What did Tom Dienhart learn about Big Ten in Week 9? Find out here! 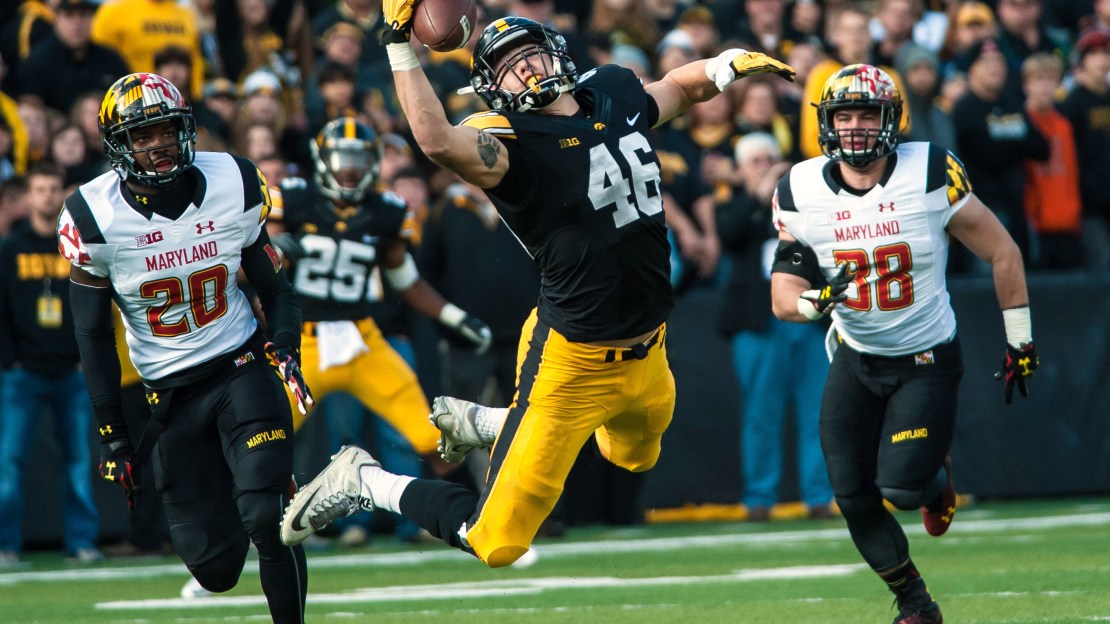 The beat goes on for Iowa, which can smell perfection from here. Purdue finally tasted Big Ten victory, while the unimaginable hard times continue for Nebraska. As for Minnesota ? that loss to Michigan is gonna leave a mark.

1. Another week, another win for Iowa. The Hawkeyes moved to 8-0 with a 31-15 domination of Maryland. Iowa doesn't wow with any one aspect of its team. It?s a well-coached group that doesn?t beat itself. It?s the patented Hawkeye formula for success. And Iowa may just go 12-0. Up next, a trip to Indiana-which could be a trapdoor. I?m just sayin?. Be careful, Herky.

2. Minnesota will relive the last two plays of the Michigan game for days ? weeks ? years ? eons. Why not kick the chippy field goal to force OT? The Gophers were at home, and the Wolverines had a backup QB in the game. Oh, well. The crushing defeat wrecked what would have been a fantastic retirement gift for Jerry Kill. Now, 4-4 Minnesota may be hard-pressed to make a bowl with games left at Ohio State, at Iowa, vs. Illinois and vs. Wisconsin.

3. Michigan, consider yourself repaid by the football gods for that loss to Michigan State. You are even, following the 29-26 comeback victory at Minnesota. Will it be three straight games that go down to the final play for the Wolverines? Probably not, because Michigan hosts Rutgers in Week 10.

The Little Brown Jug is headed back to Ann Arbor. (Photos @USATsportsImage) pic.twitter.com/YLYViSAa34

4. No program in the Big Ten needed a victory more than Purdue. Yes, Nebraska had a former walk-on making his first career start. Yes, the Huskers had five turnovers, which Purdue scored 28 points off of. Yes, Big Red lost two of its top offensive players in the first half. No matter, Purdue isn?t gonna give back this win. No way, no how. Darrell Hazell entered Saturday 1-18 in the Big Ten. The last time Purdue won a Big Ten home game, Hazell wasn?t the coach. It was Danny Hope, who beat Indiana in Ross-Ade Stadium to close the 2012 season. He was fired after the game. How crazy was Purdue?s win? It led 42-16 entering the fourth quarter but had to hang on to take the 55-45 victory after getting outscored 29-13 in the fourth quarter.

5. Things just keep getting worse for Nebraska. No matter the struggles entering Saturday's game, few people predicted the stupefying 55-45 loss to a Purdue squad that hadn?t won a Big Ten game in a year. NU had been tortured by closes losses, losing five games by a combined 13 points entering Saturday. This one wasn?t that close for an injury-riddled Huskers club. Nebraska now has six losses before November for the first time in program history. The Cornhuskers? three wins this season? South Alabama, Southern Miss and Minnesota. Remember when Huskers fans got mad at Bo Pelini because he couldn?t win the big game? Now, Nebraska just can?t win.

6. More Nebraska: The Cornhuskers? bowl hopes are probably toast. Nebraska must win its last three games to finish 6-6 to qualify for the postseason – although 5-7 can earn an invite if there aren't enough teams to fill all of the bowl slots. The Huskers? last three games? Michigan State, at Rutgers, Iowa. The program has missed a bowl just two times since 1969, missing in 2004 and 2007.

7. A team on an off week made one of the biggest headlines. Ohio State quarterback J.T. Barrett was cited for OWI early Saturday morning, and the school quickly announced that Barrett would be suspended for its next game, Nov. 7 vs. Minnesota, a week after he had seized control of the position. OSU didn?t need this tumult. In the end, the Buckeyes still should take care of Minnesota with Cardale Jones under center, but a team captain can?t be getting arrested.

8. Keep an eye on Penn State. The Nittany Lions are playing well, winning seven of their last eight games following a 39-0 demolition of Illinois. Penn State doesn't figure to win the Big Ten East, but it could have a huge impact on the race. After next week?s trip to Northwestern, Penn State plays host to Michigan and finishes at Michigan State. I don?t think many teams want any part of this Nittany Lions squad that has a strong defense and a hot QB in Christian Hackenberg.

9. Illinois just can?t run the football. And it?s ruinous to the offense. How bad has it been? The Fighting Illini have rushed for an aggregate 138 yards in consecutive losses at Iowa, vs. Wisconsin and at Penn State, averaging 46.0 yards per game on the ground. Illinois still needs two more wins for bowl eligibility. And, it may be a close call with games left at Purdue, vs. Ohio State, at Minnesota and vs. Northwestern.

10. Maryland is playing with fire under interim coach Mike Locksley. The offense has more consistency, but the defense continues to hold back the Terps, who have lost five in a row. During the losing skid, Maryland has allowed at least 28 points in each defeat. The next two games are Wisconsin and Michigan State, so big challenges loom for a team looking for success. Will the Terps win again?