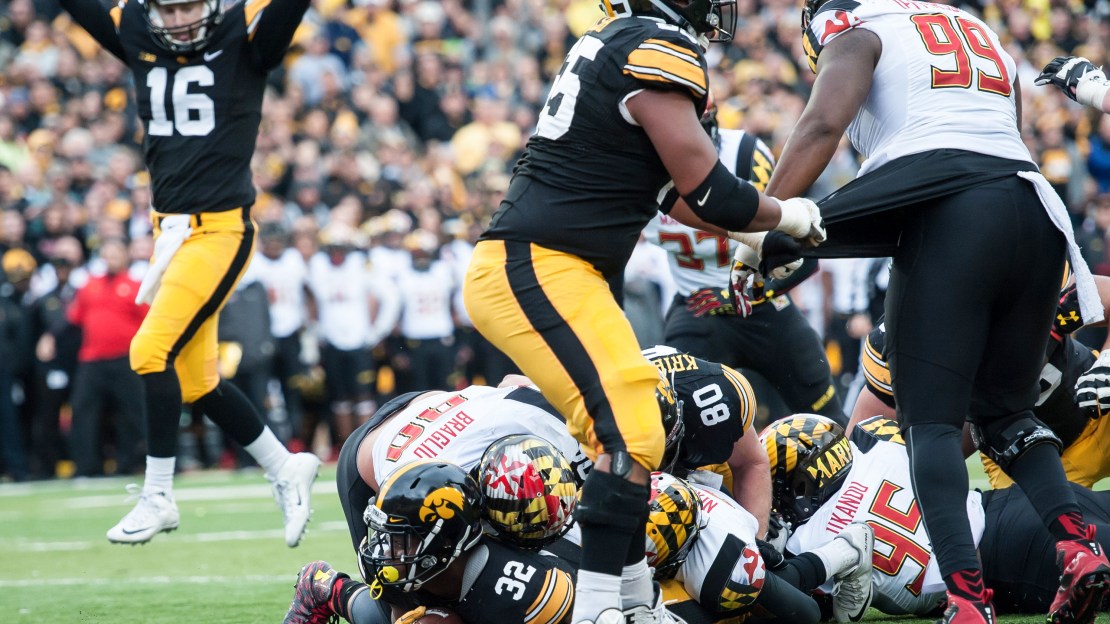 And Nebraska? It had mastered the close loss (five by 13 points entering today), but it lost by double digit to one-win Purdue team.

Biggest surprise: Tip of the hat to Purdue, which got its first Big Ten home win since 2012 with a 55-45 victory vs. Nebraska. The Boilers had scored a combined 41 points in their first three league games. The Boilermakers needed this triumph badly. It ended a five-game losing skid and provided a glimmer of hope for Darrell Hazell, who was 1-18 in Big Ten and 5-26 overall entering Saturday. You can exhale now, Purdue Pete.

Biggest disappointment: Nebraska. Yes, the Cornhuskers have been depleted because of injury and had to give former walk-on Ryker Fyfe the first start of his career. And the Huskers saw their top running back (Terrell Newby) and top playmaker (De?Mornay Pierson-El) leave early on. Still, the loss to a Purdue club on a five-game losing skid was another kick in the gut in a season that has been full of them. Now, NU is one loss from being eliminated from bowl contention and has six losses before November for the first time in program annals.

Play this again: It was great theater at the end of the Michigan-Minnesota game. The Golden Gophers are going to replay those final two plays for years. My question: With two seconds left, why not kick the chip shot field goal to force overtime? Minnesota was playing at home, and the Wolverines had a backup QB in the game. Oh, well.

Never play this again: There were a few bad ones, as Penn State whipped Penn State, 39-0, and Wisconsin drubbed Rutgers, 48-10. Let?s go with the Nittany Lions? win vs. Illinois, which never really was in this game.

Best play: Penn State RB Saquon Barkley's hurdling touchdown run. The electrifying true freshman covered some serious ground on this highlight score, taking off from the 4-yard line and coming down in the end zone. Illinois was so frustrated on the play, it ripped off Barkley's left shoe when he finally landed.

Most underrated play: Purdue TE Jordan Jurasevich's first career touchdown. Basketball season is here, and Jurasevich looked like a big man taking the entry feed down low on this touchdown grab. Look at his back to ball!

Did you see this? During a timeout midway through the first quarter, Minnesota honored recently retired coach Jerry Kill with a tribute video on the big board. It was a perfect tribute to a great coach and even better man.

Iowa. Go ahead and mock the Hawkeyes? schedule. They don?t care. All Iowa knows is that it is 8-0 and in firm control of the Big West after a resounding 31-15 over Maryland. This team?s playoff hopes burn on.

Michigan. The Wolverines bounced back from the killer home loss to Michigan State to score a 29-26 win at Minnesota that also included breath-taking drama at the end.

The Little Brown Jug is headed back to Ann Arbor. (Photos @USATsportsImage) pic.twitter.com/YLYViSAa34

Purdue. Finally, the Boilermakers won a Big Ten home game, which the program hadn?t done since downing Indiana in the final regular-season game of 2012. Darrell Hazell was 1-18 in Big Ten games, with his lone victory coming at Illinois last October. He was 0-9 in Ross-Ade Stadium in Big Ten games. This is something Purdue can build on.

Penn State. The Nittany Lions are rolling, winners in seven of their last eight games. And the offense is clicking behind Christian Hackenberg. Penn State won?t win the Big Ten East, but it could play a huge role in determining the victor with season-ending games vs. Michigan and at Michigan State after it plays at Northwestern next.

Nebraska. The misery grows for Mike Riley in his debut following a loss at Purdue that dropped the Cornhuskers to 3-6. Injuries are crushing this team, as Nebraska had to start a former walk-on at quarterback and lost RB Terrell Newby and WR De?Mornay Pierson-El in the first half. Now, the Huskers must win their last three games to become bowl eligible. And that may be tough to do. The last three games: Michigan State, at Rutgers, Iowa.

Illinois. The offense sunk to a new low in a 39-0 loss at Penn State, netting just 167 yards (130 passing and 37 rushing) and punting 12 times on 15 possessions in the Illini?s third loss in a row. Illinois had 55 yards rushing last week vs. Wisconsin and 46 at Iowa before that. That?s 138 yards rushing the last three games, as RB Josh Ferguson continues to be out with injury.

Rutgers. For a second game in a row, the Scarlet Knights got whacked. This time, RU fell 48-10 at Wisconsin. Last week, the Scarlet Knights got whipped, 49-7 at home by Ohio State. RU had 165 yards of offense (82 passing, 83 rushing) vs. the Badgers after notching just 293 vs. Ohio State. Chris Laviano hit just 4-of-14 passes for 31 yards with a pick. No doubt, RU missed WR Leonte Carroo, who missed the game with injury. The defense has allowed 149 points the last three games.

Maryland. That?s five losses in a row for the Terrapins, who lost 31-15 at perfect Iowa. And things won?t get much easier with a visit from Wisconsin next followed by a trip to Michigan State.

Purdue DB Anthony Brown. What day it was for Brown, who picked off Ryker Fife three times – yes, three times – and notched four tackles, to boot.

Wisconsin RB Corey Clement. He hadn?t played since the season opener but trumpeted his return with 11 carries for 115 yards and three TDs. Welcome back! I wonder if the Badgers would have beaten Iowa at home had Clement played.

Wisconsin S/WR Tanner McEvoy. McEvoy, per usual, was all over the place, registering four tackles, including one tackle for loss, and an interception, and running for a 20-yard touchdown in an easy win vs. Rutgers.

Penn State RB Saquon Barkley. The true freshman totaled 142 yards and scored a touchdown, a highlight-reel score, at that, in Penn State's shutout victory vs. Illinois.

Iowa DB Desmond King. The Big Ten's interception leader picked off another pass, returning his seventh pick of the season 88 yards for a touchdown vs. Maryland. He also recorded five tackles.

Minnesota QB Mitch Leidner. Yes, he got stuffed on the goal line on the final play of the game, but Leidner played well. He completed 16-of-33 passes for career-high 317 yards with a TD. He also ran for 37 yards and a TD.

3, kicks returned for TDs by Maryland?s Will Likely this season. He ran back a kickoff 100 yards for a TD at Iowa. He has two punt returns for TDs this year, too.

9, Purdue?s Big Ten losing streak that it snapped with the win vs. Nebraska.16, consecutive wins for Michigan at Minnesota, a streak that spans to 1977.

79-21, the combined score Nebraska had beaten Purdue the last two seasons. The Huskers thumped the Boilers, 44-7, in West Lafayette the last time it visited in 2013. Purdue won Saturday, 55-45.

29, fourth-quarter points for Nebraska at Purdue ? and it still lost.

30, points Wisconsin has allowed at home this season in six games.

70, second-half points in the Nebraska at Purdue game in which the Boilers led 21-9 at halftime and won 55-45.

123, yards receiving for Nebraska?s Jordan Westerkamp on nine catches with a TD.

103, yards receiving for Wisconsin?s Alex Erickson on six catches with a TD.

4th & 7 for @BadgerFootball? Watch Alex Erickson convert it into a touchdown. https://t.co/puDxfyUCnr