Dienhart: Hackenberg has Penn State rolling down the stretch 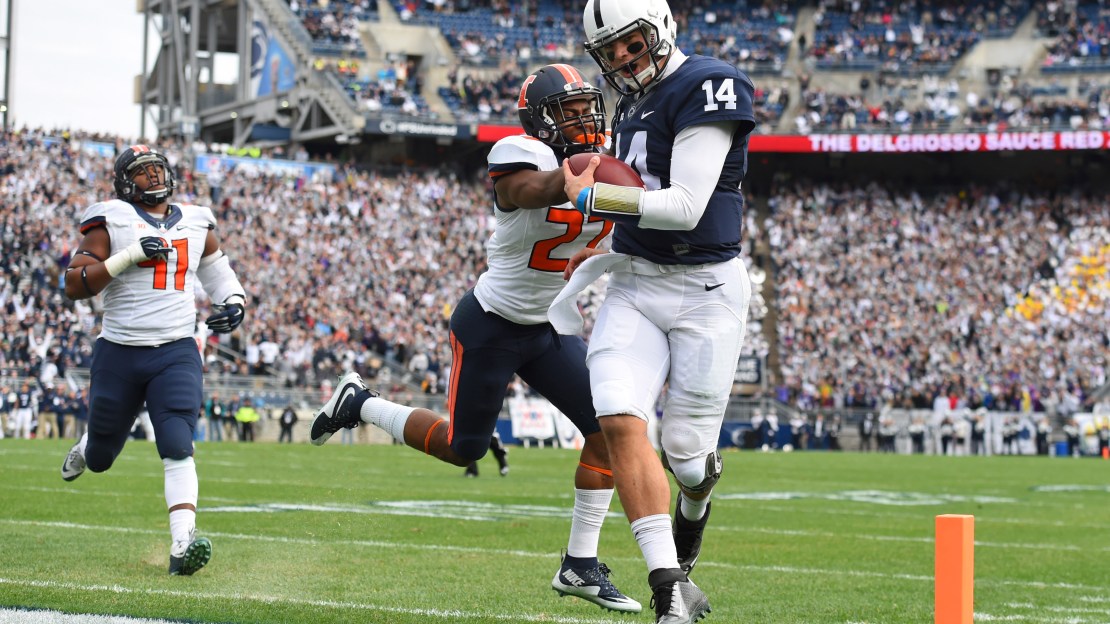 It all looked so easy for Christian Hackenberg.

And on it went all afternoon for the Penn State junior signal-caller in a dominating 39-0 win vs. Illinois in which he hit 21-of-29 attempts for 266 yards with two touchdowns. He even caught a 14-yard TD pass. It?s all clicking for Hackenberg in 2015, his third season in State College. And, it?s shaping up as his best season yet for a Penn State team that has won seven of its last eight games-and will be a wild card in the Big Ten East race in November.

Hackenberg is leading the parade, playing the best ball of his career as the season hits the home stretch. He?s playing more like the guy who was hailed as the nation?s top prep quarterback upon inking with Penn State back in 2013. But the weight of expectations often has been burdensome for Hackenberg, especially during a 44-sack 2014 season in which he sometimes showed his frustrations.

But it?s all working right now for a quarterback and team that is 7-2 and poised to shape the rugged Big Ten East race. The Nittany Lions play at Northwestern next week. Then, after a bye, Penn State finishes the season vs. Michigan and at Michigan State, two teams in the thick of the division chase. Getting by this Nittany Lions squad won?t be easy.

No doubt, it?s good to be Franklin. And Hackenberg, too. Last week, he set school records against Maryland, passing Zack Mills for the most career passing yards and attempts. Hackenberg has 45 touchdown passes and he needs one more to tie Matt McGloin for the most in school history.

In the last six games, Hackenberg has thrown for 1,415 yards with 12 touchdowns and no interceptions. His 315-yard performance against Maryland was his most since the Pinstripe Bowl against Boston College last year and it was his most in a regular season game since Sept. 6 of last year against Akron.

"That helps everything," Hackenberg said. "Helps our pass game, our screen game and being able to run the football, obviously.

?I think it?s one of those things where it?s fun to watch a kid who has that much talent. You?re just happy he?s on your team and you?re able to turn around and hand the ball to him and he?s just going to continue to get better. I love his mindset and I love his work ethic. He is extremely hard on himself, but I look at that and see he has a ton of more room for growth. I?m excited about his future and his career and his future with our football team.?

The receiving corps also teems with promising talent and may be the most underrated group of wideouts in the Big Ten. There is Chris Godwin, DaeSean Hamilton, DeAndre Thompkins, Geno Lewis and Brandon Polk. On this day, Godwin was the top star, catching seven passes for 76 yards and a TD. Hamilton chipped in four grabs for 54, Thompkins two for 31, Lewis a pair for 15 and a score and Polk one for six. Hackenberg was on the money all day.

?Christian, he?s a great player,? said Godwin. ?We go through adversity each and every week and each week we just try to have a little less and less adversity. We have to fight through that as an offense and especially as a team.?

The defense carried its weight, too, as Penn State pitched a shutout and allowed only 167 yards (130 passing, 37 rushing) vs. Illinois. That is the fewest allowed by the Nittany Lions this year, and the fewest since holding Minnesota to 138 yards (37 rushing, 101 passing) in 2009.

#PennState with first shutout of a conference opponent since a 20-0 victory against Minnesota on 10/17/2009. #NittanyLions

Want more? Penn State's defense had four sacks today, giving them sacks in 31 consecutive games. That is the most consecutive games with a recorded sack since sacks became an official NCAA statistic in 2000. And the defense had nine tackles for loss today, the 16th straight game with at least five TFLs, which is the longest since a 38-game streak from 1997 to 2000.

?They just dominated us,? said Illinois interim coach Bill Cubit. ?They dominated in every phase.?

Cubit has that correct. Was this the most complete effort for the program since Franklin arrived?

Franklin is correct about that. And now, he has his team primed for a strong and impactful finish.