Dienhart: Jerry Kill was one of game's best coaches, people 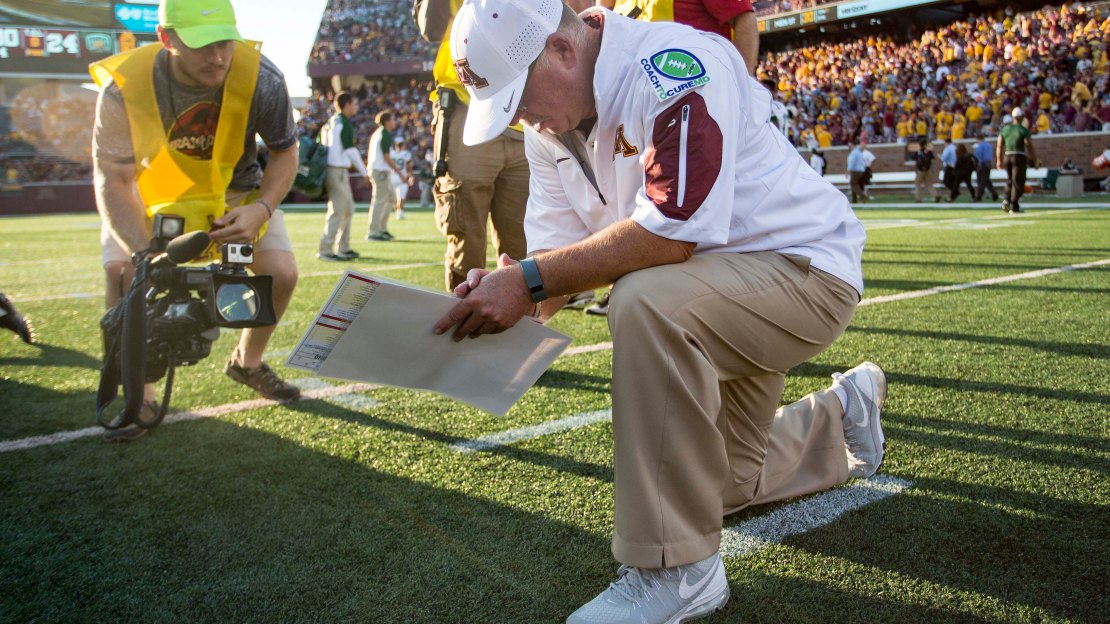 I shouldn?t have been surprised to see the e-mail. But, I still was caught off guard.

There it was, glowing on my computer screen: ?University of Minnesota head football coach Jerry Kill announced this morning that he is retiring from his position effective immediately due to health reasons.?

And, just like that, the sport sees one of its best coaches and people step aside. Talk about rocking your world.

?There is no question in my mind that the program is better,? said Kill. ?It?s been a group of people who made it better, not just Jerry Kill.?

Even in the spotlight of Wednesday?s announcement, Kill wanted others to get credit. He didn't want it to be about him. Never has. But that was unavoidable on this sad day.

We all hope the 54-year-old Kill will be OK health-wise for the long-term. His issues with seizures and epilepsy, as well as a battle with cancer, are well-documented.

Kill had two seizures Tuesday and still went to practice. Enough was enough. Kill says he never had listened to a doctor but wanted to heed the advice this time because of his family. This stuff makes the pursuit of winning football games look trivial.

?I don?t want to be a liability,? said Kill. ?I don?t want somebody to have to worry about if I?m going to drop on the field. ? My wife, two kids, brother and Mom need me more down the road.?

Kill always impressed me with his authenticity. He was genuine, the real McCoy, in an era where images and personas are well-managed and manicured among a growing flock of look-at-me-visor-wearing coaches who coin corny mantras and live to jab others with dopey press conference quotes.

That wasn?t Kill. He wasn?t interested in tweeting at rappers in this increasingly self-absorbed, selfie-taking world. And he never boasted about things like ?having a schematic advantage.? Kill was singularly focused on winning football games and building better people. And, he always wanted to earn his keep.

?I said from the day I came in, I would not steal from the university and I have not,? Kill said.

That quote sums up Kill perfectly. In short, he was a handshake-is-my-word kind of guy from a black-and-white Andy Griffith era who was as pure as his modest Cheney, Kansas, roots would suggest. This is a ball cap-wearing guy from a roll-up your sleeves family who was the first to graduate from college. No way he was gonna let his family down. Kill was gonna make something of himself-and make the world a better place. He did just that for the countless players that he coached over the years at places that ESPN GameDay could care less about on a Saturday morning.

That?s what I liked about Kill: His resume. He worked his way up the backwaters of college football at often remote and out-of-the-way schools on the fringes of the sport. Kill wasn?t a silver spoon coach who got high-profile jobs at a young age because he had a famous daddy. Nope, this is a guy who established his coaching roots at off-Broadway places. And, fittingly, the guy who earned his chops away from the spotlight of the big conferences played linebacker at some college called ?Southwestern? in Kansas. Perfect. You see, Kill never forgot where he came from ? but he always knew where he was going. Every place he ever coached, he left a better place. And, that?s what it?s all about it.

It didn?t take Kill long to move up the coaching ranks, landing his first head coaching job in 1994 at the age of 33 at Saginaw Valley State. How many people want that job? Kill raised his hand. He saw opportunity. He had a career to build, mouths to feed, young men to groom as people and football players. He was off and running.

"Last night, when I walked off the practice field … I feel like a part of me died," Kill said.

Now, just like that from out of the blue ? Kill is gone. He has no idea what his future plans will be.

?I don?t know,? he said. ?I (haven?t) done anything else. ? I?m just trying to survive the situation.

?I can?t do what I love anymore. ? I?ve done this for 32 years. ? that takes a lot out of anybody. God is probably telling me it?s time."

Football will miss him.

The Minnesota program will be in good hands with defensive coordinator Tracy Claeys running things. He has stepped in previously to lead the team when Kill has battled health issues. But what does the future hold for the Gophers?

This is a school still recovering from a scandal that caused athletic director Norwood Teague to step down in August amid sexual harassment allegations. Now, this.

Minnesota is without one of its best football coaches in the last 50 years. Will the program be able to maintain its momentum?

This has been a challenging year in Dinkytown for a team that looked primed to contend for the West Division title coming off a breakthrough 8-5 season (5-3 Big Ten, second-place finish in the West) that saw the school earn its first New Year?s Day bowl bid since the 1961 season. But the Golden Gophers have been wracked by injury and an inconsistent offense, holding a 4-3 overall record and 1-2 Big Ten mark as they hit the home stretch of the season looking to secure a fourth bowl bid in a row. Minnesota will have to carry on without Kill.

Another job well done. You will be missed, Jerry Kill. Godspeed, my friend.