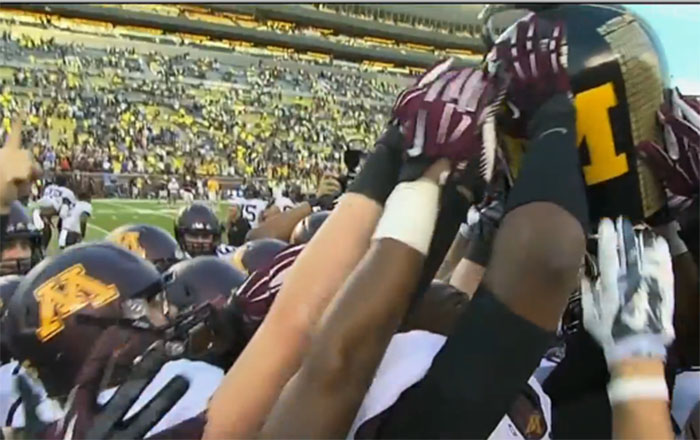 Week 9 is another light menu, with just five games for a second week in succession. Indiana, Michigan State, Northwestern and Ohio State are off this Saturday.

The week is highlighted by the Little Brown Jug clash between Michigan and Minnesota, which the latter claimed for the first time since 2005 last season at Michigan Stadium.

Also of note: Iowa comes off an open week looking to stay unbeaten atop the Big Ten West vs. Maryland.

Here's my preview for all five Week 9 Big Ten games:

Two teams headed in opposite trajectories. The Scarlet Knights are still smarting from a 49-7 beat-down vs. Ohio State. Defense has been an issue all season for Rutgers. Against six FBS opponents, the Scarlet Knights have allowed nearly 503 yards per game. Against the Buckeyes, Rutgers allowed 528 yards and 7.5 yards per play. In the last two games, RU has yielded a combined 101 points. Conversely, Wisconsin?s defense is very stingy. The Badgers are allowing 11.1 points per game, which is the second-fewest nationally. They have allowed an aggregate 20 points in five home games this season and shut out RU last season, 37-0. Rutgers might see a different Wisconsin offense. Bart Houston replaced the injured Joel Stave (head) and played well against Illinois, throwing for 232 yards with two touchdowns and two interceptions. Stave is going through concussion protocol but isn't expected to miss any time. RB Corey Clement might return. He hasn?t played since the season opener against Alabama while recovering from a groin injury. The o-line will miss C Dan Voltz, out for the season after hurting a knee last week. The Badgers need this victory to stay on the heels of West front-runner Iowa, while a RU loss will push it closer to bowl extinction with a fifth defeat.

The Fighting Illini are looking for bowl eligibility after losing two games in row, at Iowa and vs. Wisconsin. The offense has been a drain, especially a run game that ranks last in the Big Ten (125.7 ypg). WRs Mikey Dudek (who will take a medical redshirt) and Justin Hardee haven?t caught a pass all year, and fellow WR Marchie Murdock has missed the last two games. The absence of RB Josh Ferguson the last two games (shoulder) has sucked big-play ability out of the attack. How bad has it been? The Fighting Illini scored 96 points combined in their first two games. They have scored 88 points combined in their last five games. Meanwhile, a once-maligned Illinois defense has allowed just one team to score 30 or more points all season. Illinois will find a hot Christian Hackenberg. The Nittany Lions QB is playing some of his best football. He?s thrown for 1,149 yards with 10 touchdowns and no interceptions in his last five games, becoming the school?s all-time leading passer last week. The Penn State defense is a curious study. The Nittany Lions allowed a season-high in total yards with 466 and 30 points to Maryland last week. However, they forced five turnovers and had 11 tackles for loss. Penn State leads the nation in sacks with 31 and faces an Illinois team that has allowed just eight sacks, which is the fewest in the Big Ten.

Here are two teams desperate for success. The Cornhuskers are coming off a dispiriting home loss to Northwestern, putting bowl hopes in serious jeopardy. Nebraska needs a 3-1 finish to reach six victories. The Boilermakers? bowl hopes will end with another loss in what?s looking more and more like another lost season in West Lafayette. Close games have been a bugaboo for the Huskers. NU?s three wins this season have been by a combined 70 points. Its five losses have been by a combined 13 points. QB Tommy Armstrong wore a boot on his right foot this week. If he can't go, Ryker Fyfe would start. The Boilermakers are coming off a bye searching for answers on both sides of the ball. Football is about blocking and tackling. And Purdue can do neither, ranking No. 13 in the Big Ten in rushing (134.9 ypg) and last in rushing defense (198.1 ypg). Until this program gets better in the trenches, talk of improvement at other positions is moot. How dismal has the Darrell Hazell era been? Purdue is 1-18 in Big Ten games under his stewardship, including 0-9 at home in league tilts. And eight of those nine home Big Ten losses have come by double digits. Want more? Hazell is 2-26 vs. FBS foes.

The Hawkeyes look to continue their surprising unbeaten march coming off a bye. Iowa?s off week came at a perfect time, as the Hawkeyes are beat up at some key positions. QB C.J. Beathard played hurt during most of the Northwestern game with what is believed to be a groin injury. RB Jordan Canzeri left the NU game with a lower leg injury and didn?t return. No problem, as Akrum Wadley filled the void by running for a career-high 204 yards and tying a school-record with four touchdowns. Maryland will arrive in Iowa City looking to taste success, riding a four-game losing skid. The Terps have averaged 29 points in their last two games after being held to just six points combined against West Virginia and Michigan. QB Perry Hill is coming off a big game, notching 349 total yards and two TDs. But defense remains an issue for the Terps, allowing at least 28 points in five of its seven games. The Terps allowed 31 points to a Penn State team that hadn?t scored 30 points in a conference game in their previous 11 tilts under James Franklin. And Maryland will be pressed trying to stop an Iowa ground game that is No. 2 in the Big Ten (214.4 ypg), as Maryland ranks 13th in the conference in rushing defense (175.6 ypg).

Both squads are coming off byes, well-rested to battle for the historic Little Brown Jug. Michigan lost the Jug last year, falling 30-14 in Ann Arbor in the ?Shane Morris concussion game.? The defeat snapped a six-game Wolverine winning streak against the Gophers. Michigan has won 15 straight games in Minneapolis, last losing in 1977. The last time Minnesota beat the Wolverines in consecutive seasons? It was 1962-63. This is the start of a brutal stretch for Minnesota, as it is going to play three Top 20 teams in a row (at Ohio State, at Iowa after the Wolverines) in a run that could derail the season. Michigan is coming off a crushing home loss to Michigan State. It will look to get its ground game going. The Wolverines were held to just 62 yards rushing on 33 carries vs. the Spartans. They had just one run over eight yards. Can QB Jake Rudock do enough to win games when the running game isn?t working? The Gophers could find the sledding tough vs. a rugged Michigan defense. Minnesota is last in the Big Ten in scoring, averaging 20.4 points. They have scored more than 27 points just once all season. The Wolverines are No. 1 in the Big Ten in scoring defense (9.3 ppg). A usually stout Minnesota defense is coming off a tough outing vs. Nebraska. The Gophers hadn?t allowed more than 27 points all season but allowed 48 to the Cornhuskers, which was the second-most in a game under Jerry Kill.