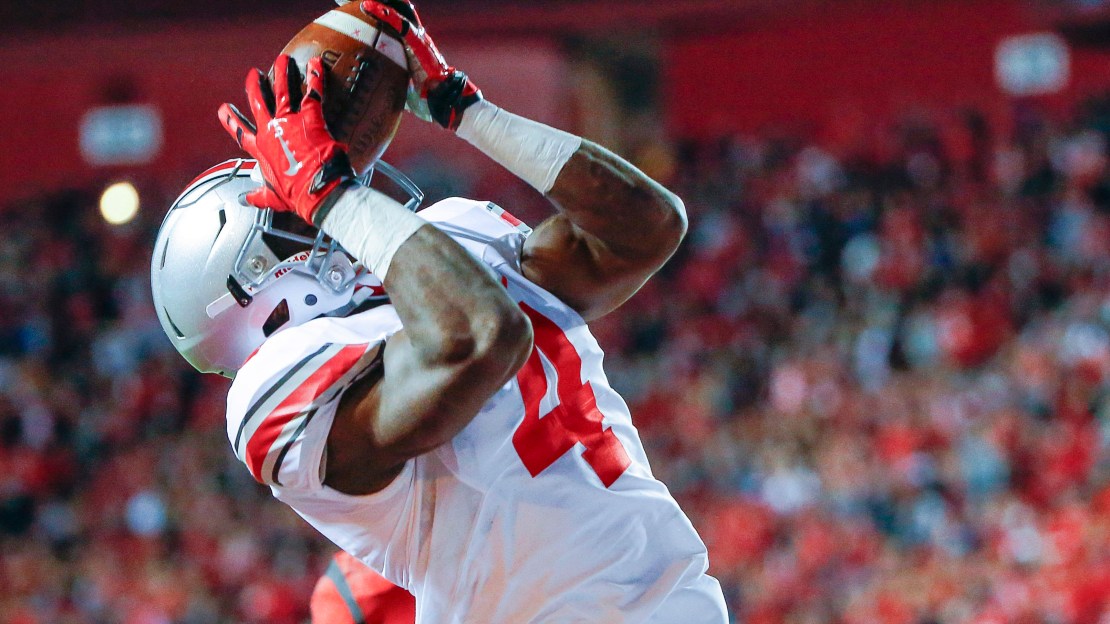 The Big Ten had an abbreviated slate on this Saturday with just five games. But one message was loud and clear: Ohio State is still king. Oh, and this, too: Northwestern is alive and kicking.

Biggest surprise: The Northwestern offense showed life. The unit scored a combined 10 points with 366 yards the previous two games, losses at Michigan and to Iowa. But at Nebraska, the Wildcats tallied 30 points with 333 yards. And QB Clayton Thorson took a big step in his development as a passer.

Biggest disappointment: Nebraska. It looked like Nebraska may have gotten on track after a 48-25 win at Minnesota last week. But the Huskers took a step back with another blown fourth-quarter lead in a 30-28 home loss to Northwestern that left them 3-5 with little wiggle room as they pursue a bowl bid.

Cornhuskers fans applauding the @NUFBFamily buses as we depart Memorial Stadium. Such a unique fanbase, 100% courteous in victory & defeat.

Play this again: The Maryland-Penn State game in Baltimore was a fun back-and-fourth affair that featured seven lead changes and eight turnovers in what was a 31-30 Nittany Lions win. Yes, this rivalry continues to bloom.

Never play this again: Ohio State 49, Rutgers 7. The final score speaks the truth-this game never was in doubt, as the Buckeyes put together one of their most complete efforts of the season. This is how the No. 1 team in the nation is supposed to play. The Scarlet Knights just happened to be in the way on this night, getting outgained 528-293.

Best play: Braxton Miller's circus catch. Sure seems like the quarterback-turned-receiver saves his best for under the lights, doesn't it? You remember the spin move in the season opener at Virginia Tech. Well, now there's this incredible catch. The ball deflected off so many things!

Did you see this? Brutus had some fun at Rutgers' expense, following its only score of the night.

Brutus mocks Rutgers getting to use its cannon: https://t.co/UzaK8mW0D8 pic.twitter.com/z6EMnxAskn

Northwestern. The Wildcats rediscovered their stride with an impressive 30-28 victory at Nebraska. That ended a brutal two-game losing skid that had seen Northwestern lose at Michigan and vs. Iowa by a combined 78-10 after opening the season 5-0. Now, the Wildcats are 6-2 and bowl eligible for the first time since 2012.

Wisconsin. The Badgers stayed on the heels of Iowa in the West Division with a 24-13 win at Illinois. This is one of the most resourceful teams in the Big Ten, as it overcame the loss of QB Joel Stave in the first quarter (head) and still won with backup Bart Houston. UW also played without RB Corey Clement for a seventh game in a row.

Penn State. The 31-30 win vs. Maryland wasn?t pretty-few wins by the Nittany Lions have been this year. But the victory makes Penn State bowl eligible for a second season in a row under James Franklin.

Indiana. For a while, it looked like the Hoosiers may spring an upset at Michigan State. But it turned into another loss, the fourth in a row for Indiana after a 4-0 start. Next up are back-to-back home games vs. Iowa and vs. Michigan for an IU team looking to reverse its fortunes. The season ends at Maryland and at Purdue. Will the Hoosiers make a bowl?

Nebraska. After rollicking over Minnesota, the Cornhuskers suffered another tough loss, falling 30-28 to Northwestern. It was Nebraska?s third home loss of the season (BYU, Wisconsin, Northwestern). The Huskers need to win three of their last four to get bowl eligible. NU has missed a bowl just two times since 1969. The Cornhuskers missed bowls in 2004 and 2007 under Bill Callahan.

Illinois. The Fighting Illini had a great shot to score another big home win after knocking off Nebraska earlier this year. But Illinois fell 24-13 to Wisconsin. An inability to run the ball haunts the Illini, which carried 13 times for 55 yards with just 333 yards overall. Illinois still needs two more wins for bowl eligibility.

Northwestern QB Clayton Thorson. His passing got better as the day progressed, finishing 13-of-28 passes for 177 yards with a TD. (He had 16 yards passing at halftime.) And the redshirt freshman also ran nine times for a game-high 126 yards and a TD with a long run of 68 yards.

J.T. Barrett?s now accounted for 50 touchdowns in his career.

Penn State QB Christian Hackenberg. He completed 13-of-29 passes for 315 yards and three touchdowns in the win vs. Maryland. In the process, Hackenberg passed Zack Mills as the all-time leading passer at Penn State.

Wisconsin WR Alex Erickson. He was a force, leading the team with 81 yards rushing and a TD on just four carries and also catching a team-high 10 passes for 96 yards and a score.

Michigan State QB Connor Cook. He hit 30-of-52 passes for a career-high 398 yards-second most in a game in school annals–and four TDs vs. Indiana.

Wisconsin QB Bart Houston. He came off the bench for an injured Joel Stave and completed 22-of-33 passes for 232 yards with two touchdowns and two interceptions.

Northwestern DE Dean Lowry. He made a school-record six tackles for loss with two sacks and 10 tackles vs. Nebraska.

Dean Lowry can send today's tape right to the NFL. That was one of the best defensive games I've seen. 6 TFLs and 2 sacks. #Northwestern

13, combined points Nebraska has lost its five games by.

87, plays for Nebraska compared to just 56 for Northwestern. But the Cornhuskers only outgained the Wildcats, 373-333.

191, passes thrown in a row by Illinois? Wes Lunt without an interception, a streak that ended today vs. Wisconsin.

8, turnovers in the Maryland-Penn State game, five by the Terps-including a clinching pick by the Nittany Lions in the final minutes to ice the game.

46-0, how much Indiana has been outscored in the fourth quarter of the last two games.

12, road losses in a row for Indiana, the fourth longest active streak in FBS.

21, wins in a row for Ohio State, the longest streak in the nation.

19, tackles by Rutgers LB Steve Longa in loss to No. 1 Ohio State.

128, yards receiving for Michigan State?s Aaron Burbridge on eight receptions with a TD.

72, yards on Nick VanHoose's interception returned for a touchdown at Nebraska.

108, yards receiving for Indiana?s Simmie Cobbs, Jr., on five catches with a TD.

11, TFLs for Penn State, which also had four sacks and forced five turnovers vs. Maryland.

9, interceptions in 2015 for Illinois, which had only seven last season.

0, regular-season Big Ten losses for Urban Meyer, who is 28-0. His lone loss to a league foe was vs. Michigan State in the 2013 Big Ten title game; penalties for Ohio State at Rutgers.