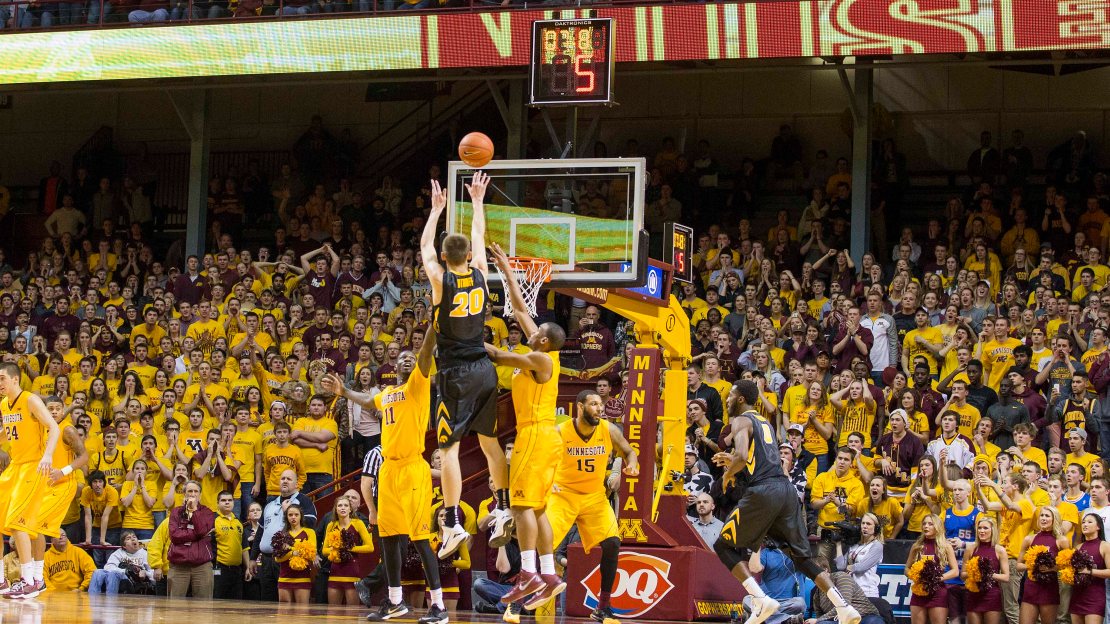 It's been reported and talked about it a lot since it became official. The shot clock in men's college basketball is going from 35 seconds to 30 seconds this season.

How will the five-second change impact the game, the players and the coaches?

BTN analyst Jon Crispin and his brother Joe Crispin, both former Penn State basketball players, take a look at what the shortened shot clock will do to the game below.

In all my years as a professional, I never heard a single player say, ?Man, I wish we had more time to shoot!? To the pros, the 24-second shot clock is so normal, so routine, and so freeing that to imagine a different number on that clock is near impossible. That?s obviously not the case in college hoops, so the change to a 30-second shot clock is a hot topic this season.

There are many reasons why. People talk about points and possessions, both of which are true. But there are deeper reasons why less is more when it comes to the shot clock. Efficiency is a primary one.

It?s not rocket science. The less time you have to shoot, the more efficient you need to be with the time you have. You can?t dilly dally. You have know what you do best and get into what you do best as efficiently as possible in order to win each possession and therefore, the game. It may not seem like much (in my opinion it is not enough!), but  five fewer seconds should lead to less wasted time on offense and therefore, better basketball action. Walking the ball up the court and then running fake offense for 15 seconds won?t cut it anymore. Again, efficiency is key. You need to make the defense work by making the defense make as many defensive decisions as possible. You need to attack quicker and with more consistency. This changes the game, for the greater good.

It also means something for defense, so maybe, Jon, you can tackle that.

I find it comical that my brother passes it off to me to talk about defense and what the new 30-second shot clock means for the ?other? side of the ball. Some things never change. The point Joe makes is spot-on, and I don?t think many basketball enthusiasts (coaches included) would argue with the logic behind his reason. The truth is, the world of college basketball is not as simple as we all (again, coaches included) probably wish it was. Additionally, the difference between the college and the professional game is not just size and speed?it?s knowledge and experience. It?s why I?d say that coaching at the collegiate level is more important than at any other level in sports. Talent and skill certainly helps, but the right combination of scheme and culture wins championships.

While at Big Ten Media Day, I noticed that this topic was top of mind for a great majority of reporters in the room. Every season we have officiating ?Points of Emphasis? and certain rule changes, but this one was the first question for most every coach. Most coaches seemed amenable to the change but generally agreed that the first result of the reduction in the shot clock would be more bad shots.

As I read into and peeled back the layers of the cryptic responses to reporters, I got the sense that coaches didn?t feel confident that their players and/or opponents would be comfortable playing fast. One of the best ways for a coach to develop a young player is to create a system for them to thrive in. A system with rules and structure to adhere to. Bo Ryan at Wisconsin has certainly done just that. While the Badger offense has opened up quite a bit since the Dick Bennett days (Joe and I had to contend with both Bennett and Ryan), there is definitely a level of control that the players grow to understand and commit to. That seems to be what gives a lot of great coaches cause for pause with the new rule change. More trust and power has to be given to the five on the floor as there is simply less time for structure and carefully crafted execution.

Five to 10 years from now, we won?t even be talking about it. It will just be what it is and we?ll likely be debating how it should be 24 seconds instead of 30. Certain coaches will have to adapt their system and their scheme a bit to make sure they are able to find rhythm and balance with the shortened shot clock. I sure like the change because, ultimately, it means more possessions and more shots!