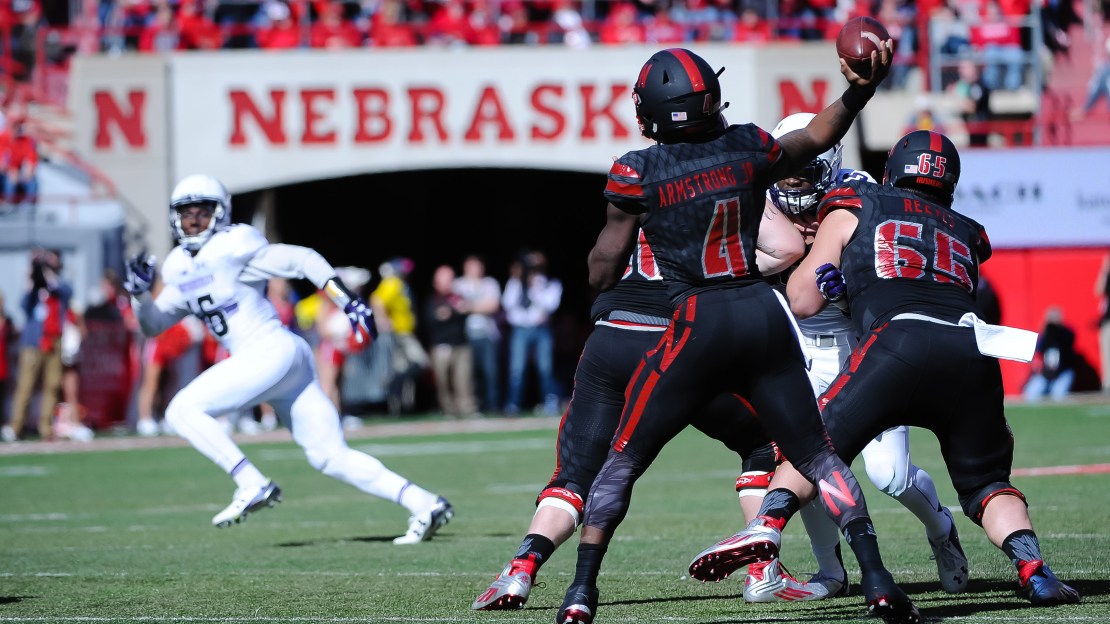 Nebraska?s strange, curious and often-painful ride continues. It?s difficult to watch. But, it?s hard not to stop, stare and wonder if the Cornhuskers ever will turn the corner in 2015.

The latest cruel twist: a 30-28 home loss to a Northwestern team that was coming off two blowout losses that had seen it lose by a combined 78-10. So, if you are keeping track in Lincoln ? or Scottsbluff ? or Kearney ? and I know you are ? the Cornhuskers now how five losses by a combined 13 points this season.

"All right, that's a really disappointing game for us,? said Mike Riley in the aftermath. ?All those things that we talked about and thought were making some strides in some ways, like balance, run/pass ratio, all that stuff didn't look too good today.?

No, it didn?t. Forty-eight passes! Remember when the Huskers used to run the ball, then run it again, and again, and again? Nebraska sledge-hammered foes with its famed triple-option attack all the way into college football lore in winning national championships. Now, the program and its iconic ?N? logo continue to search for solid footing and an identity as it chases a place among the elite of the sport.

?One of the biggest problems we had today was having a hard time blocking their front to run the football,? Riley said. ?That part of it was tough sledding. We ended up with some rushing yards, but a lot of them were, I think, some ad-lib stuff as we went. I think that was a key, key issue in the game."

The program hasn?t won a league title since 1999 and last played for the national championship after the 2001 season. Can Riley deliver Nebraska to the Promised Land? Time will tell. But this season certainly has been a bizarre journey that has fans on the edge. And, it?s not over yet.

– There was the Hail Mary loss to BYU.

– There was the wasted fourth-quarter comeback at Miami (Fla.) and subsequent overtime loss.

– There was the inexplicable last-minute collapse at Illinois.

– There was the last-second loss to Wisconsin.

And now, this: A third setback in 2015 in their own football house of worship to Northwestern, a week after it looked like the Huskers may have turned a corner in a 48-25 victory at Minnesota. Riley?s message after the latest kick in the gut?

"Well, I told them we're going to coach football and practice football on Monday, and we're going to continue to work to get better,? Riley said. ?Everybody that wants to do that will be there. I think that this group will be."

Riley is unflappable. He?s calm, he?s cool, he?s collected. There never is a hint of panic in his voice. But even he couldn?t have envisioned such a torturous debut and has to feel his trademark level-headedness wavering.

It wasn?t supposed to be like this. Riley left the cushy comfort of Corvallis, Oregon, and his fiefdom of Oregon State to jump into one of the hottest cauldrons in college football. Riley could have ridden out a fine career at Oregon State. He was 61-years old. A revered native son who had made the once woebegone Beavers into a respectable program. But then, his phone rang. It was Nebraska athletic director Shawn Eichorst. Wanna come coach at one of college football?s holiest places?

"It is truly an honor to join the University of Nebraska family," Riley said at the time of a hire that surprised the nation. "Though we love Corvallis and Oregon State, this is a once-in-a-lifetime opportunity to coach at one of the nation's most storied football programs and I can't wait to get started."

A once-in-a-lifetime opportunity. No doubt about that. That?s why Riley is in Lincoln. Jobs like this are difficult to get. This is Nebraska football, for crying out loud! Everything that happens is news across the Cornhusker Nation, which prides itself on its unwavering love and support of all things Nebraska red. It?s an obsession ? a religion ? a torrent love affair. And with that type of emotional investment, that type of passion, emotions can run high-just like expectations. And no one expected Nebraska to have five losses in a season-let alone before Halloween. The coach the Cornhuskers chased out of town never lost more than four games in a season and won at least nine in seven campaigns with seven bowl bids.

Will Nebraska make a bowl this season?

The program has sat at home just two times since 1969. The natives aren?t restless ? they are stunned. They passed restless long ago.

When the season dawned, there were some faint hopes for a West Division title. Now, just trying to get to six wins is a goal. Games remain at Purdue, vs. Michigan State, at Rutgers and vs. Iowa for the 3-5 Cornhuskers. Can Nebraska go 3-1 to finish the season?

"Football is a crazy game,? said wideout Jordan Westerkamp. ?Lots of ups and downs. It's kind of a roller coaster ride and we're on it right now in full force, but we'll be OK. We have great coaches here, great team, great players and they know what's important and they're mature guys. We're all mature, and we'll be OK. We'll stay together, we'll keep this thing going, we'll stay positive, we'll get back and have a great week at practice and get ready for Purdue."

What?s in store around the next corner of this wild ride? Hold on and close your eyes.