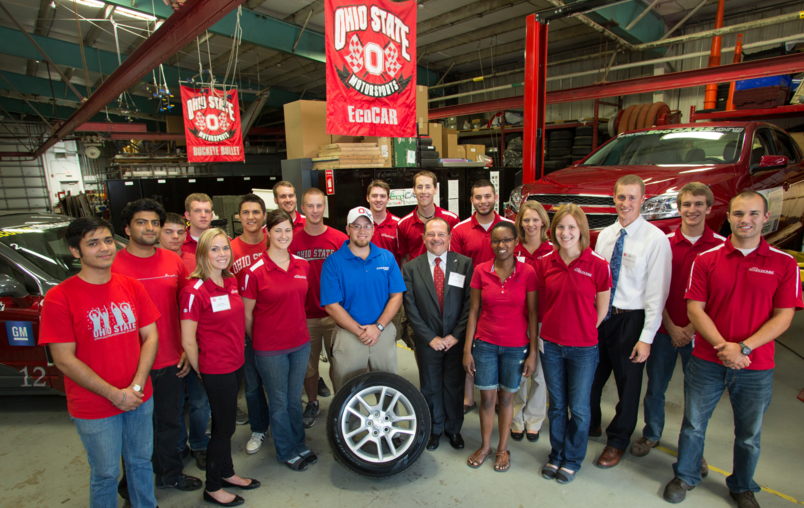 For a long time now, The Ohio State University has been a formidable presence in college athletics. Now the Buckeyes are finding themselves leading the pack in another team effort: energy efficiency in automobiles.

Ohio State?s 40-person crew placed first in the EcoCAR 2 National Competition last year, where they re-engineered a Chevy Malibu to travel on electric power and produce far less harmful emissions. They were also awarded the top spot in Year One of the three-year EcoCAR 3 competition this June.

According to M.J. Yatsko, a graduate student in mechanical engineering and EcoCAR team member, they had to get creative to come away with the big prize.

?We did a lot of really cool and outside-the-box things,? said Yatsko, who?d participated in the EcoCAR program since she was in high school. ?We did our own engine calibrations, which is something that no other team does, and we also automated a manual transmission.?

Andrew Huster, one of the team leaders, said that the car is meant not only to cut back on emissions, but to do so in a way that makes it an affordable option for the public.

[btn-post-package]?It really makes a difference, not just in terms of like the emissions and the harm to the environment that emissions cause, but in terms of the costs that the driver of the automobile would actually incur,? he explained. ?That?s something that everyone can understand.?

While there are big expectations for the OSU team heading into the next year of the EcoCAR 3 competition, Huster stressed just having the opportunity to get this experience has been pivotal for his future success. Not to mention very enjoyable.