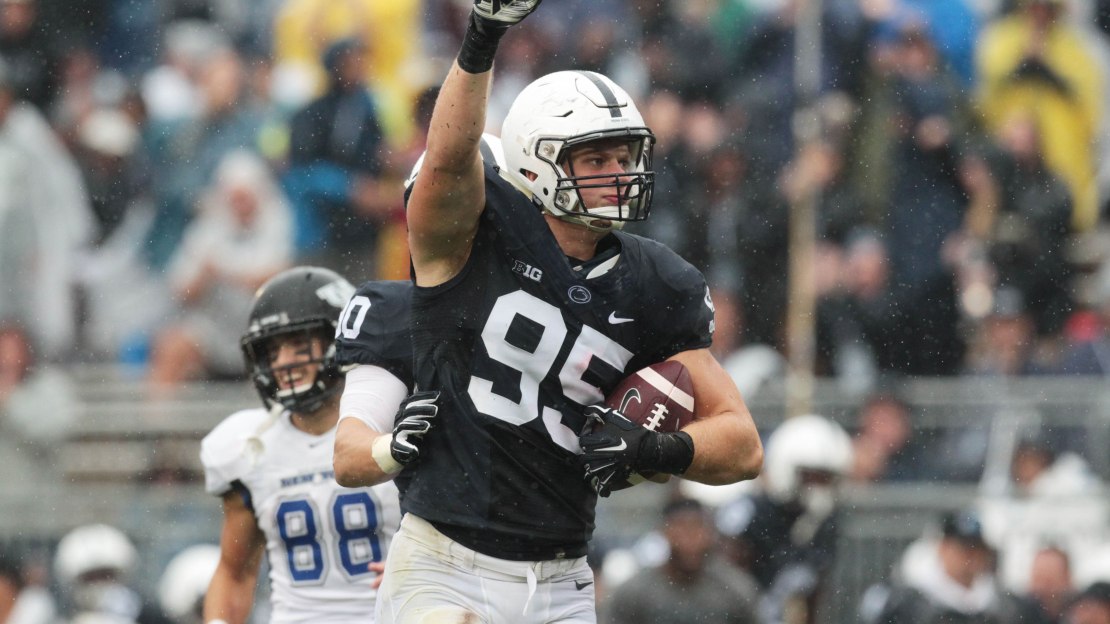 Some felt MAYBE Nassib could break out and contribute as a pass rusher with Deion Barnes and C.J. Olaniyan gone, but Nassib has done more than breakout. He has become arguably the best defensive player in the Big Ten. Not bad for a former walk-on.

If you are reading this, you probably are a crazy sports fan whose perspective can get out of whack. David Jones of Pennlive.com wrote just how Michigan punter Blake O?Neill has kept his infamous gaffe in perspective amid the ?sports crazies? out there who have been hyper critical of him. It?s a lesson for all of us.

A couple of interesting opposing options on Ohio State QB Cardale Jones. In one corner, Bill Landis of Cleveland.com thinks Jones losing his job may be good for his NFL stock.

Landis says there was a prevailing thought after last year's national championship that Jones had played himself into the first round of the NFL Draft, but such thoughts were a bit misguided because playing your way to that kind of esteem in what was a three-game audition is incredibly difficult.

The Sporting News debated the topic. It?s rather interesting.

A little basketball for you on this Friday with a look at the flexibility of Indiana that could make its offense so deadly.

With Yogi Ferrell, James Blackmon, Robert Johnson and Troy Williams returning, and McDonald's All America big man Thomas Bryant added in, IU might have one of the country?s most productive offenses in 2015-16.

Be honest with yourself, Northwestern: What needs changing?

Kevin Trahan of InsideNU.com points out that Iowa took a hard look at its program after last year?s 7-6 disappointment ended in a brutal bowl loss to Tennessee. The Hawkeyes knew something had to change. And, the staff made some alterations, most of the mild. Now, Iowa is 7-0 and thinking Big Ten title.

So, Northwestern, time to be honest with yourself. This team has gone 5-7 for two straight seasons. That is bad. And this season has the potential to go down the drain fast, as a 5-0 start has melted into a 5-2 mark. The offense, despite recruiting so well, has been terrible over the past few years, from the wide receivers to the offensive line. The scheme has been bad and players haven't executed. This week?s game at Nebraska will be telling.

Speaking of Iowa, here is a nice podcast from HawkCentral.com with Rick Brown, Chad Leistikow and Ross Peterson, who say there is nothing lucky about Iowa?s 7-0 start. Nope. It?s legit. That said, in this good midseason review from the AP, they call the 7-0 start "a surprise." Also true.

Great news at Minnesota, which will break ground on a long-overdue Athletes Village on Oct. 30.

The university raised just $76.5 million, but school president Eric Kaler recommended borrowing the remaining $89.5 million for the project, which includes an academic center and practice facilities for football and basketball.

"He can make a difference anywhere he is," junior corner Jourdan Lewis said this week of Peppers. "He's an ultimate playmaker and a competitor.

"Honestly, I haven't seen too many guys like that in my life."

Is there a more exciting player in the Big Ten right now than Peppers? Not to me, but we could have a good debate on that.