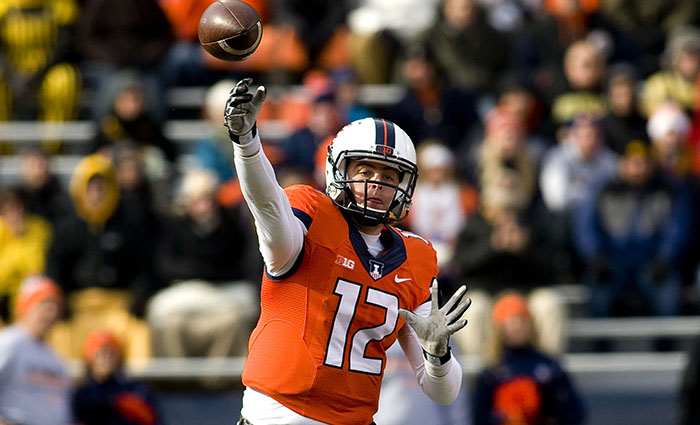 If you happened to watch the late afternoon portion of action a week ago, then you were a witness to some of the most historical moments in recent Big Ten history.

Then in Bloomington, less than a year after pulling off their largest comeback win in school history, Rutgers erased a 25-point third-quarter deficit to take down Indiana by a 55-52 score. The Scarlet Knights tied the record for the largest comeback in school history, which was set last November when they rallied from 25 points down to top Maryland.

Elsewhere, Nebraska scored 48 in a win at Minnesota, Wisconsin picked up its fifth victory of the season against Purdue, Iowa kept its perfect season intact with a 30-point win at Northwestern, and top-ranked Ohio State improved to 7-0 with a win over Penn State.

With four Big Ten teams not in action, there are just a handful of games around the conference this weekend. Our showcase matchup on BTN will feature Wisconsin traveling to Champaign for a Homecoming matchup with Illinois at 3:30 p.m. ET. A win for the Badgers would make them eligible for yet another bowl appearance for the 14th consecutive season, the longest active streak of any team in the Big Ten. The Illini on the other hand look to push the Badgers hopes for their sixth win of the season one week back.

But, there are more than just bowl eligibility hopes on the line here. The winner of this game will be in second place in the West Division; a game behind Iowa in the loss column. The loser will have an uphill battle to catch the Hawkeyes since both teams have already lost to Iowa.

It?s going to be a very important matchup which will have a major effect on the standings. So, here are five facts you should know when you tune into this weekend?s game on BTN.

1. Wisconsin?s new and successful passing attack is an unprecedented weapon for the Badgers. If someone asked you who was the currently leading the Big Ten in passing yards per game during conference play, would you be surprised if they told you it was Wisconsin? Well, they?re right. The Badgers are currently averaging a league-high 292.7 passing yards per game in Big Ten play. Just for perspective, Wisconsin has not led the conference in passing offense during league play in any season since 1963: (170.0 ypg). And that new-found passing attack is credited to the play of fifth-year senior Joel Stave, who in his first six games this year surpassed his entire 2014 season totals for completions (147) and passing yards (1,708). Stave has also thrown for over 300 yards in each of his last two games, becoming the first Wisconsin quarterback to do so in Big Ten play since Jim Sorgi in 2003. If he goes for over 300 this weekend against the Illini, he will join Randy Wright (in 1983) as the only two QBs in school history to pass for 300-plus yards in three straight games.

2. Illinois is also reaping the benefits of an impressive and accurate passing game this season. Speaking of success through the air, redshirt junior quarterback Wes Lunt is coming off his fourth career 300-yard passing game for the Illini. Two weeks ago against Iowa, he completed 25-of-42 passes for 317 yards and a touchdown. Impressively, Lunt connected on 11 straight passes at one point in the game and went 19-for-27 for 228 yards in the second half alone. Lunt has now thrown 23 touchdowns against just five interceptions in his career at Illinois. He is currently one of just four active FBS quarterbacks who have thrown four times as many touchdowns as interceptions, while also passing for 200-plus yards per game since the start of last season (min. 400 attempts). He joins Arizona?s Anu Solomon, USC?s Cody Kessler, and Western Kentucky?s Brandon Doughty. Lunt enters this weekend?s action having not thrown an interception in his last 157 consecutive pass attempts, currently the fifth-longest active streak among all FBS quarterbacks.

3. Illinois running back Josh Ferguson has caught and run his way into select company. Ferguson, who missed the Illini?s game at Iowa with a shoulder injury, is just 55 yards away from becoming the fourth player in program history to surpass 4,000 career all-purpose yards. He is currently one of only three active FBS players with more than 2,000 career rushing yards (2,259) and 1,000 receiving yards (1,305), joining Oregon State?s Storm Barrs-Woods and Arizona State?s D.J. Foster. Will he be ready for this weekend?s matchup with Wisconsin? If he does go, Ferguson has a legitimate shot to break the current Illinois record for career all-purpose yardage held by Robert Holcombe (4,737). With six regular season games remaining on the schedule for the Illini, he?ll have to average 132.0 yards per game to do it.

4. History will be made regardless of which team comes out victorious this weekend. With a win over Nebraska three weeks ago, the Illini posted their fifth consecutive victory at Memorial Stadium, dating back to last season. A win on Saturday would give the Fighting Illini their first six-game home winning streak since between the 2001 and 2002 seasons. In fact, it would be just the fifth time since 1970 that Illinois would have won six in a row at Memorial Stadium. On the other side of the field, Wisconsin comes into this weekend?s matchup having won four straight road games for the first time since 2006-2007. But here?s where it gets really wild. The Badgers have not won five straight road games over any period since a six-game road winning streak between 1906 and 1909.

5. The barometer for Wisconsin?s road success in conference play has been ?20?. The Badgers have scored 20 points or more in each of their last 29 conference road victories. That is currently the longest active streak among all Big Ten teams and tied for the seventh longest in the FBS. The last time the Badgers won a conference road game when scoring fewer than 20 points was an 18-6 victory at Penn State on Sep. 22, 2001. Putting that in perspective for this weekend?s matchup with Illinois, Wisconsin has not been held under 20 points at Memorial Stadium since a 22-6 loss to the Fighting Illini on Nov. 2, 1991.