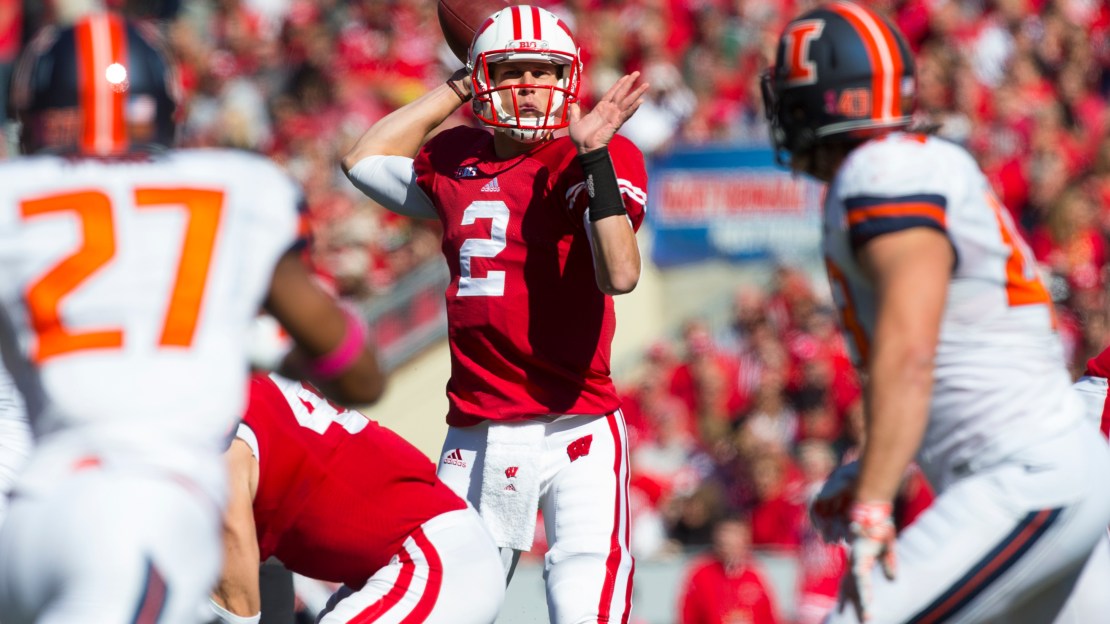 A truncated week of action with just five games, as Iowa, Michigan, Purdue and Minnesota are off. The big news: Ohio State has a new starting quarterback in J.T. Barrett.

Well, he?s really the old quarterback. If you recall, Barrett was named Big Ten QB of the Year in 2014 after leading the Buckeyes to a 12-0 mark before getting hurt in the regular-season finale. But, the staff tabbed postseason hero Cardale Jones the starter at the beginning of the season.

Now, after seven weeks of a sometimes odd and often difficult to understand working relationship between Barrett and Jones that didn?t seem to be benefiting anyone, Urban Meyer has opted to go with Barrett. Will this stick? I hope so. Barrett is the better fit for what Meyer wants to do on offense, as he is a superior runner/passer than Jones. This offense needs to hit its stride before the season-ending 1-2 punch of Michigan State-Michigan.

On to the games ?

Northwestern?s 5-0 start has morphed into a sobering 5-2 reality, getting outscored 78-10 the last two weeks. The Wildcats dropped out of the polls after their second straight loss. They were 13th in the AP Poll just two weeks ago. If this descent seems familiar, you are correct. In 2013, Northwestern started 4-0 and was ranked 16th in the country. The Wildcats lost marquee games against Ohio State and Wisconsin, which was the start of a seven-game losing streak. This year, Northwestern lost marquee games against Michigan and Iowa. Northwestern?s lack of offense is starting to catch up with it. The Wildcats are 117th nationally in scoring (19.6), 115th in total offense (331.6 ypg) and 119th in passing (141.1 ypg). Nebraska brings some mojo into this game, coming off an easy win at Minnesota in a season fraught with gut-wrenching losses. The Huskers? leaky pass defense likely won?t be exploited by the Wildcats? feeble passing game. Meanwhile, the Nebraska offense is coming off a big game, with QB Tommy Armstrong throwing for 261 yards and three TDs and RB Terrell Newby running for 116 yards on just 13 totes.

Each team is coming off an emotional result-one of agony, the other of ecstasy. The Hoosiers blew a 25-point lead at home and lost on a last-second field goal to Rutgers on Homecoming. The Spartans won on an impossibly crazy ending at Michigan, turning a botched punt into the winning TD on the last play of the game. Will both teams be flat? The Hoosiers need a win to get back on track. After opening 4-0, IU has lost three in a row. Michigan State remains unbeaten and in the playoff hunt despite not really excelling all season. This club just seems to have an aura about it. Good news for Indiana: The Spartans have had issues against spread teams. They are 10th in the conference in pass defense, allowing more than 231 passing yards per game. The Hoosiers lead the conference in passing, averaging 284 yards per game. Nate Sudfeld threw for a career-high 464 yards against Rutgers. Michigan State has won 10 of the last 11 games against Indiana, including the last six. Michigan State?s last loss in the series came in 2006 in Bloomington. The Spartans haven?t lost at home to IU since 2001, winning five straight since.

The winner of this game will be in second place in the West Division, a game behind Iowa in the loss column. The loser will have an uphill battle to catch the Hawkeyes since both teams have already lost to Iowa. Illinois is still battling injury. RB Josh Ferguson looks like he?ll be out again after missing the Iowa game with a shoulder injury. WR Marchie Murdock (thigh) also figures to be out. RB Ke?Shawn Vaughn got dinged in the last game (stinger) but is ready to go. The Badgers defense could make life tough for Illinois. They are ranked third nationally in scoring, allowing just 10.9 points per game. However, that unit hasn?t been as good away from Madison. They allowed 35 points to Alabama and 21 to Nebraska. Wisconsin has been winning with the passing of Joel Stave instead of its usual punishing run game. In Big Ten play, the Badgers have 878 passing yards and just 329 rushing yards. RB Corey Clement (sports hernia) dressed last week but didn?t play. Is this the week he returns for the first time since the opener? Illinois has lost nine of the last 10 games against Wisconsin, including the last five. Its last win in the series came in 2007 in Champaign, 31-26.

This will be 2nd appearance for Gray Ghost unis.

This is the first time these teams are playing in Baltimore since 1991, when Penn State won 47-7. Last year?s meeting, at Penn State, created some bad blood, as Maryland refused to shake hands at the coin toss and incurred a penalty. The Terps went on to win. PSU hasn?t forgotten. Maryland is going through transition. This will be the first game as interim coach for Mike Locksley, who replaces the recently fired Randy Edsall. Maryland needs to win four of its last six games to become bowl eligible. Penn State saw its five-game winning streak end at Ohio State last week. Maryland could have its hands full with Nittany Lions RB Saquon Barkley. He ran for 194 yards at Ohio State and is averaging 8.4 yards per carry on his last 67 attempts and has run for 566 yards in his last four games. Maryland?s defense allows 197 yards per game on the ground and is last in the conference in scoring defense, allowing 34.7 points per game. They are also 13th in the conference in rushing (196.8 ypg) and total defense (457.7 ypg).

The QB spot remains a hot topic in Columbus. This week?s bomb shell: J.T. Barrett will make his first start of the season. Cardale Jones has started each game. But over the last two games, Barrett emerged as a red-zone threat. Last week, with Jones struggling to move the ball, Barrett took over midway through the third quarter and never left. Barrett and Co., shouldn?t have much issue moving the ball vs. a porous RU defense. Led by RB Robert Martin, the Scarlet Knights may have success running the ball and are confident coming off an amazing 25-point rally at Indiana in a wild 55-52 game won on a last-second field goal. The Buckeyes allowed Indiana?s Zander Diamont to run for a 79-yard touchdown. Maryland?s Perry Hills ran for 170 yards and Penn State?s Saquon Barkley had 194 rushing yards. Ohio State ranks 11th in the conference in rushing defense, allowing 158.7 ypg. The Buckeyes can pound the rock, too, running for 315 yards vs. Penn State last week. The game will feature arguably the Big Ten?s best running back in Ohio State?s Ezekiel Elliott, who has rushed for over 100 yards in 12 consecutive games, and top wideout in Rutgers? Leonte Carroo, who caught seven passes for 157 yards and three touchdowns at IU before leaving with an ankle injury. He has nine touchdowns on 21 catches this season (in just 14 quarters). Carroo says that he will definitely play against Ohio State.