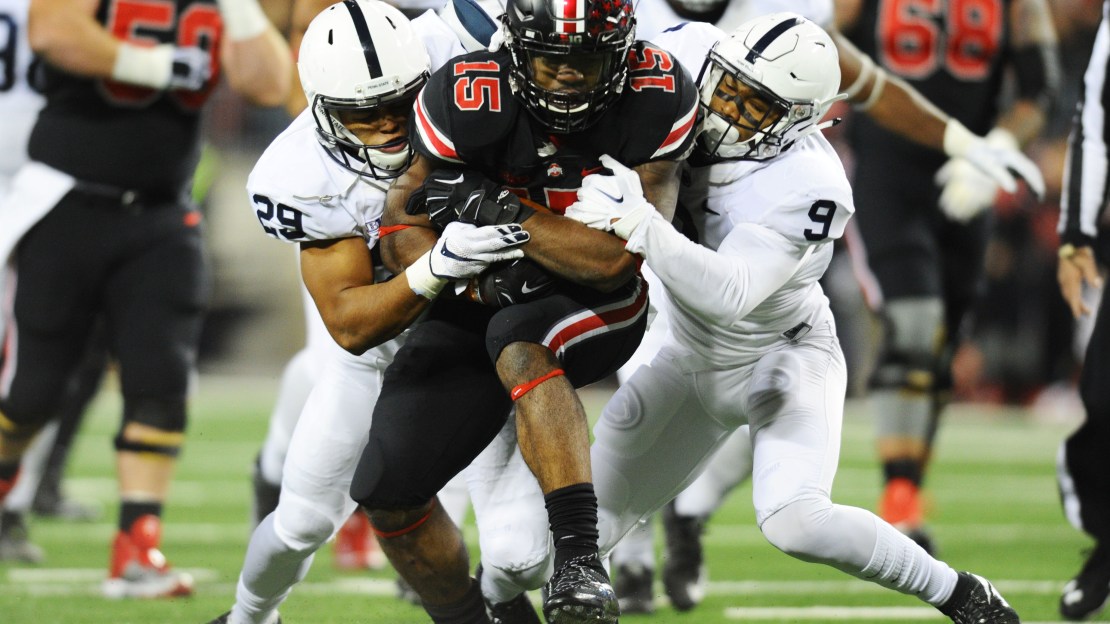 Week 7 of the Big Ten football season was filled with plenty of outstanding individual performances. Ohio State running back Ezekiel Elliott had another great week, but was it enough to keep him in the top spot of our player rankings?

2. Leonte Carroo, WR, Rutgers. He continued to torch defenses last week, nabbing seven passes for 157 yards and three touchdowns before leaving with an ankle injury. On the season, Carroo has nine touchdowns on 21 catches (in just 14 quarters). For his career, he has 28 touchdowns on 104 catches, meaning 27 percent of his catches go for TDs. Amazing. Opponents can?t stop Carroo. They only can hope to contain him. And, even that seems to be impossible.

3. Carl Nassib, DE, Penn State. Think Joey Bosa without the hype. Yes, that?s perfect. The 6-7 monster on the edge of the Nittany Lion defensive line continues to author a monster senior season that so far has him No. 1 in the league in sacks (11.5) and No. 1 in tackles for loss (15.5).

4. Joe Schobert, LB, Wisconsin. This guy epitomizes Wisconsin football, a Dairy State-bred kid who dreamed of being a Badger. Now, he?s not only a Badger. He?s a great Badger. Like Nassib, Schobert is a former walk-on-turned-defensive-wrecking ball. And he?s right behind Nassib in sacks (9.1) and TFLs (14.5), helping give Wisconsin one of the top defenses in the Big Ten that ranks No. 2 in scoring (10.9 ppg) and No. 2 overall (272.3 ypg).

5. Connor Cook, QB, Michigan State. His numbers don?t wow, but they are good: 57 completion percentage; 1,672 yards passing; 13 TDs; two interceptions. Best of all: 7-0, which is the Spartans? record. Against Top 15 teams in his career, Cook is 5-2. In those seven games, he?s averaged more than 310 yards passing with 14 touchdowns and seven interceptions. Want more? Cook is 30-3 in his career, which is the best winning percentage (90.9 percent) among active FBS quarterbacks. All hail Cook!

1. Ezekiel Elliott, RB, Ohio State. Just another casual 100-yard game for Elliott this week. The Heisman hopeful rushed for 153 yards and a touchdown in OSU's 38-10 win over Penn State. Elliott has now topped the 100-yard rushing mark in 12 straight games, dating back to last season. He is on pace to rush for 1,700 yards in the regular season. If you throw in a Big Ten championship game and a playoff game, or two, this guy could top the 2,500-yard mark this year. That's incredible!

2. Leonte Carroo, WR, Rutgers. Can anyone stop Leonte Carroo? Simple answer — no! He has played in four games this season, and has already hauled in 21 catches for 472 yards and a Big Ten-best nine touchdown catches. That means 43 percent of his receptions this season go for touchdowns. Are you kidding me? Simply amazing.

3. Connor Cook, QB, Michigan State. He's not putting up the Heisman-type numbers many expected, but Cook is still enjoying a really good senior season. He ranks among the Big Ten leaders in passing yards (1,672) and touchdowns (13), but most important, he has the Spartans rolling with a perfect 7-0 record. Not only does he sport the best winning percentage among all active FBS quarterbacks, but he also has the most wins of any Michigan State quarterback in program history. What a special talent.

4. Carl Nassib, DE, Penn State. Where did this guy come from? He leads the nation in sacks with 11.5, which is three more than the next non-Big Ten player. But ready for the most impressive stat? Nassib has 15.5 tackles for loss, which accounts for more than 44 percent of his total tackles this season! That might be the most impressive stat in college football this year.

5. Nate Sudfeld, QB, Indiana. This guy is quietly having a historic season for the Hoosiers. Sudfeld leads the Big Ten in both passing yards per game (290.2) and passing efficiency (156.4) heading into Week 8 of the college football season. He is on pace to pass for more than 3,100 yards and 20 touchdowns this season. He is the engine that makes this offense go.