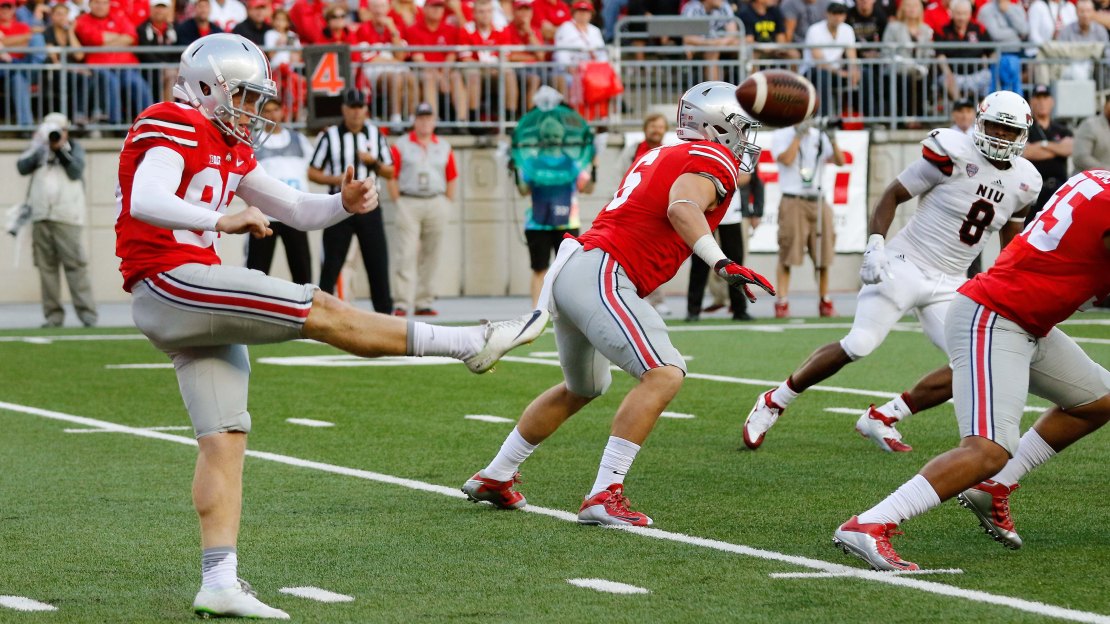 Still can?t get enough of the wild end to the Michigan State at Michigan game? Jon Solomon of CBSSports.com looked into the history of Wolverine Aussie punter Blake O?Neill. And Solomon unearthed some interesting stuff, as O?Neill?s Australian rules past may have contributed to his last-play fail.

And then there is this: Mark Dantonio says he missed the postgame handshake with Jim Harbaugh but says no issues loom between them.

"It's one of those things, you're just not there at the time, but there's no problems between myself and coach Harbaugh," Dantonio said Monday morning on WDFN. "I have the utmost respect for him. I think he's doing a tremendous job, and I think they have a good football team, a well-coached football team."

With all of the postgame hysteria, it?s easy to see why the coaches never met.

Who has been the Buckeyes? best player so far? Could it be punter Cam Johnston? He often has bailed out an Ohio State offense that has been inconsistent. Turning over the field has been huge.

"He's unbelievable," Ohio State senior left tackle Taylor Decker said. "He's probably one of the most talented guys on our team. Coach will say, 'Kick it on the 8-yardline,' and he'll hit it right on the 8-yardline. He's unbelievably talented and he's huge for us. He can flip the field and get the defense in a great position and in turn that will get the offense in a great position."

Cleveland.com notes that Johnston is fifth in the nation in net punting at 42.2 yards per punt, and that's without being able to really boom it most of the time. He has dropped 14 of 33 punts inside the 20 and the Buckeyes have given up a total of 35 punt return yards all year.

If the great Mike Hlas of the Cedar Rapids Gazette types it, it must be true. And he says the Hawkeyes should be 11-0 on Thanksgiving as they head to Nebraska for the regular-season finale. I agree. The combination of a hot/talented team and soft schedule should continue to dovetail into a love of success for Iowa.

Lee Barfknecht of Omaha.com says Northwestern faces a crossroads game when it visits Nebraska this Saturday.

That may be a huge understatement. The Wildcats are sinking after a glitzy 5-0 start that had them No. 13 in the AP poll and included chest-thumping wins vs. Stanford and at Duke. Now, two losses in a row by a combined 78-10 have cast doubt on this Northwestern team. The offense is especially anemic. And the defense is taking body blows, too.

?The team has got to make a decision,? Pat Fitzgerald said. ?It?s between the team that won five games and was making plays all over the place, or the team that the last two weeks quite frankly is devoid of making plays.?

Yes, Wisconsin is still in the West Division hunt, but it needs to solve red-zone issues.

"I just always feel like there's one play every drive whether it's a penalty, a missed opportunity to make a play," senior wide receiver Alex Erickson said after UW's 24-7 victory over Purdue.
"There's just something like that that's just stopping us or putting it to a halt. But we'll watch the film and clean it up and we'll go from there."

The Badgers may be able to overcome red-zone issues vs. Purdue. But it may prove fatal against better teams. Remember the Iowa game? Having a better rushing attack would help. Maybe Corey Clement will play this week.

The offensive line issues just won?t go away at Penn State. And, seven games into the season, the problems probably won?t be solved. That will take an offseason and more recruiting and developing.

Through Penn State?s first seven games of the season, opposing defenses have sacked Christian Hackenberg 24 times. That averages out to 3.43 sacks per game, which is sixth-worst in the FBS. This is becoming last year all over again.

This is interesting: Maryland says it wants to excite the fan base with its next move at coach with an "outsized personality" that is very similar to former head coach-in-waiting James Franklin.

"You want a face for the franchise, someone who is a solid communicator not only with players but with the media at large, with donors and alumni," said T.J. Brightman, president of A. Bright Idea, a communications and advertising agency headquartered in Bel Air. A Penn State graduate, Brightman cites Franklin and Texas A&M coach Kevin Sumlin as examples.

As this Baltimore Sun story notes, as a Maryland assistant in 2009, Franklin was promised $1 million if not elevated to head coach. But athletic director Debbie Yow left for North Carolina State and her replacement - Kevin Anderson - considered "coach-in-waiting" agreements divisive. With no guarantee he would be Ralph Friedgen's successor, Franklin left for Vanderbilt before Maryland's coaching search began in December 2010, then became Penn State's coach in 2014. Don?t you wonder how things may be different in College Park had Maryland let Franklin be head coach?

Good news: Michigan State?s Jalen Watts-Jackson has been released from a hospital.

"Jalen told us that as he dove into the end zone, a Michigan player (Jake Butt) tried to snatch him back, and that's when the dislocation occurred," said Rich Jackson, his father. "Jalen is down that he's out for the season, but we found out his injury isn't as severe as we first thought. Even with the injury, he said he'd do it all over again."