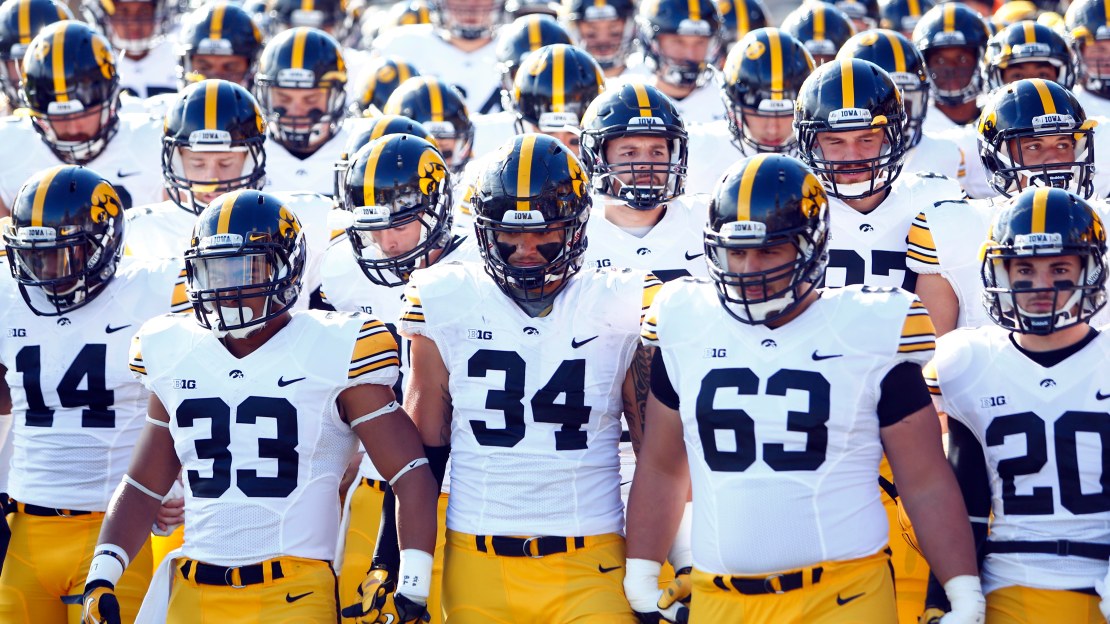 As I reach into my Big Ten Mailbag, I find a lot of letters that are Iowa-related. So, let?s roll up our sleeves and have it! It?s mail bag time!

You certainly could make a case for Iowa being No. 3. I love the Hawkeyes and what they have done. But I think Michigan is still better-even with two losses. The Wolverines have fallen on the road to AP No. 3 Utah and at home to AP No. 7 Michigan State in one of the craziest endings in college football history. I have a difficult time holding that against the Wolverines. I wonder how Iowa would have done at Utah and at home vs. MSU. And on a neutral field, I think Michigan is the better team than Iowa, too, for what it?s worth. The season is barely half over. So, expect fluctuations. If Iowa keeps winning, it will rise. And, looking at its schedule, Iowa should keep winning, while the Wolverines have a game vs. Ohio State.

If Iowa wins out in the regular season, will it be playoff contenders, or is the Hawkeyes? schedule too weak? – Benjamin Ditri

Iowa does have a decent shot to run the table. Check out the Hawkeyes? remaining slate after they are off this week: Maryland; at Indiana; Minnesota; Purdue; at Nebraska. That season-ending junket to Lincoln could be tough. But otherwise, Iowa should be favored in every other game-and maybe vs. the Huskers. If the Hawkeyes win the Big Ten with a 13-0 mark, I think they?ll be in the playoffs-weak schedule or not. Don?t worry. I just couldn?t see an unbeaten Big Ten champ not in the playoff.

When I saw Ohio State defensive end Joey Bosa bull rush that 300-pound offensive lineman for Penn State and take him back 10 yards, I was impressed! He will be the No. 1 draft pick, no doubt. – Rusty Taylor

I am nodding my head in agreement. But, honestly, I have expected more from Bosa this season than what he has delivered. He has 9.0 tackles for loss and just 2.5 sacks, most certainly the result of receiving more attention from opposing offensive lines. Not bad. But Bosa had 21 TFLs and 13.5 sacks last season. Perhaps his game vs. Penn State will spark Bosa to a big finish.

I am a Terp alum, and a huge fan! What will it take for us to get a top coach like Lane Kiffin to grace our sideline? – Earl

Maryland has a lot going for it. In fact, I think it is a sleeping giant. The school sits in a prime recruiting area. And it is investing in facilities. Plus, the school has a big booster in Maryland alum and Under Armour CEO Kevin Plank, who would like to see the school become the ?Oregon of the East.? That?s a lot to sell and should attract some top candidates.

Do you think Urban Meyer and Jim Harbaugh will turn into Bo and Woody? – Joe Ciavone

It very well could. Both have their program humming. Meyer is in his fourth year in Columbus and has been about as close to perfection as you can be. He is 45-3 overall and 27-0 in Big Ten regular-season games with the 2014 national title on his resume. Harbaugh has made a smashing debut at Michigan with a 5-2 start and seems to have the Wolverines primed for greatness. The key will be how long each coach stays at his respective school. Meyer?s longest stay: six years at Florida. Harbaugh?s longest stay: four years at Stanford and with the 49ers.

What is ailing Purdue? Is it coaching, or talent? – John McShane

The program doesn?t seem to be gaining traction in its third year under Darrell Hazell, who is 5-26 overall and 1-18 in the Big Ten. Three of his victories have been vs. FCS foes. His two FBS wins: Western Michigan and Illinois. What?s the issue? I?m guessing it?s a bit of everything, with talent and depth still needing to be enhanced. And I?m sure the coaches would tell you they could do a better job, too. Building a program is a long, painful process that requires patience.

So Penn State is going to breeze right through Maryland, Illinois, and Northwestern? Don't think I agree with you on that one. PSU's offensive line is struggling. QB Christian Hackenberg may not make it another game, as he's been beaten up so much. – Greg

No doubt, the Penn State offense is still finding its way, ranking No. 12 in the Big Ten in scoring (23.0 ppg) and No. 13 overall (339.7 ypg). Better line play would help, but injuries at running back hampered the attack, too. This is still a young, developing program. The Nittany Lions may not breeze by the Terps, Illini and Wildcats, but they have a good shot to win those games.

Minnesota is going to win the West? You should know better. – Scott E.

Yes, my bad. I apologize. This team just doesn?t appear to have it this season. It has been challenging and frustrating for Jerry Kill, I am sure. Injuries have hurt the o-line and bogged down an offense that lacks explosiveness. I was a year off on Iowa, picking it to win the West last season, so maybe my incorrect prediction will mean good things are in store for the Gophers in 2016?

Do you think Iowa will win the Big Ten? – Dawn

That would be a resounding ?YES!?