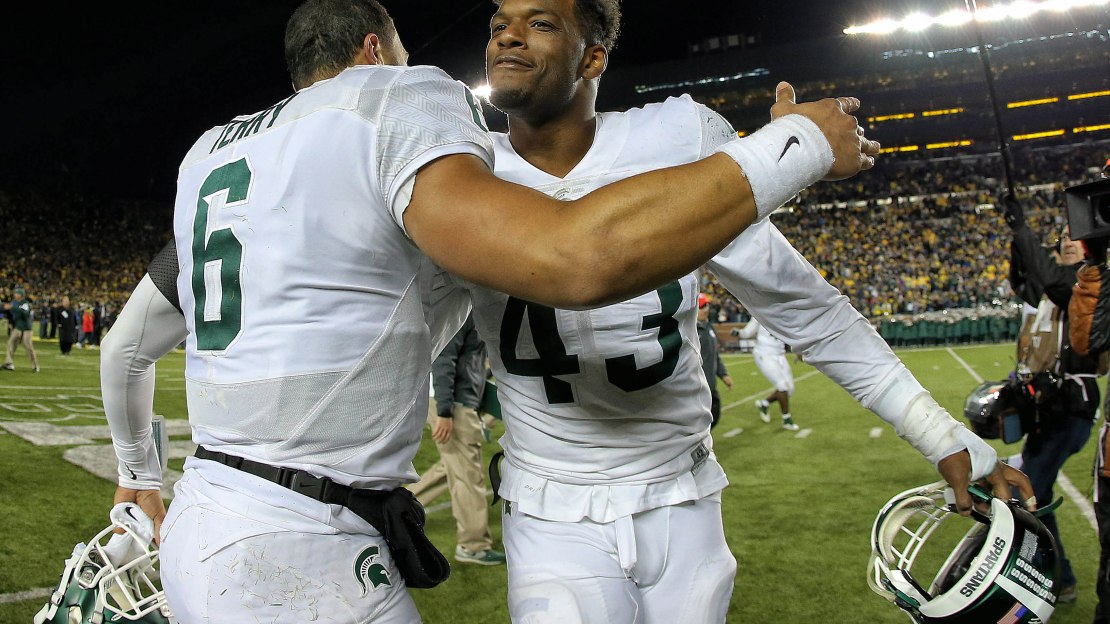 Deep breath ? exhale. OK, let?s begin taking a look at one of the crazier Big Ten Saturdays we have seen in years.

Biggest surprise: It wasn?t a shock to see Nebraska win at Minnesota. But it was a shock to see the Huskers win with such ease, taking a 48-25 decision. The Gophers were giving up just 19.0 points and 306.2 yards per game but allowed 464 to Nebraska. This was a victory Nebraska needed after opening 0-2 in the Big Ten and suffering four gut-punch losses this season. Minnesota? It?s still searching for answers in a season that just can?t get on track.

Biggest disappointment: Northwestern. The wheels have officially come off. Two weeks, two humiliating losses for the Wildcats. Last week, NU fell 38-0 at Michigan. That was followed by Saturday?s 40-10 smackdown vs. a beat-up Iowa squad in Evanston. This followed a 5-0 start that had optimism high at Northwestern. Now, the Wildcats? hopes of competing for the West title are fading.

Play this again: Two good choices: Michigan State?s insane 27-23 win at Michigan or Rutgers? zany 55-52 comeback victory at Indiana? Let?s go with the Spartans? memorable victory, with a you-can?t-believe-it ending that will be played thousands of times in years to come. The finish/game was so great and so stunning, it tops the Scarlet Knights' comeback that featured 28 unanswered points to win on a field goal as time expired.

Never play this again: Wisconsin totally dominated Purdue, even though the final was just 24-7. The Badgers outgained the Boilermakers, 418-191. Wisconsin led, 10-7, at half and shut out Purdue the rest of the way. It was the Badgers? 10th win in a row vs. the Boilers.

Best play: Michigan may not think it?s the ?best,? but it certainly won?t soon be forgotten. With 10 seconds left in the game, Wolverine punter Blake O?Neill bobbled a low snap, was hit and lost the ball. It was scooped up by the Spartans? Jalen Watts-Jackson, who ran it back 38 yards for the game winning TD with no time left on the clock in a stunning 27-23 MSU triumph.

De'Mornay Pierson-El is a highlight machine for @Huskers, and here's the latest example. http://t.co/TkQGKxcKxh

Did you see this? Former Michigan State running back knows all about exciting walk-off scoring plays. After all, Bell scored the game-winning touchdown as time expired in Pittsburgh's victory over San Diego on Monday Night Football. Five days later, he thoroughly enjoyed another walk-off winner, this one by his alma mater.

.@OhioStAthletics fan or not, tough not to appreciate this fantastic Joey Bosa @USATsportsImage photo. pic.twitter.com/OM6JY74l1w

Michigan State. The Spartans are living the dream, scooting to 7-0 after a miraculous win at Michigan. Don?t expect any more help from the football gods this year, Michigan State.

Your thoughts on that wild, stunning, you name the adjective, finish, @MSU_Football coach @DantonioMark? http://t.co/siqVA1MeMv

Iowa. With each passing week, this looks like a potentially special season. The Hawkeyes took a banged-up squad to Evanston and banged around the Wildcats, 40-10. Iowa has two road wins over ranked teams for the first time since 2002.

Wisconsin. These may not be the ground-pounding Badgers we have come to love, but play some serious defense and are still winning. A methodical 24-7 win vs. Purdue keeps Wisconsin in the West chase, as Joel Stave has passed for over 300 yards in consecutive games after UW had just 96 yards rushing (2.6 ypc) vs. Purdue.

Nebraska. The Cornhuskers ended a two-game losing skid that had seen them fall on the opponent?s final offensive play with a resounding 48-25 win at Minnesota. Nebraska needed this ? badly.

Rutgers. Welcome back, Kyle Flood! He led his team to a 25-point comeback at Indiana, stealing a 55-52 win after Kyle Federico nailed a 26-yard field goal as time expired after having two PATs blocked earlier in the game. Three fourth-quarter IU turnovers doomed the Hoosiers. RU pulled off a 25-point rally last year vs. Maryland.

Northwestern. The party is over in Evanston after a 5-0 start. The last two weeks, NU has been outscored 78-10. The once impenetrable NU defense has been scorched the last two weeks. Iowa had 492 yards and 294 on the ground, one week after Michigan tallied 380 and 201, respectively. NU RB Justin Jackson has rushed 22 times for 55 yards the last two weeks after running for 536 yards with four 100-yard games the first five games.

Michigan. GUH!!! Victory was swept away in one botched punt attempt in the final seconds. Will this kill the Harbaugh mojo that had seen the Wolverines win five in a row? Doubtful. But this one will sting for a long time. Sparty still rules ?Big Brother.?

Indiana. Those bowl hopes that seemed almost like a sure thing after a 4-0 start now may be wavering following a 55-52 home loss to Rutgers. IU has lost three in a row. Now may be a good time to start panicking.

Chris Laviano, QB, Rutgers. He completed 28-of-42 passes for 386 yards with three TDs and a pick at Indiana.

Akrum Wadley, RB, Iowa. After Jordan Canzeri went out with an ankle injury, Wadley came on to rush 26 times for 204 yards and a school record-tying four TDs. Not bad for a third-stringer. Wadley had eight carries on the season entering the game.

Joey Bosa, DE, Ohio State. The defensive end registered seven tackles, including three tackles for loss, and one sack in the Buckeyes' win vs. Penn State.

TJ Edwards, LB, Wisconsin. He tallied a game-high 16 tackles, including 1.5 tackles for loss, to go along with a forced fumble, vs. Purdue.

Joel Stave, QB, Wisconsin. He is carrying this offense, hitting 30-of-39 passes for 332 yard vs. Purdue. Last week, Stave completed 24-of-50 attempts for 322 yards. The last Badger QB with consecutive 300-yards passing performances? Russell Wilson in 2011.

Saquon Barkley, RB, Penn State. In his first game back after missing two tilts with injury, the freshman ran 26 times for 194 yard vs. Ohio State.

You could call this the cherry on top. Joshua Kalu returns late INT for @Huskers TD. Brought to you by @hotelsdotcom http://t.co/g7NDMQxMAL

7, wins for MSU over Michigan in the last eight games in the series.

6, INTs for Iowa?s Desmond King, which leads the Big Ten. He had one at Northwestern.

25, yards in the fourth quarter for IU.

200, yards in the fourth quarter for Rutgers.

10, wins in a row for Wisconsin over Purdue.

301, yards passing for Minnesota?s Mitch Leidner, who completed 26-of-40 passes with a TD and two picks. His completions and yards were career highs.

191, yards for Purdue at Wisconsin, a season low. The Boilermakers have scored just two TDs while the game was still up for grabs the last two weeks (a second TD vs. Minnesota came late in mop-up time).

6.2, points Wisconsin is surrendering per game in its five wins, following 24-7 win vs. Purdue.