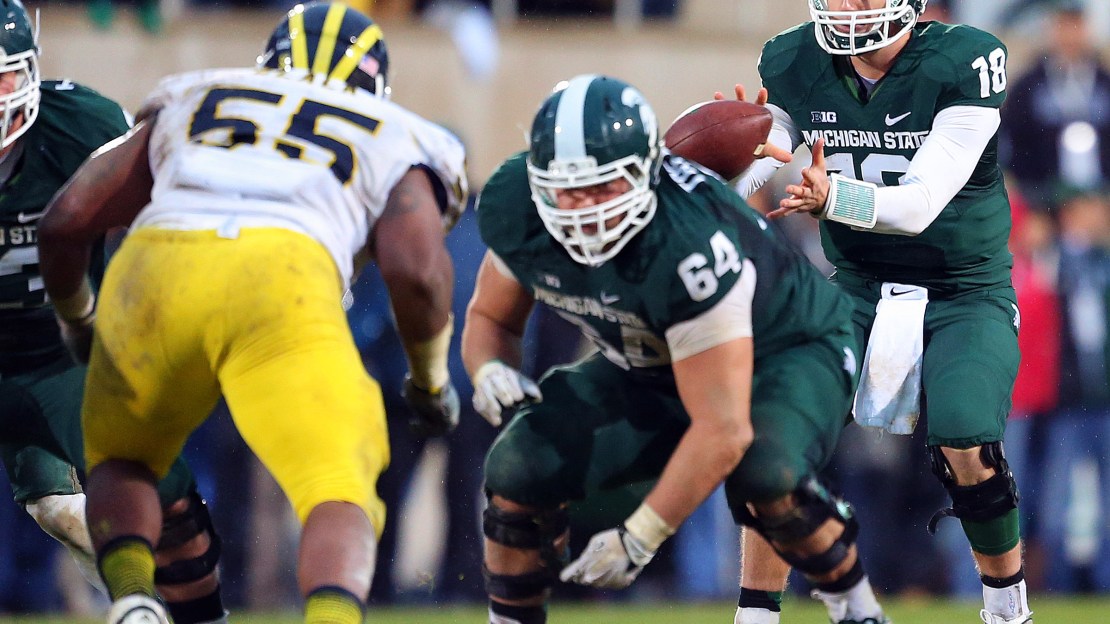 It?s Friday, which means we are one day from the Titanic Michigan State at Michigan game. My pick? Michigan State. And here are three reasons why Mlive.com agrees with me.

No. 1 on Mike Griffith?s list: Quarterback play. I, too, think senior Connor Cook is the X-factor in this game. His talent and senior savvy will prove beneficial for MSU. He is 29-3 as a starter and has been in many big games. Jake Rudock? His resume pales.

So who do you have in this game and all of the others? Our picks are here – we let you vote for yours, too.

Pennlive.com has some storylines and numbers for this Saturday?s Penn State at Ohio State game. Could the Nittany Lions pull off the upset?

A big key for the Nittany Lions will be their offense. Coordinator John Donovan needs to get his ground game in gear as he tries to ignore critics.

"We've produced enough to win five games in a row," Donovan said. "If we can do that again this weekend, we'll be happy."

It's a unit that ranks 103rd out of 127 FBS schools in total offense, and both the run and the pass statistics rank bottom third in the nation. The red zone offense has been good, checking in at No. 25, and penalties and turnovers are both down since a Week 1 loss to Temple. But those are the only statistical positives to date.

Count Urban Meyer among those who is not surprised by Jim Harbaugh?s quick success. Well, I am a bit surprised. 5-1? In a dominating fashion?

"We certainly know what they're doing now, they have a good football team," Meyer said Thursday during his radio show on 97.1 The Fan.

If Indiana wants to beat visiting Rutgers and stay on track for a bowl, it must cut down on the penalties. This may be a must-win for IU; RU, too.

Yes, the Wisconsin rushing attack has been floundering, ranking 11th in the Big Ten (164.3 ypg). What in the name of Ron Dayne is going on? Regardless, the staff won?t give up on the running game. Good idea. Quick prediction: UW will get well on Saturday and rush for over 300 yards vs. a visiting Purdue defense that ranks last in the Big Ten vs. the run (215.2 ypg).

"I think you do a good job of watching, do a good job of seeing where you aren't successful," said Joe Rudolph, UW's offensive coordinator/line coach.
"Sometimes there are a lot of reasons for it. You didn't feel like anything you were asking the group to do or calling that you were off with. You just didn't get it (done) across the board.

"So you come back to it and you kind of tweak a couple things, you talk on the sideline."

Shavon Shields? An NBA player? Nebraska coach Tim Miles thinks his forward could do it.

The guy is pretty good, ninth in the conference in scoring last season (15.4), 14th in rebounding (6.0) and fifth in free-throw shooting (82.7 percent). Still, he wasn?t on the 10-man preseason all-Big Ten squad, Omaha.com notes.

?Last year, he suffered from the 3-point line (19.5 percent), but who on our team didn?t? He?s a guy who needs to make more than one a game at a good rate to get into the NBA conversation. But I think he can do that.?

If there is a hoop team that?s being overlooked in the Big Ten, it may be Iowa. The Hawkeyes have four starters back. And, this is a confident bunch. Oh, well. Preseason hype means nothing.

"It seems to happen every year," said senior Adam Woodbury. "Every year we're getting better and every year we're under the radar. We're accepting of that and totally fine with that underdog role. We'll see where it lands."

HawkCentral.com says all the Hawkeyes have done in the past three seasons is win games — 67 to be precise. Iowa has made three consecutive postseason appearances, climbing the ladder each step of the way. The program advanced to the NIT Championship game in 2013 before making back-to-back NCAA Tournament appearances.

A big storyline at Big Ten media day yesterday: The future of Wisconsin?s Bo Ryan, who says he won?t rule out returning beyond this season.

"He said he doesn't know," Bronson Koenig said, recalling a conversation he had with Ryan during the summer after UW announced in late June that Ryan planned to coach one more season. "It could be this year. It could be a few more years. But Coach Ryan likes it so that nobody really knows what he is doing."

NJ.com has photos of the 50 coolest celebrities that Eric LeGrand has met since his injury. LeGrand is one of the nicest people you?ll ever meet.