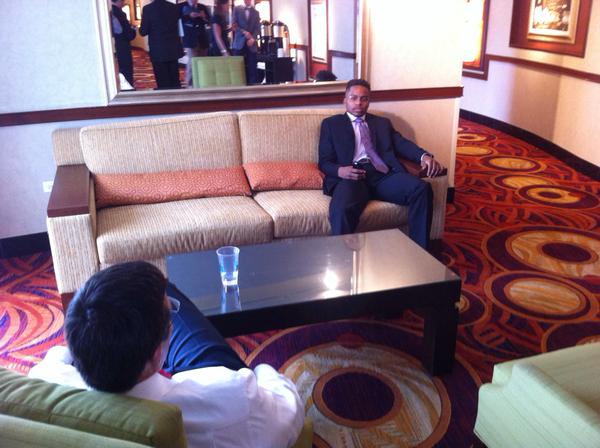 Big Ten media day is in the books, and now it's time to share some of the highlights I witnessed Thursday at the Marriott O'Hare.

Ferrell was sitting on a couch, minding his business and checking his phone, when Miles spotted him and took a seat in a nearby chair.

"I remember seeing you play, I think, as a freshman in Indianapolis. Park Tudor, right?" Miles recounted.

"I was the coach at Colorado State at the time, but after the game I told you, 'You remind me of Isiah Thomas.' Little did I know I'd be playing against you every year!"

The conversation went on for a few minutes, as the two talked about Ferrell's Park Tudor days, his teammates and opponents.

Miles went on to tell Ferrell: "You were the best kid I saw."

.@CoachMiles talks to Yogi Ferrell about watching him as a freshman in high school. "You were the best kid I saw." pic.twitter.com/Jq9ZU6ULp9

LOOK OUT FOR CRASH DAVIS! Rapheal Davis is the epitome of Purdue basketball. All hustle, all of the time, that's Davis.

The reigning Big Ten Defensive Player of the Year's hustle is evident every time he takes the floor, but it sure seems like he saves his best for the Big Ten tourney.

In each of the last two events, Davis has crashed into press row to save a loose ball. Two seasons ago, it was vs. Ohio State; this past season, his going vertical, and knocking down a table in the process, helped the Boilermakers fend off upset-minded Penn State.

"It might just be my Big Ten-tournament-diving-into-the-crowd thing," Davis said.

Should we expect more of the same March 9-13 at Bankers Life Fieldhouse in Indianapolis?

"Hopefully I'm not in that (position), hopefully we're winning by 10 or 12 (points), so I won't have to risk my neck," Davis said with a laugh. "But I probably will, I'll dive for it no matter how many were up."

Of course, he will. It's that effort and desire that helped make him the Big Ten's elite defender, a guy who can guard pretty much any opponent's top player.

A LITTLE HELP HERE? Few things are more difficult than tying a bow tie. Seriously, have you ever tried it? If you haven't, save yourself the trouble and go with the clip-on variety.

.@umichbball G Spike Albrecht getting some help with his bow tie. pic.twitter.com/UZPn131VMC

RETURN TO THE REC: Shep Garner was a senior in high school the last time Penn State played at Rec Hall, but the sophomore guard knows how special the place is.

Garner attended the 2013 game vs. Princeton at Rec Hall, the basketball team's home up until the 1996-97 season, and he can't wait to experience the atmosphere twice this year.

"Rec Hall is a crazy, crazy environment," he said. "If we played every game there, we'd definitely have the best environment, best atmosphere in the Big Ten."

Garner and Penn State host Canisius and Louisiana-Monroe on December 10 and 12, respectively, at Rec Hall.

VITTO'S VOICE: Wisconsin's national semifinal win over then-undefeated and No. 1 Kentucky was special for every Badgers player. It's a night Wisconsin Vitto Brown will never forget.

Prior to the game, Brown, along with one student from the three other Final Four schools, sang the National Anthem.

"Oh man, it was awesome," Brown said. "It was just unbelievable. One of the best experiences of my life."

"Nah, I don't get nervous anymore," he said. "Plus, there were too many people there; it was like one big mass of people."

Brown is no stranger to singing in public. He's performed the National Anthem at Wisconsin games before, one time with his family, and he's never afraid to show off his voice (example 1; example 2).

Brown's mom, the best singer in a family full of singers, told him at a young age that he "could hit a note," and he's made her look smart.

As much as Brown enjoys singing, he's focused on basketball and helping Wisconsin make a third consecutive Final Four.

"Right now, basketball is in the foreground," he said. "Singing will always be there."

WATCH YOUR HEAD! The ceilings at the Marriott O'Hare were not built with basketball players in mind. I saw Iowa's Adam Woodbury and Northwestern's Alex Olah both duck to get through the low doorways. Even the normal hallways were a close call, too.

BEST PLAYER, AND BEST DRESSED: Not only is Maryland point guard Melo Trimble the Big Ten preseason player of the year, but he's got some serious style. Countless reporters asked him about the fashion statement he made Thursday.

Melo Trimble's attire continues to be a popular topic. pic.twitter.com/Z5dyveGdiN

Several schools are still doing it, and you can see all of the 2015-16 Big Ten media guides that were on display at media day Thursday below: