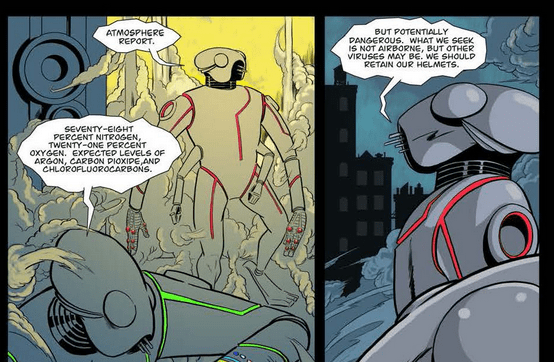 An alien baby born on a dying planet is sent to Earth to be raised in safety and, as he grows up, discovers he's able to do several amazing things that human beings can't. After an experiment gone wrong, a scientist learns he can transform into an incredibly strong but unstable monster. A boy who sees his mother and father murdered in front of him during a robbery later finds solace and inspiration in a dreaded nocturnal animal.

The stories above resonate with generation after generation. They weren't necessarily meant to last, since comic books are by definition cheap, flimsy serials. But Bob Hall, an MFA student at the University of Nebraska, believes those same qualities are the reason for the medium's longevity.

"There's something about comics on a page that can take you to places where nothing else can take you. It doesn't have to be as realistic as a movie," he said. "It's drawn, but it leaves your imagination to make it real, rather than filling in all the blanks for you. Even if there's a superhero featured, the best comics somehow include you in it and you're going on this journey."

As a writer and illustrator working on the "World of Viruses" comic-book project at the University of Nebraska, Hall hopes to take the minds of middle school students to new places as they learn about infectious particles. University educators conceived the comic as a fun and engaging way to teach young people about a topic that could easily be too dry and technical for an audience in the 6th-8th grade age range.

[btn-post-package]"We can take you into the 'microverse,'" Hall said. "In the [comic] I'm doing, the viruses become personified. We created characters for the viruses. If a virus could talk, what would that virus want to say about its existence and its history, about the things it's done in the past? [It's] just very exciting to creatively figure out how to make the story open those gateways."

And in the process of creating the comic book, Hall got quite the education as well.

"I know a heck of a lot more about measles than I did three months ago," he said.

Play the one-minute video above to explore the University of Nebraska's "World of Viruses."