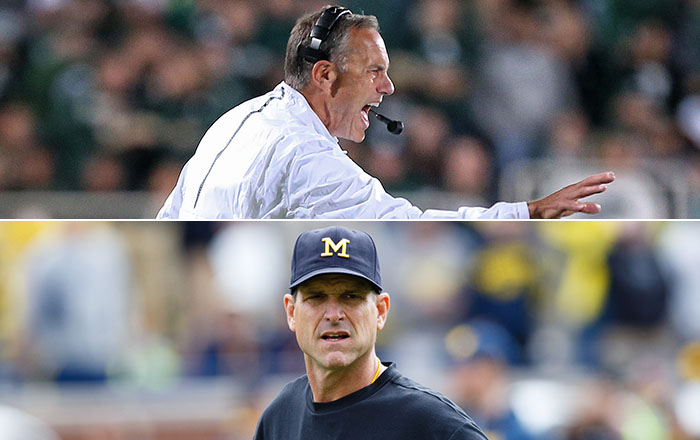 An interesting week is headlined by Michigan State?s visit to Michigan in one of the biggest meetings ever between these intense rivals. Iowa can make another big statement that it?s the best team in the Big Ten West by winning at Northwestern, too.

Other things to watch Saturday: Will Nebraska?s luck finally turn at Minnesota? Rutgers goes to Indiana with each team badly in need of a win to keep bowl hopes afloat. Penn State puts its five-game winning streak on the line at Ohio State, while Wisconsin looks to continue its joy and extend Purdue's misery.

Here are my Week 7 game previews:

The Badgers are coming off a huge last-second win at Nebraska that kept them in the West race. Wisconsin won the game on the arm of QB Joel Stave and not because of the running game. It?s a formula that the Badgers haven?t used much the last 25 years, but it worked for them in Lincoln. They threw it 16 more times than they ran it. It was the first time in school history that Wisconsin won a game in which it threw the ball at least 50 times. The Badgers have dominated this series of late, winning nine in a row-the last eight by double-digits. Purdue hasn?t beat Bucky since 2003, a 26-23 win in Madison. To say the Boilermakers are struggling would be a vast understatement. Last week?s 41-13 home loss to a struggling Minnesota was demoralizing and the low point of a Darrell Hazell regime that isn?t gaining traction. Purdue is 1-17 in Big Ten games under Hazell with 13 of those losses coming by double digits. Football is about blocking and tackling. And the Boilers can do neither well. If that wasn?t bad enough, Purdue?s 17 turnovers are the third most in the nation. Will this team win another game?

A clash between arguably the best teams in the West. Who am I kidding? These are the best teams in the West. It also is a battle that will pit two outstanding running backs in Iowa?s Jordan Canzeri vs. Northwestern?s Justin Jackson. Canzeri is coming off a 256-yard effort vs. Illinois and is No. 3 in the Big Ten in rushing (116.2 ypg). Jackson is No. 4 (110.2 ypg) but was stymied at Michigan with just 25 yards. The Hawkeyes are rolling, one of three Big Ten unbeatens. If they can escape Evanston with a victory, the Hawks have a shot to finish unbeaten. Really. Iowa has won two straight games against Northwestern, including a 48-7 blowout last year in Iowa City. The Hawkeyes are trying to win three straight games against the Wildcats for the first time since 2000-02. But know this: Iowa has lost two straight games in Evanston, last winning in 2007. Northwestern is trying to bounce back from a 38-0 drubbing at Michigan. Before getting trucked in Ann Arbor, the Wildcats had allowed just 35 points in their first five games. The NU offense is pedestrian, ranking 13th in the Big Ten in scoring (21.2 ppg). Can the Wildcats tally enough points against a good defense like Iowa?s to win? NU redshirt freshman QB Clayton Thorson lacks the skill set of Iowa junior signal-caller C.J. Beathard, giving the Hawkeyes a big edge under center-and in this contest.

Got to like undefeated @HawkeyeFootball's chances in the #B1G West. pic.twitter.com/HrhD4o7PXY

This may be a must-win for both teams. The Hoosiers have dropped two in a row after that 4-0 start. They need two wins in their last six games to make their first bowl game since 2007. Rutgers, Maryland and Purdue are still on the schedule. If they win two out of those three, IU will go bowling. Rutgers needs this game if it wants to make a bowl. The Scarlet Knights are 2-3 and still have games against Ohio State, Michigan, and Wisconsin. IU needs a healthy Nate Sudfeld and Jordan Howard in the backfield. They missed the Penn State game and left the Ohio State game early. The Indiana defense still gives up yards, but it forces a lot of turnovers. The Hoosiers are plus-nine in turnover margin, which is tied for the fifth-best ratio nationally. The Scarlet Knights got a huge boost last week from the return of suspended WR Leonte Carroo. He was outstanding vs. Michigan State with seven catches for 134 yards and three touchdowns. This week, Kyle Flood is back from his three-game suspension. The Scarlet Knights have a good stable of running backs that they will need to use to win games and complement a passing game that struggles to stretch the field consistently.

Mark Dantonio?s hoody and glare vs. Jim Harbaugh?s blue ?M? hat and bifocals. Let?s do it! It?s finally time to renew one of the most intense rivalries in the nation. This battle of unbeatens drips with deliciousness. Michigan State has won six of the last seven games against Michigan, with the only loss coming in 2012 in Ann Arbor. And that just happens to be the last time the teams played at the Big House. And it also is the last time MSU has lost a Big Ten road game, as it has won its last 11 since. More juiciness: This is the first time these teams are meeting when both are in the Top 15 since 2003. The play of the Wolverine defense has been off the hook. Michigan has shut out its last three opponents, making the Wolverines the first FBS team in 20 years to pull off the goose egg hat trick since Kansas State in 1995. Michigan is the last Big Ten team to pull off the feat, doing so in 1980. The Spartans are wracked with injuries, especially on the offensive line. That is worrisome facing this Wolverine defense. Michigan State is 6-0 but it hasn?t been easy. The Spartans needed a last-minute touchdown to win at Rutgers. Still, Michigan State has won 19 of its last 20 Big Ten games.

The Golden Gophers will welcome a desperate Cornhuskers squad that has perfected the art of the gut-wrenching defeat. All four of the Huskers? losses have come on foe's final offensive play. And the four setbacks have been by a combined 11 points. As a result, Nebraska is 2-4 for the first time since 1959. Making a bowl may be a long shot. The Gophers may need to win this one with a brutal schedule remaining (Michigan, Ohio State, Iowa, Wisconsin). They have won the last two meetings with Nebraska and are coming off a breakout effort in a 41-13 win at Purdue. It was the first time the Gophers scored more than 30 points in 2015. Look for Minnesota to run a lot after gashing Purdue for 326 yards on the ground with freshman sensation Shannon Brooks ambling for 176 yards. The Gophers have run for 552 yards combined against Nebraska the last two meetings. Good news for the Cornhuskers? leaky pass defense: Minnesota?s feeble passing attack will pose no threat. Neither quarterback will arrive on Saturday with a glowing resume. Nebraska?s Tommy Armstrong is especially struggling. He completed just 21-of-59 passes for 234 yards with a touchdown pass and an interception in losses at Illinois and vs. Wisconsin. Minnesota?s Mitch Leidner was pulled at Northwestern as he continues to struggle with accuracy. However, he is coming off an 8-of-12 effort with two TDs at Purdue ? but for just 59 yards.

So, so close. A look at @HuskerFBNation's four heartbreaking losses. pic.twitter.com/BjeKT3p5Cz

The Nittany Lions will arrive in the Horseshoe with plenty of mojo, riding a five-game winning streak coming off what was a five-game home stand. QB Christian Hackenberg is playing some of his best football of late. He is responsible for eight touchdowns over his last three games and has not thrown an interception. The Nittany Lions sorely need ?Hack? playing well because they have had struggles in the run game the last two weeks with running backs Saquon Barkley and Akeel Lynch out. The PSU defense is excelling. San Diego State is the only team to score more than 20 points in the last five games, and one of those touchdowns came on a kickoff return. More good news for Penn State: The Buckeyes haven?t played as well defensively lately. They were a Top 10 defense nationally through September. But they have allowed 55 points in the last two games against Indiana and Maryland, including a season-high 28 points vs. the Terps. Still, beating the Buckeyes will be a tall task for PSU. Ohio State has won 19 straight games, the longest active streak in the nation. The Buckeyes are also 26-0 in Big Ten regular-season games under Urban Meyer. The team may have found a workable situation for its QBs last week. Cardale Jones started and ran the team but gave way in the red zone to J.T. Barrett, who ran for 62 yards and three TDs. But, when all else fails, the signal-callers can spin around and hand the ball to RB Ezekiel Elliott. He?s run for at least 100 yards in each game this season and for 11 straight dating back to last season. The Heisman hopeful has 16 career 100-yard rushing games, which is tied for the fifth-most in school history.

Got to love @coachjfranklin's answer to @BTNRickPizzo's question about idea of possible coaching time limitations. http://t.co/8GSPKDRsV9