2014 Ohio State Football team: Where are they now? 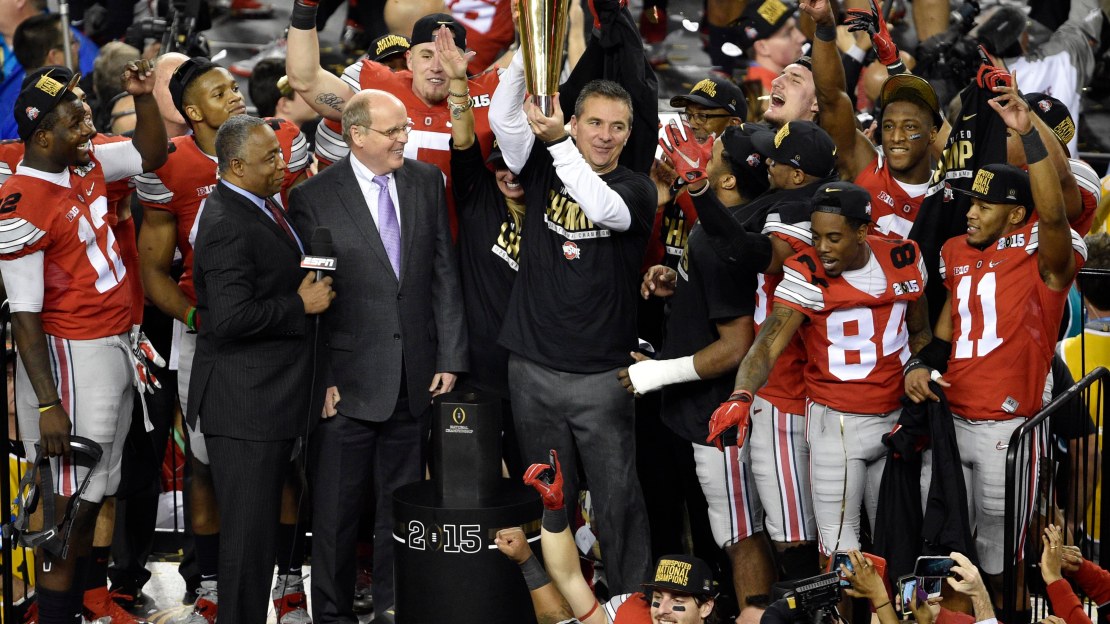 Ohio State's 2014 football season will be remembered as one of the greatest in Big Ten history.

The show goes inside the Buckeyes 2014-15 regular season and sensational three-game postseason run with interviews from players, coaches and media members.

In honor of the upcoming show, we took a look back at some of the standout seniors and coaches from the Buckeyes' national championship team and where they are now.

Devin Smith, WR: During his time at Ohio State, Smith developed into one of the top deep threats in school history. He finished his career with 121 catches for 2,503 yards and 30 touchdowns. During the Buckeyes' incredible playoff run (Big Ten Title game, Sugar Bowl, National Championship), Smith had seven catches for 269 yards and four touchdowns. He was selected in the second round with the 37th pick in 2015 NFL Draft by the New York Jets. He has recorded five catches 53 yards in two games this season.

Jeff Heuerman, TE: This guy enjoyed a memorable four-year career at Ohio State, totaling 52 catches for 792 yards and seven scores. He was named Second Team All-Big-Ten as a senior while helping the lead the Buckeyes to a national title. Heuerman was selected in the third round of the 2015 NFL Draft by the Denver Broncos. Heuerman tore his ACL in rookie camp and was ruled out for the 2015 season. He is expected to make a full recovery and be ready for the start of the 2016 NFL season.

Doran Grant, DB: Grant was a two-year starter at Ohio State and played a major role in the Buckeyes' run to the 2014 national championship. Known as a speedy cornerback with good ball skills, Grant totaled 140 tackles and four interceptions during his four-year college career. He was drafted in the fourth round of the 2015 NFL Draft by the Pittsburgh Steelers. He is currently a member of the Steelers' practice squad.

Michael Bennett, DT: A dominant defensive tackle for the Buckeyes, Bennett enjoyed a standout career at Ohio State. In four years, he posted 110 tackles and 18 sacks, while forcing seven fumbles from his defensive tackle spot. Bennett was selected in the sixth round of the 2015 NFL Draft by the Jacksonville Jaguars. He has recorded three tackles in five NFL games this year.

Evan Spencer, WR: One of the leaders of the Buckeyes' 2014 title team, Spencer was a consistent playmaker in OSU's receiving game. In four years, he totaled 52 catches for 579 yards and seven touchdowns. Spencer was selected in the sixth round of the 2015 NFL Draft by the Washington Redskins. He was waived by Washington, but then landed in Tampa with the Buccaneers where he is a current member of their practice squad.

Curtis Grant, LB: One of the top-ranked linebacker prospects in the nation out of high school, Grant enjoyed a four-year career at Ohio State that saw him record 132 tackles, three sacks, two fumble recoveries and a pick. He went undrafted in the 2015 NFL Draft, but signed a free agent deal with the San Diego Chargers soon there after. He was released by San Diego before the start of the season.

Tom Herman, Offensive Coordinator: Herman was the mastermind behind Ohio State's outstanding offensive attack. After three years serving as the Buckeyes' offensive coordinator, Herman left to take the head coaching job at the University of Houston. Under Herman, the Cougars are currently 5-0 and stand atop the American West standings.