BTN LiveBIG: Wisconsin artist is up to something fishy 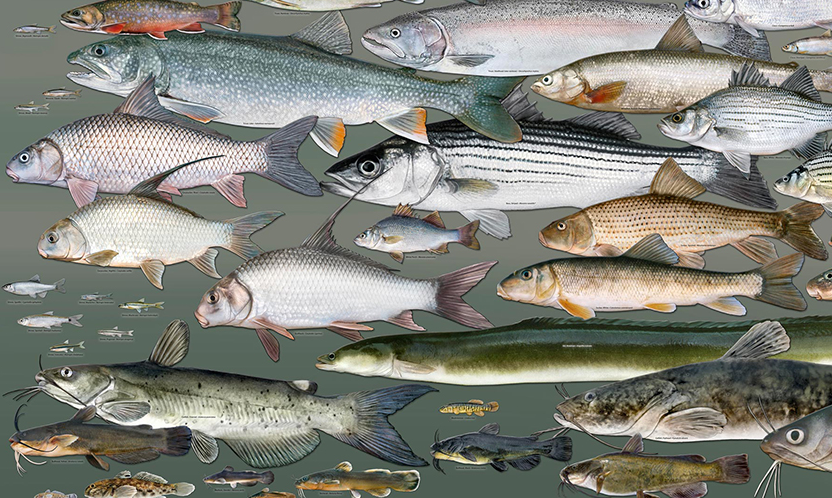 Kandis Elliot has devoted her career to making science more beautiful - and accessible. As emerita senior artist at the University of Wisconsin?s Department of Botany, she spent decades illustrating plants and animals to educate and delight the public.

But her latest project may be her most ambitious. Elliot created a series of life-size posters of all of the 183 fish species found in Wisconsin?s lakes, rivers and streams. And she predicted big things for this project.

As you might imagine, it isn?t easy to find good visual representations of that many species of fish. While reliable, high-quality photographs, illustrations and mounted displays prepared by taxidermists are plentiful for some of them, many others are harder to come by.

Elliot worked off photos for the most part. But where some rare and extinct species were concerned, she had to bring fish out of museum jars - not always whole - and make them look lifelike.

?I call it ?resurrection of the dead,?? she said of the process. ?And some of them are franken-fish. Some had really good pictures of a head, and then another picture of a tail, and then a couple more are close-ups of fins. I had to put them all together and make it look like one nice big fish.?

Such is her devotion to art, which she?s had a passion for since she was young.

?I was always one of these kids who could draw ? does all the prom decorations, doesn?t go the prom, kind of geeky sort of thing,? she explained.

However, Elliot?s high school guidance counselor discouraged her from pursuing her artistic interests in college. Thankfully, she didn?t listen to that advice, and her love of nature led her to earn a zoology degree from Wisconsin.

Elliot soon realized she wouldn?t have a conventional career in that area, though.

?I found out that studying zoology isn?t really Golden Nature Guide-ish, it?s killing a lot of animals, and guts, and formaldehyde and all that stuff,? she said. ?So I thought, ?What the heck do I like to do? Well, I can draw.??

She then earned a commercial art degree from a local tech school. Eventually, the botany artist position at Wisconsin opened up, and that led to a 22-year stint for Elliot. Government cutbacks forced a decrease in the program, which is how she ended up in her current position as artist emerita. Still, she yearned to continue drawing, and she later landed a similar role with the university?s Zoology Museum.

?The trouble is, that kind of work is what I do,? she said. ?I couldn?t go home and just watch television.?

Elliot created the fish posters to similarly inspire today?s youth to appreciate the beauty and diversity of the natural world. Moreover, she?s already moved on to her next project: a similarly comprehensive series on Wisconsin?s clams.

What?s driving this creative surge? Simply put, Elliot?s concerned that children today are too detached from the natural world. She sees this as one way to encourage them to learn about and appreciate the beauty and diversity they can find in nature.

?They don?t know the basic plants and animals, the common things that they walk past every day,? Elliot said. ?The birds they see in the trees ? they couldn?t name one or two of them.

[btn-post-package]?If we give [these posters] to kids and get this thing into schools, it will show them that there?s more to these animals than Bluegills and game fish.?