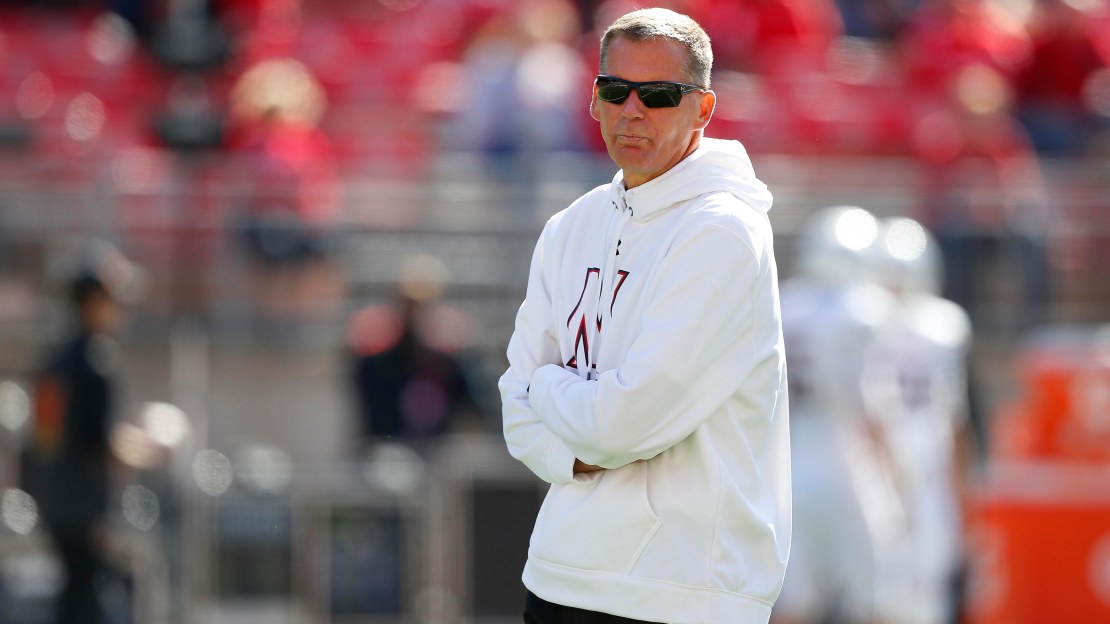 Maryland has seen enough from Randy Edsall, who was fired today.

The move had been widely speculated for days, as the Terrapins have struggled mightily in Edsall?s fifth season in College Park, Maryland. After going 7-6 last season with a trip to the Foster Farms Bowl, Maryland is 2-4 and sinking fast as it struggles on both sides of the ball.

Edsall, 57, never got the program over the top after taking over for Ralph Friedgen in 2011. Edsall arrived following a successful 12-year run at UConn capped by a Fiesta Bowl bid in 2010. But he was 22-34 at Maryland with a 10-24 conference mark and two bowls.

"We appreciate Randy?s tireless commitment to the University of Maryland,? Maryland AD Kevin Anderson said in a release. ?This was a difficult decision, but ultimately this is the best course of action for our football program moving forward.?

Offensive coordinator Mike Locksley has been named the interim coach for the remainder of the season. Watch his opening statement. Maryland, which has an open week Saturday, next plays Oct. 24 vs. Penn State.

Edsall produced two winning seasons at Maryland, going 7-6 in 2013 and in 2014, Maryland?s first in the Big Ten that produced a 4-4 league mark with wins at Michigan and at Penn State. However, things started going sideways at the end of last season. The Terps started 4-1 but proceeded to go 3-5 the rest of the way. A meltdown in a regular-season ending 41-38 loss at home to Rutgers was the nadir, as Maryland frittered a 35-10 second quarter lead and subsequently got whipped by Stanford in a bowl game.

After 2014, Edsall altered his staff, switching defensive coordinators and schemes (from a 3-4 to a 4-3). But, it didn?t produce results. And the offense bogged down with horrible quarterback play and a lack of explosive playmakers. The season was circling the drain before it was halfway over, which hastened Edsall?s departure.

Edsall did lots of good at Maryland, shoring up the academic achievements while running a program that largely avoided off-field issues while operating under the NCAA rules. But Edsall was unable to make Maryland matter from a wins and losses standpoint, as the team tuned him out. There were reports of a players-only meeting not long ago that Edsall had no idea about.

The Big Ten East is an uber-competitive division with Jim Harbaugh at Michigan; Urban Meyer at Ohio State; James Franklin at Penn State; Mark Dantonio at Michigan State. Was Edsall the guy capable of doing battle on the field and in recruiting with that foursome? Maryland felt he wasn?t.

Maryland is a program with lots of untapped potential. It sits in a fertile recruiting territory and is developing an indoor practice facility. Plus, it has the backing of Under Armour founder and Maryland alum Kevin Plank. The school?s vision: To become the Oregon of the East.

The Terps already have an array of outlandish uniforms. Now, they need the type of explosive talent that has made Oregon a national brand and program. It will be the job of the next coach to build toward that goal. Expect a big, splashy hire with the next coach having an offensive background. The next leader of the Terrapins must ?move the needle? if Maryland truly wants to battle the big boys of the Big Ten.