BTN LiveBIG: Indiana lecturer gives kids around the world a place to play 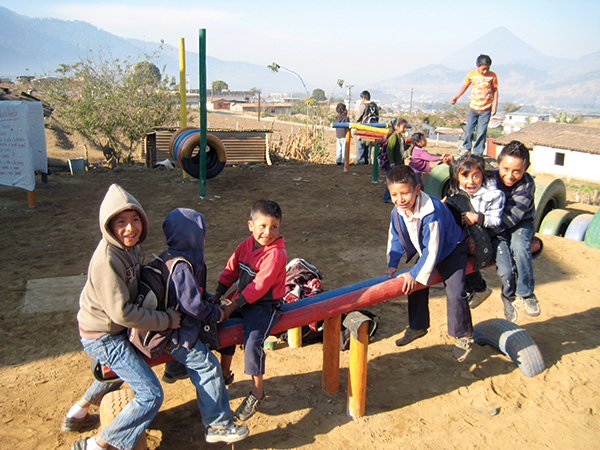 A stressful career running his own architecture firm in Boston left Indiana University lecturer Jon Racek in need of a recharge. Frustrated, he headed to Thailand for six months and discovered, by accident, his new passion: playgrounds.

Today, Racek is founder and executive director of Play360, an organization that not only helps build playgrounds in underdeveloped countries, but also teaches people how to make and maintain them using readily available materials.

?Play360 uses design to empower communities to improve their own lives,? he said of the organization, which was inspired by a chance encounter with someone building playgrounds for Thailand?s Burmese migrants.

In his eyes, playgrounds bring people together. That?s why he?s dedicated his time to building them in underdeveloped parts of the world. But Play360?s mission also produces unique challenges from time to time, which require some creative thinking.

?We did a project ? in Kibera [a section of Nairobi, capital city of Kenya], which is one of the biggest slums in Africa,? he explained. ?Incredibly dense, it basically has the footprint of Central Park, but there?s a million people living in that little footprint. The only place where we could build was on top of a school. So we put the playground on the roof of this one-story school.?

Racek?s goal is to not only build these playgrounds, but also ensure they serve the communities they?re in for years to come. Consequently, he uses a very simple measurement for Play360?s success.

[btn-post-package]?The greatest metric, in my mind, of how effective we?ve been is the community keeping the playground together,? Racek said. ?Are they repairing it when it breaks? Are they adding onto it? If we go back to a location and the playground is broken, that means it hasn?t been valuable to them.?

With playgrounds thriving in 10 different countries on three continents, it?s safe to say people care about the opportunity Play360 is providing, both to kids and the community at large.