Debate it: Will the Big Ten have an unbeaten team? 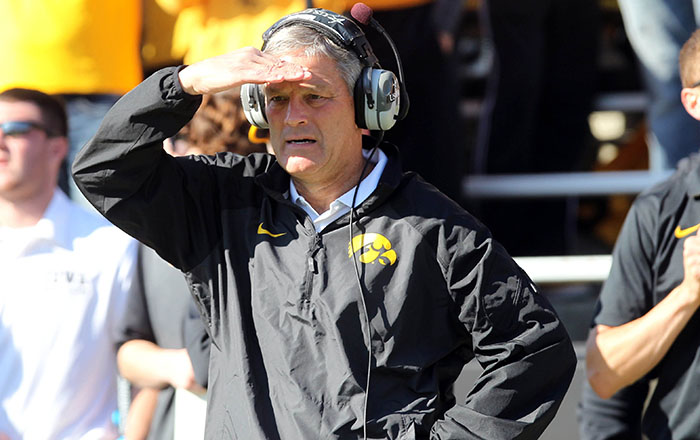 There are four remaining unbeaten teams in the Big Ten heading into Week 6 of the college football season: Iowa, Northwestern, Michigan State and Ohio State.

All four teams are 5-0, and all four are ranked in both the AP and Coaches Poll.

How long will that last?

No. 13-ranked Northwestern faces a stiff test this weekend in a matchup with No. 18 Michigan at noon ET on BTN/BTN2Go.

Iowa plays host to Illinois (4-1) on Saturday, while Ohio State hosts Maryland (2-3) and Michigan State will travel to Rutgers (2-2).

BTN.com Senior Writer Tom Dienhart and Web Editor Sean Merriman debate the following question: Will the Big Ten have an unbeaten team at the end of the regular season?

Submit your vote in the poll on this page.

Will the Big Ten have an unbeaten team at the end of the regular season?

Dienhart: No. I don?t think any Big Ten will finish unbeaten ? not Ohio State, not Michigan State, not Northwestern, not Iowa. While the Hawkeyes may have the ?easiest? remaining slate, I think the Buckeyes are best-equipped to go 12-0. The monster 1-2 punch to end the season vs. Michigan State (Nov. 21) and at Michigan (Nov. 28) will be formidable for OSU. But by late-November, Ohio State may be playing better on the offensive side of the ball and have its quarterback situation settled. Still, I think the Buckeyes will stumble in one of those two final tilts. Michigan State has three challenging road contests left: at Michigan (Oct. 17); at Nebraska (Nov. 7); at Ohio State (Nov. 21). It won?t survive that gauntlet. As for NU and Iowa ? they play in Evanston (Oct. 17), so one will get hung with an ?L.? And the Wildcats could fall this Saturday at Michigan. Iowa finishes at Nebraska (Nov. 27). Bottom line: I don?t think either the Wildcats or the Hawkeyes have the mettle to run the table.

Merriman: Yes. I was extremely confident heading into this season that winner of that Nov. 21 showdown between Michigan State and Ohio State will go undefeated and represent the Big Ten in this year's College Football Playoff. Well, while neither team has played even close to their best football yet, I'm sticking to my original statement. I have always been a believer in the fact that great teams rise up to the challenge when called upon, and I truly believe both of these teams are elite. The Spartans have been hit by the injury bug, while the Buckeyes have yet to figure out a way to get their playmakers consistently involved in the offense. By the time Nov. 21 rolls around, I believe MSU will be getting healthy (Conklin, Williamson, Kieler) and OSU will have figured out a way to get the ball in the hands of Braxton Miller, Jalin Marshall and Curtis Samuel on a more consistent basis. That game will decide the Big Ten East, and while road games against Michigan will be challenging, I'm convinced both MSU and OSU will win those games. As for Iowa and Northwestern, as you noted, the two clubs play each other next week, which will obviously give one of them a loss. The Hawkeyes still have to play at Indiana and Nebraska, while Northwestern has to play at Nebraska and at Wisconsin. That's no easy task. With that said, I'm still saying the winner of Michigan State and Ohio State will finish the season undefeated. Boom!