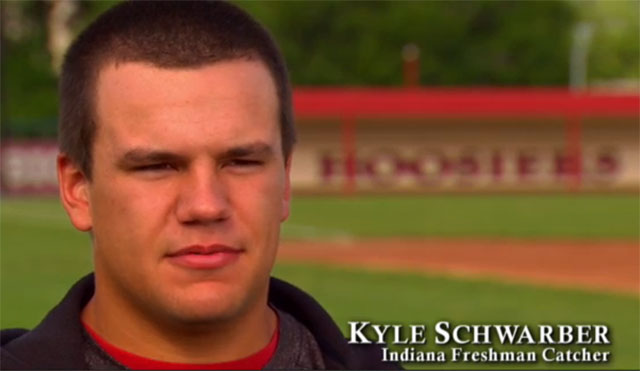 Chicago Cubs rookie Kyle Schwarber made quite a splash on Wednesday night when he crushed a two-run home run into the river during Chicago's 4-0 wildcard win over Pittsburgh. He also had an RBI single, and it all brought back memories of Schwarber's career at Indiana, where he starred at the plate and behind it. In 2012 BTN featured Schwarber and teammate Sam Travis, then known as the latest version of the "Bash Brothers."

"I'm going to crush the ball," Schwarber told us then about his approach to hitting. "And that's all you can really think when you're up there."

Selected in the first round of the 2014 MLB Draft (fourth overall) by the Chicago Cubs after his junior year, he is the highest draft pick in Indiana baseball history. At Indiana, he ranks fifth in slugging percentage (.607), sixth in home runs (40), eighth in hits (238) and tied for eighth in triples (12) and runs (182), He was All-Big Ten honors all three years and batted .341 in 180 games played.

Here's his homer from the wildcard game.