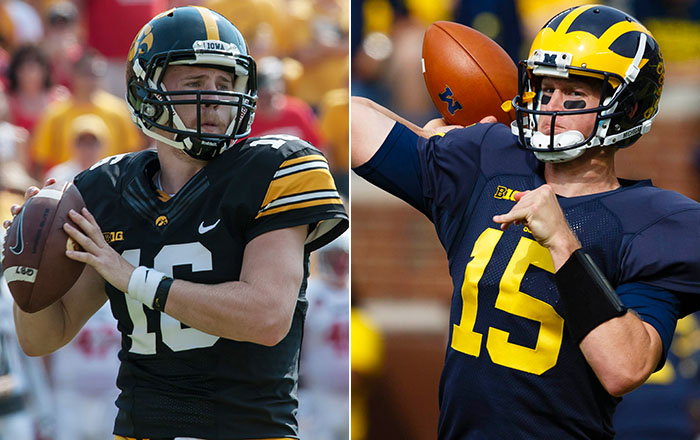 Time to sift through my inbox for some good emails to answer. And, from the look of things, some people like me … but many don't. And, that's OK! Onto the mail room!!!

How about C.J. Beathard vs. Jake Rudock in the Big Ten championship game? Michigan has to be the clear favorite in the East right now. The West may be decided in two weeks when Iowa meets Northwestern. Two strong defenses, but Iowa has advantage offensively. I give Iowa the edge in West for now. – Mark

How wild would that be to have the former Hawkeye QB Rudock battle his former team in the Big Ten title game? I would love it! A great storyline! While I agree Iowa may win the West, I?m not sure if Michigan will be able to overtake both Ohio State and Michigan State. But the Wolverines certainly are playing better than both right now! I can?t wait for the MSU at Michigan game on Oct. 17! Then, OSU at Michigan on Nov. 28!

I would really like to see you make more than one little comment about the Hawkeyes in just one of your columns. Iowa had Wisconsin QB Joel Stave on the run. Get rid of your Hawkeye bias, will you? They are not going anywhere. – John

I gave the Hawkeyes love! I talked about the Hawkeyes in my STOCK UP section in Tom?s Take on Saturday night.

The play of the defense at Wisconsin was outstanding. Getting four turnovers helped vs. the Badgers, who saw Stave fumble on the Iowa 1-yard line. Just killer! I can?t wait to see how the Hawkeyes keep developing. The visit from Illinois this week will be interesting. And by the way: I picked Iowa to win the West last year. How did that work out?

I love Michigan State but am a bit concerned. What do the Spartans need to do? – Lloyd Wooster

MSU has been giving up a lot of big plays on defense. It got burned for a 60-plus yard TD run by Purdue. And the Spartan defense is just No. 9 in the Big Ten (376.8 ypg). And it may help the offense if the offense can settle on one running back. Now, several players still are taking turns. Is there a No. 1 back? The team also isn?t playing well in the second half. Graham Couch of the Lansing State Journal notes recently that MSU is averaging 4.8 points in the third quarter, 10 points total in the second half, while allowing 6.2 and 14.6 points, respectively. Never before in Mark Dantonio?s tenure has the third-quarter margin been a negative. And, until now, only in 2009 have the Spartans allowed more points than they?ve scored in the second half of games.

I'm an Ohio State grad and a die-hard Buckeye. I trust Urban Meyer, but could you please tell me why J.T. Barrett isn't the starting quarterback? I don't understand what is going on. – David Wiley

Neither Cardale Jones nor Barrett has looked great. Jones has completed 59 percent of his attempts for 867 yards with five TDs and five interceptions with 127 yards rushing. Barrett has hit 55 percent of his passes for 193 yards with two TDs and two picks with 64 yards rushing. But, like you, I would go with Barrett. I think he is a better all-around signal-caller. That said, Jones received almost all of the snaps in the non-conference finale vs. Western Michigan and was under center for all of the Big Ten opener at Indiana. Luckily, Ezekiel Elliott busted loose for scoring runs of 55, 65 and 75 yards in the second half last week, or else the Buckeyes may be 0-1 in Big Ten play.

Ohio State and Michigan State's defenses looked "human" on Saturday, while Iowa, Michigan and Northwestern looked like world beaters. Who has the best defense in the Big Ten? – Willie Brazell

Do you think Michigan will beat Northwestern Wildcats next Saturday in Ann Arbor? – Ben

You have to like the chances for the Wolverines, who are every bit as hot as Northwestern. Michigan?s next two foes (NU and Michigan State) are a combined 10-0. The Wildcats? next two opponents (Michigan and Iowa) are 9-1. Defense and running the ball have been bellwethers for both programs in 2015. It may come down to which QB can make the most plays. And, I give the Wolverines an edge there with Jake Rudock because of his experience over NU redshirt freshman Clayton Thorson.

How many points will be scored Saturday afternoon on @BigTenNetwork? pic.twitter.com/uc0R25yJcH

After watching MSU for five games, how can anyone see the Spartans as a legitimate contender for the playoffs? They have one of the top quarterbacks in the nation, and they play conservative by running when they have a lead. It is so frustrating. This is not going to win you games against teams like Michigan and Ohio State, do you agree? – Steve

No doubt, Michigan State has left something to be desired. Yes, the Spartans are 5-0. But the squad doesn?t seem to be clicking just yet. Perhaps the staff is sitting on some plays in its playbook. But also know this: the offensive line has been banged up. As for a defense that seems to lack the edge it had in recent years, too many big plays are being yielded. And injuries also have been an issue for this unit, too. I still have faith in the Spartans rounding into form. And they have the senior QB in Connor Cook you mentioned who is a cut above any other signal-caller in the league. That will give MSU a big edge. I agree with you: use him more in the passing game.

I think Nebraska has the best chance to slip off the bowl radar than any Big Ten team currently projected for the postseason by Jerry Palm of CBSSports.com. Look at the Huskers? schedule.

No doubt, a case could be made for the Cornhuskers sliding out of the bowl picture. NU is 2-3 and has tough games left vs. Wisconsin; at Minnesota; vs. Northwestern; vs. Michigan State; vs. Iowa. Who knows? Even trips to Purdue and Rutgers could be tough. Ugh. It could be a close call to six wins.