Nation’s best teams will be playing on BTN this Saturday 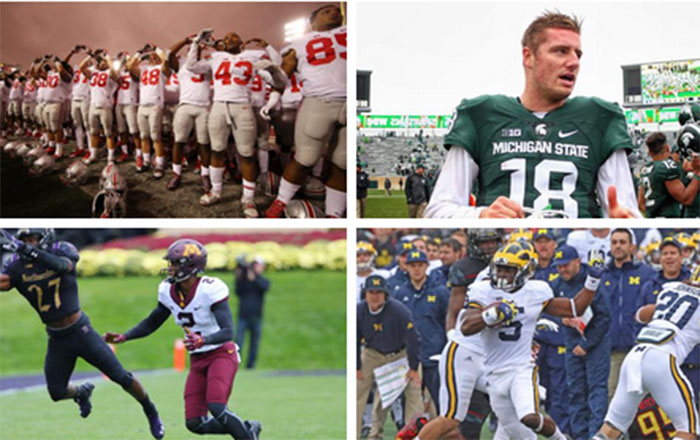 For the first time in network history, two top five teams in the AP Poll will call BTN home, as top-ranked Ohio State takes on Maryland at noon ET, followed by No. 13 Northwestern at No. 18 Michigan and No. 4 Michigan State facing Rutgers at 8 p.m. ET.

No. 1 Ohio State will host Maryland on the heels of a thrilling 34-27 win at Indiana. Ezekiel Elliot had three second-half touchdown runs and extended the Buckeyes Big Ten regular-season winning streak to 25. Ohio State has now topped the AP Poll for 101 weeks, tying Oklahoma?s record for the most all time. Eric Collins will call the game, with Glen Mason accompanying him in the booth and Rick Pizzo on the sideline. Watch Maryland at Ohio State on BTN2Go.

Northwestern and Michigan square off in a top-20 matchup with a pair of the Big Ten?s best defensive units. The Wildcats are coming off of a shutout win against Minnesota, and have only allowed three touchdowns in five games this season. The Wolverines also blanked their opponent this week in a 28-0 win over Maryland, making it back-to-back shutouts for their defense. Northwestern?s ranking in the AP Poll is its highest since 2000, while Michigan jumped to their highest ranking since September of 2013. Kevin Kugler will handle the play-by-play duties for the game, with Matt Millen providing analysis and Lisa Byington reporting from the sideline. Watch Northwestern at Michigan on BTN2Go.

Michigan State travels to Rutgers this weekend with a new career leader in wins. With a 24-21 win over Purdue, Connor Cook ran his record as a starting quarterback to 28-3, and broke Kirk Cousins record of 27 wins as a Spartan. Michigan State has also now had a 100-yard rusher in every conference game since October of 2013. Cory Provus will call the play-by-play alongside Chuck Long in the booth and J Leman will report from the sideline. Watch Michigan State at Rutgers on BTN2Go.

All the games can also be streamed via the web, smartphones, tablets and connected devices on BTN2Go, BTN?s digital extension.