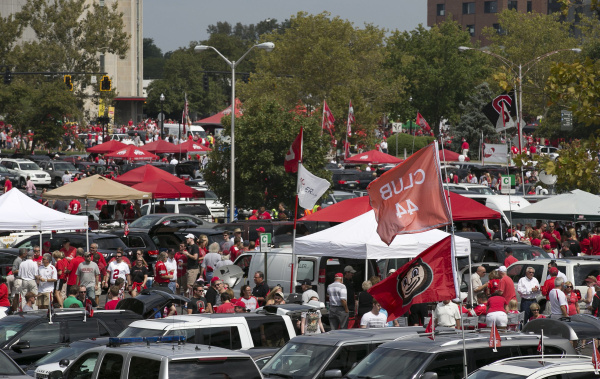 Students at The Ohio State University are flocking to a course that requires them to get "grilled" on the finer points of preparing mouth-watering steaks, pork loin and whole chickens on open fires. Just in time for tailgating season!

Called "Bar-B-Q Science," the class mixes elements of culinary science and nutrition as it dishes out many lessons on the joys of cooking. And there's also a public-health component to the course too.

"The idea is that ultimately there is a whole science behind meat and producing quality and reliably safe meat," Bar-B-Q Science co-instructor Michael Cressman said. "We thought we should create a culinary class to cook meat correctly."

Held twice a year, the two-credit Bar-B-Q Science course tends to fill up quickly, according to Cressman, an assistant professor of animal sciences who has taught the class since it was rolled out in Fall 2012.

"There's usually a wait list," Cressman said. "It's held the first seven weeks of fall and the last seven weeks in the spring. We try to offer it when the weather is best."

Typically, 30 students take Bar-B-Q Science, which is co-taught by Michael Chakerian, a grilling aficionado who works in information technology at OSU. A third instructor is guest lecturer Kevin Kolman, a grillmaster for Weber Grills, the well-known manufacturer based in Palatine, Ill.

"What's cool is the science of how you eat animals," Kolman said. "And through this class, you leave with a high level of knowledge of grilling and life skills."

Kolman's company donated 12 grills for the course - six charcoal and six gas. These serve as the "desks" on which Ohio State students learn fundamental and advanced cooking techniques. Neophyte chefs who don't know the difference between a brisket and a biscuit soon learn there's more to grilling than getting the fire started.

"The kids really don't know about barbecue and grilling, so we don't have to retrain them," Kolman said. "The kids are pretty much coming in with limited grilling knowledge and they learn fast. It's more molding them than re-developing them."

The course is required for undergraduates majoring in meat science, but students studying other subjects can still get their grill on at OSU.

"A lot of the kids are engineers, business kids, majors from all over the university," Cressman said. "The kids don't know how to cook, use a knife, trim a muscle, roll it back up and do food prep."

The course involves a 55-minute lecture on Tuesdays, and a three-hours-plus session on Thursdays, when the week's cooking "game plan" is put into effect. On any given Thursday, students might prepare stuffed leg of lamb, beer-can chicken, whole strip loin, pizza or baked desserts.

To finish the course at the end of the seven weeks, students are given the opportunity to grill their meat of choice, according to Cressman.

"We always have them grill vegetables [too], and they have to grill that in groups and present it to a panel of critics - someone from Weber and [others from] local restaurants," he explained. "They will grill a meat and a side dish and ? get feedback, then grill a dessert and get a grade."

With all of the food being consumed during the Bar-B-Q Science class, should students worry about gaining a few pounds over those seven weeks? Not at all, Cressman said.

[btn-post-package]"It's a protein-heavy diet, so that doesn't necessarily mean high-calorie," he said. "They only eat with us on Thursdays, so they don't have to go home and eat dinner. They all grill something different, and when they're done, they take a break and there's a group serving."

Kolman, who has 45 grills in his backyard, said preparing healthy food is a staple of the Bar-B-Q Science class, which prides itself on teaching students the proper way to trim the fat.

"People who want to eat healthier have to get good meat, chicken or pork," Kolman said. "You don't need a lot of sauce if you're cooking the right way. Vegetables, chicken, beef and good stuff that's raised the right way means you end up using less condiments. They don't have to douse sauce on it because it tastes really good."