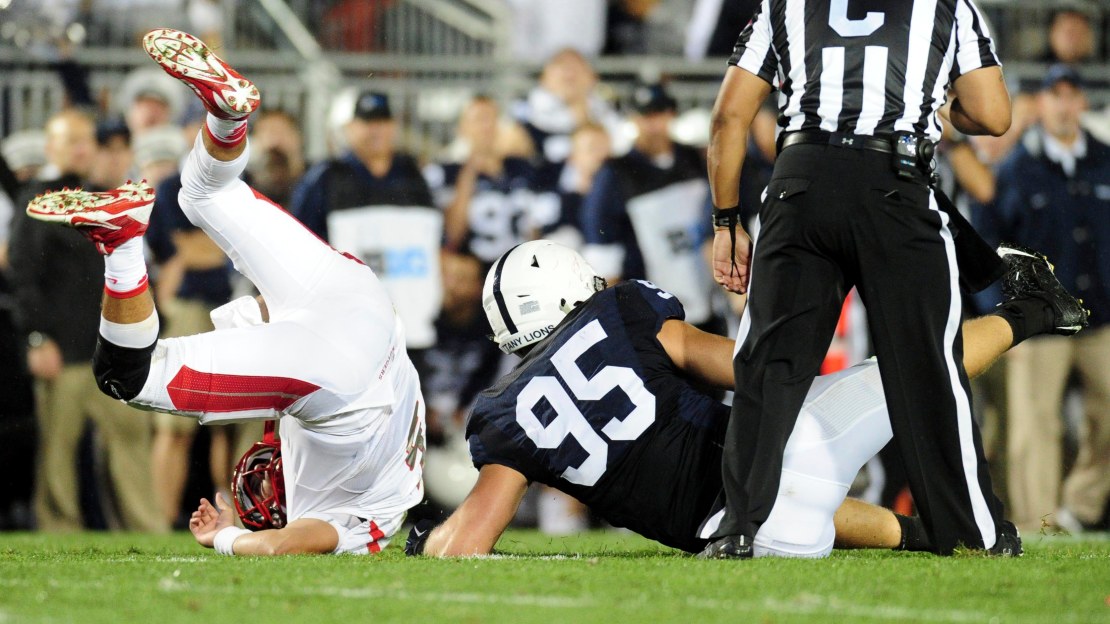 The injuries on the Michigan State offensive line are mounting. And, it?s not a good thing, says Mike Griffith of Mlive.com.

When the Spartans line up vs. Purdue, they will be missing two starters. That hasn?t happened since a 7-6 season in 2012. Tackles Jack Conklin, a flat-out stud, and Kodi Kieler will be MIA. Sophomore Dennis Finley will man left tackle with Conklin out. Donavon Clark is the right tackle with Benny McGown at right guard, typically Clark?s spot. O-line coach Mark Staten will have these guys ready. Trust me.

I had a reader remind me this week that before the season, I said Penn State probably would have to manufacture a pass rush with some stud DEs gone. Well, that hasn?t been the case so far in 2015. And you can thank DE Carl Nassib.

"He's one of those guys who could come out of nowhere and have the type of year that could be all-Big Ten caliber. We feel like he has NFL potential."

The Nittany Lions have won three in a row. Carry on.

After sitting on the BYU offense last week, how much better can Michigan?s defense play for coordinator D.J. Durkin? Through four weeks, Michigan currently sits with the No. 2-ranked defense nationally, as the Wolverines have allowed just 203.8 yards per game this season.

Mlive.com says the Wolverines' put together their most impressive performance of the young season, holding BYU to only 105 yards of total offense in a 31-0 shutout. I was stunned at the dominance. BYU hadn?t been shutout in over a decade.

"People can get caught up in statistics and obviously there were some good stats coming out of that last game, and the last couple, but we can make a lot of improvement," Durkin said on Jim Harbaugh's radio show. "Can you improve on a shutout? Well, no. That's the best you can do points-wise. But individually, by group and by team, we feel like we can play a lot better.

"And that's the whole key. Every week, you've got to improve. And I feel like we've done that thus far."

This unit will keep UM in most every game.

Speaking of Michigan, it will travel to Maryland to play the nation?s top punt return man in Will Likely ? and face the nation?s worst QBs.

How bad have the Terps? passers been? They have combined for 12 turnovers-worst in FBS–and are hitting just 50 percent of their passes. How will Maryland score on Michigan?

Cleveland.com has a weekly mock College Football Playoff. And this week, it looks thusly: No. 1 Ohio State vs. No. 4 Michigan State; No. 2 Ole Miss vs. No. UCLA. Not bad. No argument from me.

Have you seen the Nebraska defense this season? Not pretty. How to improve. Get back to fundamentals.

The fourth-quarter meltdown last week vs. Southern Miss was disconcerting-especially vs. the pass. Nebraska gave up 21 points and 10.4 yards per play (all through the air) during the final 15 minutes of Saturday?s 36-28 win over Southern Miss.

?I won?t say this went all the way that way, but it looks like it?s falling apart,? Mike Riley said. ?I watch the film and go, ?What are we doing here????

Nebraska can count on continuing to get attacked through the air until it shows it can stop it. At this point, I think the Huskers are who they are on defense. It?s difficult to get much better in-season.

The Champaign News-Gazette reports that current Illini players are in touch with ex-coach Tim Beckman.

?Beck called me the other day,? V?Angelo Bentley said. ?Just the fact he?s not back there in practice with us when we?re catching punts and little things like that is noticeable. After you cope with him leaving and you get all your focus on however you may be feeling, it?s just back to work and getting better every day.?

How about this: Steve Politi of NJ.com says a booster is trying to bully Rutgers into keeping Kyle Flood. And RU can?t let it happen.

So add this to the list of problems in Piscataway. Politi says the booster thinks the size of his bank account not only makes him official spokesman for the well-heeled football supporters who watch games from the Audi Club suites, but enables him to make decisions for the athletic department.
The stories from Rutgers never are boring.

Lots of good stuff coming from 4-0 Indiana these days. This isn?t so good: starting defensive lineman Darius Latham has been suspended indefinitely.

Pete DiPrimio of the Fort Wayne News-Sentinel says this is the latest in a series of recent issues involving football and basketball players that had IU President Michael McRobbie telling coaches and other athletic department personnel, in no uncertain terms, that he was tired of reading about bad-behaving athletes.