Nate Sudfeld: 'I think this is the most balanced team I’ve been on' 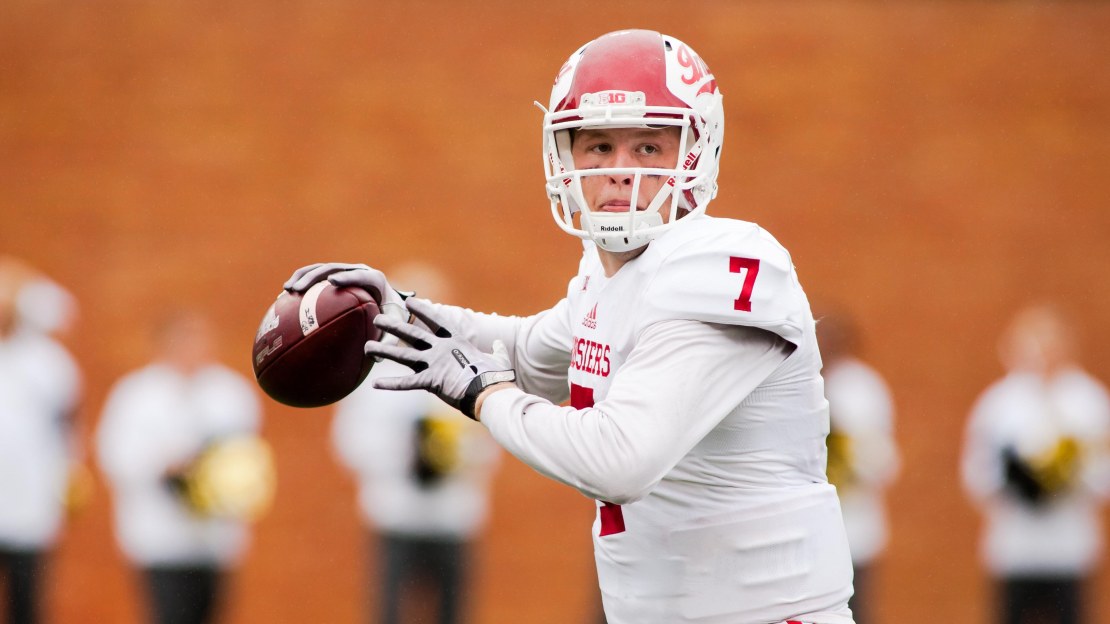 The Big Ten is filled with some surprising storylines. And one of the best is Indiana, which is off to a 4-0 start for the first time since 1990 as it aims for the program?s first bowl since 2007 and just its second since 1993.

Indiana has won five in a row dating to last season, a first since 1987. The Hoosiers are trying to start 5-0 and have a six-game win streak for the first time since 1967. But to reach 5-0 will take a Herculaneum effort, as No. 1 Ohio State comes to Bloomington this Saturday.

Indiana quarterback Nate Sudfeld is unmoved by history. He likes his team. He believes in his team. And, he?s one of the Big Ten?s top signal-callers. In 2015, the senior is No. 2 in the Big Ten in passing (285.8 ypg), hitting 61.1 percent of his attempts for 1,143 yards with seven touchdowns and just one pick.

I caught up with Sudfeld as he prepped for one of the biggest games at Indiana?s Memorial Stadium in years.

Q: Are you surprised to be 4-0?
A: I?m really not. I am very pleased with where we are and think we have a high ceiling. It is good to see we can win some close games. But I think we can play better than we have.

Q: Indiana trailed in the second half of its first three games yet still won. What do you attribute to rallying and winning close games?
A: It?s a tribute to the leadership on the team. Coach (Kevin) Wilson has conditioned us to be tough. And the disappointments of years past have made us a tough-minded team. I think the senior leadership on this team has held guys to a standard and to be accountable. And we have pushed each other to be the best. So far, it has been pretty good.

Q: How has your receiving corps been coming together? That was an area of concern before the season began.
A: They are doing great, but there?s still a lot of improvement we can make. But I am pleased with how they are running their routes, making competitive plays, getting confident. The biggest thing for this corps has been getting confidence. And it has come week by week.

Q: Who have been the standouts?
A: My top three guys all have done well and we need more from them–Simmie Cobbs, Ricky Jones and Mitchell Paige have been consistent and good. They need to elevate their game to another level.

Q: What has UAB transfer RB Jordan Howard meant to the offense? He leads the nation in rushing with 675 yards.
A: We were fortunate to pick him up. He?s an unbelievable kid and player. He is one of the best things that could have happened to our team. The way he plays, he really opens up our offense. He never goes backward. He won?t go for 60 or 70 yards, but he will get third-and-short and keep you in manageable situations. He is a workhouse.

Q: How is he different from Tevin Coleman?
A: Tevin was a guy who could rip off 70- 80-yard runs. Jordan could as well, but not with the speed of Coleman. But as far as an every-down back and moving the chains and carrying 30 times a game, he can handle that.

Q: How have you gotten better?
A: I think I have gotten better in my timing and trusting what I see, throwing it on time. I don?t think I?m making too many dumb mistakes. I have had a few this season, but I think I?m taking care of the ball and managing the game well, keeping the tempo going and leading the guys. But there is a whole element of my game I have yet to put on the field. I hope to show it.

Q: What would it mean to get this program to a bowl?
A: Ultimately, that?s not our goal. We have said that for a long time. We feel we have a high ceiling. Just saying we are a bowl team isn?t reaching the potential we feel we have. Going to a bowl would be awesome, but we are working for more than that and to go to a higher level.