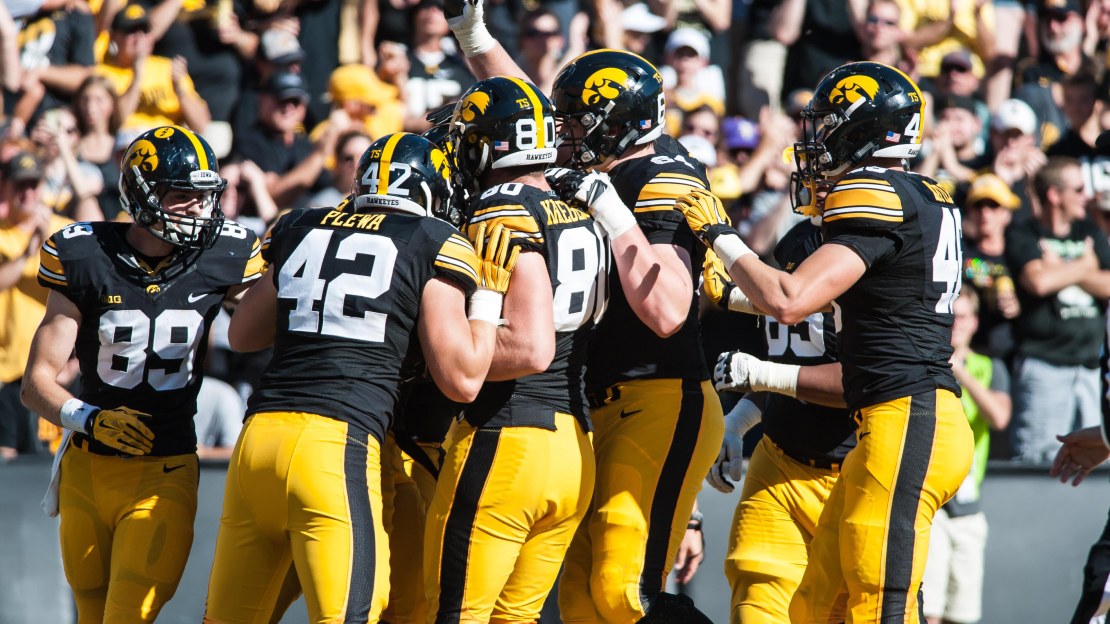 You send me emails. I answer emails-if they are good ones. Pretty simple. So, let?s enjoy another round of Big Ten Mailbag, the best part of every week. As a bonus: There even is a Vinnie Barbarino reference in this week?s bag ?o? mail. How lucky are you?

Why is it that Iowa doesn't get any respect when it comes to getting rated in the polls? I know the Hawkeyes haven't played anyone other than Pitt. – Mike

True, the Hawkeyes? resume doesn?t glisten with victories over FCS Illinois State, Iowa State, Pitt and North Texas. Not exactly a murder?s row. That has something to do with Iowa?s absence from the polls. And the fact little was expected from the Hawkeyes entering the season-beginning way off everyone?s radar-it will take a big win to grab the attention of pollsters. But, being ranked means nothing. So, don?t stress. If Iowa keeps winning-beginning with Saturday at Wisconsin-the Hawkeyes will get plenty of publicity.

Michigan? Please. They beat a BYU team that had severe jet lag and had been home once in the last month. Jim Harbaugh is a good coach, but before he is designated as the next human to walk on water, is there a chance you could spend a bit more time on teams that are actually ranked at the top of college football? – Dave

You mean Ohio State? I understand. The hype around Michigan is growing ? and growing ? and growing. And just think: The Wolverines are just seven points from being unbeaten. How nutso would the Michigan/Harbaugh hype be if the Wolverines were 4-0? Exactly. We?d all be starring in a commercial for cotton Dockers. The Michigan schedule has been solid so far: lost at Utah, beat Oregon State, UNLV and No. 22 BYU at home. The last three games, the Wolverines have won by an aggregate 94-14. C?mon, that?s pretty impressive and worthy of attention. Michigan will get a chance to really impress when Michigan State comes to Ann Arbor on Oct. 17. And when Ohio State comes to the Big House on Nov. 28.

Does the fact that Utah destroyed Oregon cause questions about how strong Michigan State actually is? – Mac

I think it has to be a consideration. The Utes won, 62-20, at No. 13 Oregon, although Ducks starting QB Vernon Adams left with an injury. It was an unreal result and has to take some luster off of the Spartans? 31-28 win vs. the Ducks in Week 2. Some, myself included, hailed the MSU victory over Oregon as one of the most defining in program history! Well, hindsight may view the win differently, as this doesn?t appear to be an elite Oregon club without Heisman QB Marcus Mariota.

Nebraska is only going to win two more games this season, Illinois and Purdue. Are you buying or selling this prediction? – Mike McClure

Selling. Only two more wins this season for the 2-2 Cornhuskers? Really? No doubt, Nebraska will win at Illinois this Saturday and at Purdue on Halloween. But the Huskers should win at Rutgers on Nov. 14. And Nebraska has a shot to win at Minnesota, vs. Northwestern and vs. Iowa. I still like this Huskers squad.

Assuming Indiana catches Ohio State napping when it visits Bloomington this Saturday, does this put a possible appearance in the Top 25 on the horizon for this Hoosiers team? I believe the Iowa and Michigan State games are the toughest games on IU?s schedule, because of the way those teams match up against them. –  Todd Shawyer

Without a doubt, Indiana will be ranked next week if it beats Ohio State. But, that?s a gargantuan ?if.? IU is 12-71-5 all-time vs. the Buckeyes. The last 22 games, the Hoosiers are 0-21-1 vs. OSU. Indiana?s last win vs. Ohio State was when it won two in a row in 1987-88. Before those triumphs, IU hadn?t beaten the Buckeyes since 1951, going 0-31-1 against OSU. I don?t see how the matchups with Iowa and Michigan State will be any tougher than the one vs. Ohio State.

Does Michigan have enough depth to seriously challenge MSU or OSU? – Mike

The Wolverines lack the depth to keep pace with Michigan State and Ohio State. Michigan also lacks top-end quarterback play. Sorry, Jake Rudock. He is a game-manager who needs the offense to run well in order to be successful. Rudock can?t throw more than 30-35 passes if the Wolverines want to win most games. Still, if things go well, it wouldn?t be a shock if Michigan dumped either the Spartans or Buckeyes.

Have you always been this stupid, or just lately? – Don Lechman

It just started happening when I lost my hair around 2010.

Who will Ohio State play in one of the semis, and then who will they play in the national title game? – John Daugherty

Hmmmm. It?s still early, but let me take a crack at this. How about Ohio State vs. Michigan State in the Orange Bowl. And then the Buckeyes will battle LSU for the national title in Arizona.

Could Michigan cause problems for Michigan State this year when they play on Oct. 17 in Ann Arbor? – Bobby

To quote Vinnie Barbarino: Is the Pope Catholic? Does a bear sleep in the woods?