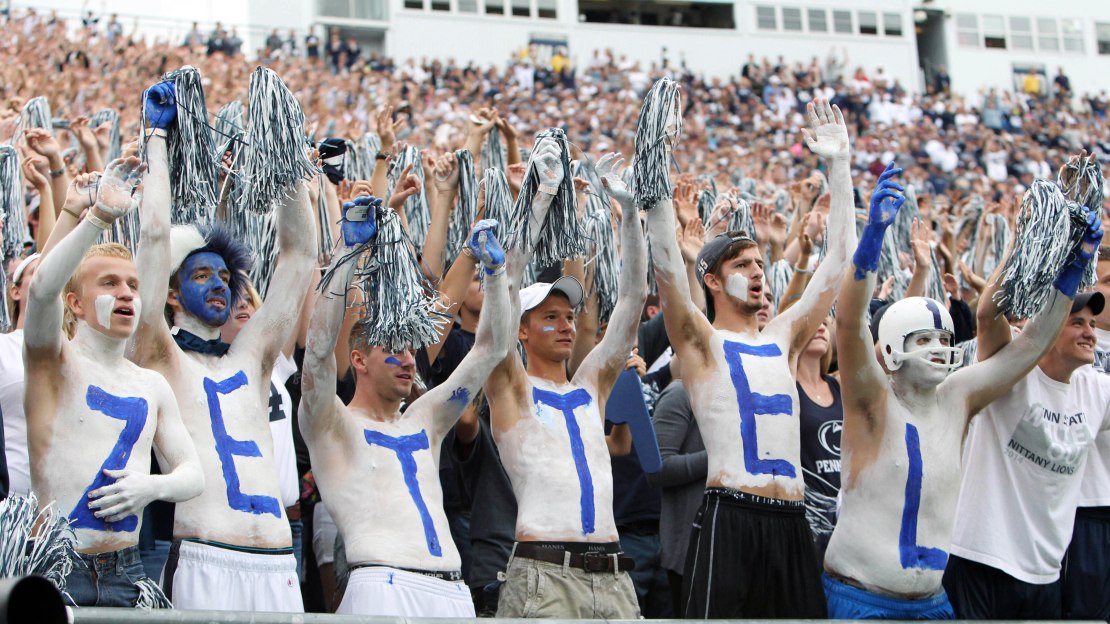 The Big Ten has 54 non-conference games in the book with just two to go (Rutgers and Penn State both still will play Army). And, it did pretty well vs Power Five leagues, going 10-9.

But before Big Ten action commences Saturday, let?s take a look back to digest what we witnessed in non-conference action.

Runner-up: Jordan Howard, RB, Indiana. The UAB transfer has been a revelation, leading the nation in rushing through four weeks with 675 yards (168.8 ypg).

Best defensive player: Riley Bullough, LB, Michigan State. The latest in the long line of Bulloughs, Riley has been a tackling machine in the middle of another ferocious Spartan defense. He paces the Big Ten in tackles, averaging 11.5, despite being suspended for the first half of last week's game vs. Central Michigan due to a Week 3 targeting call.

Runners-up: Anthony Walker, LB, Northwestern. Is this the program?s best defender since ? Pat Fitzgerald? Walker, already a two-time Big Ten Defensive Player of the Week recipient, is No. 3 in the league in stops, leading a defense that has been the backbone of NU?s surprising 4-0 start; Carl Nassib, DE, Penn State. The former walk-on is thriving in his final season, having already registered seven sacks, one interception and three forced fumbles on a line that features bigger names in Anthony Zettel and Austin Johnson.

Best coach: Kirk Ferentz, Iowa. The Kirk Ferentz Fan Club didn?t have a lot of members in August. Now, it?s filling up. Since an 11-2 run in 2009, the Hawkeyes have gone 19-21 in the Big Ten. But Iowa is 4-0 this season and dreaming big in the Big Ten West.

Runners-up: Jim Harbaugh, Michigan. The Wolverines (3-1) are ranked No. 22 in the AP Poll, their first appearance in the poll since November 2013. Who saw that coming this soon? Oh, and the one loss was a narrow one in the season opener at Utah, which is now ranked No. 10; Pat Fitzgerald, Northwestern. Perhaps no Big Ten team has surprised more than the 16th-ranked Wildcats, fresh off back-to-back 5-7 campaigns, and no Big Ten team has two better wins (vs. Stanford & at Duke).

Best freshman: Saquon Barkley, RB, Penn State. The Nittany Lions needed to establish the run in 2015, and the electrifying true freshman has been a revelation. He has rushed 42 times for 373 yards, averaging 8.9 yards per carry with three TDs and two 100-yard games. Barkley ranks No. 5 in the Big Ten in rushing (93.2 ypg). This kid is gonna be special. Heck, he already is. Too bad he got hurt on Saturday. Hope he?ll be back soon.

Runner-up: Markell Jones, RB, Purdue. The former Mr. Indiana is off to a very nice start in West Lafayette, with 248 yards rushing and three touchdowns on 38 carries (6.5 yards per carry), to go along with nine receptions for 56 yards and another score.

We'll say it again: @PennStateFball RB Saquon Barkley is going to be special. Brought to you by @hotelsdotcom. http://t.co/vKTT07MPbj

Best performance: Anthony Walker, LB, Northwestern. The linebacker notched 10 tackles, three tackles for loss, two pass breakups and a half sack with a fumble recovery vs. Stanford; he also starred vs. Duke, recording a career-high 19 tackles to lead Northwestern to the road win.

Best win: Northwestern 16, Stanford 6. This one is pretty easy. The Wildcats stunned the Cardinal, now 3-1 ranked and No. 18, in the season opener, limiting one of the Pac-12 favorites to 240 total yards and two field goals. Unbelievable. This win will carry a lot of weight the rest of the season.

Best game: Washington State 37, Rutgers 34. Yes, it was a loss for the Big Ten. And, yes, it was a game between two teams likely to finish near the bottom of their conferences. But, man, was this game exciting! It featured four lead changes in the fourth quarter, including two in the final 1:31, as the Cougars scored the game-winner with 13 seconds left, this after Janarion Grant returned a punt 55 yards for what looked like the decisive score. Speaking of Grant, as mentioned in the "Best performance" section, he exploded for a program-record 337 all-purpose yards.

Runner-up: Miami (FL) 36, Nebraska 33 (OT). Another one where the Big Ten was the loser, but there's no denying the excitement of this one between two longtime rivals. Heck, the Cornhuskers rallied from a 23-point deficit in the fourth quarter to force overtime.

Best play: De'Veon Smith TD run vs. BYU. This was 60 yards of deliciousness. Forget the distance, though, this run was all about Smith, somehow, emerging from a sea of bodies at the line of scrimmage and shedding multiple tackles from the same defender on his way into the end zone.

Best moment: It has to be the emotional scene of former Iowa defensive back Brett Greenwood leading the Hawkeyes onto the field as the honorary captain for the Week 3 primetime tilt vs. Pitt. Greenwood, who led the Big Ten in interceptions (5) in 2010, collapsed during a workout in 2011 and was in a coma as a result of suffering an anoxic brain injury caused by heart arrhythmia. He was involved in the coin toss, too.

Runner-up: Hours after Anthony Zettel's father lost his battle with cancer, the Penn State standout defensive tackle suited up and starred in Saturday's win vs. San Diego State, earning Big Ten Defensive Player of the Week honors in the process. There a pregame moment between Zettel and his family that tugged at the heartstrings, too. Watch it here or at the top of the post.

Editor's note: The Brett Greenwood moment was incorrectly omitted when this post was first published.

Biggest surprise: Northwestern. Take your pick between Northwestern and Iowa, both 4-0, really. The Wildcats were coming off consecutive 5-7 seasons but have forged a perfect start. And no team has two better wins than NU, which has dispatched No. 21 Stanford (16-6) and Duke (19-10). Could Northwestern win the West? Hmmm. Have to give a quick shout-out to Michigan, which has the nation?s most-glistening 3-1 mark coming off a 31-0 pasting of BYU.

Runner-up: Iowa. The Hawkeyes are 4-0, and they're doing it in exciting fashion, calling fake field goals and scoring lots of points. This sure doesn't look like the Hawkeyes of the last handful of seasons.

Biggest disappointment: Rutgers. The Scarlet Knights looked to build on a solid Big Ten debut that saw RU go 8-5 with a bowl win. Alas, turmoil and tumult have enveloped the program. Player arrests and the three-game suspension of coach Kyle Flood for improper contact with a faculty member have been lowlights in a 2-2 start.

Runner-up: Purdue. The Charlie Brown of the Big Ten, the 1-3 Boilermakers look destined for a two- or three- win season-at best. Losses at Marshall and to Bowling Green have been killer.

Biggest injury: Corey Clement, RB, Wisconsin. The Badgers got just eight totes from their expected superstar in a season-opening loss to Alabama. He hasn?t played since and was ruled out for 4-6 weeks last week with a sports hernia. Get back soon, Corey!

Runner-up: Ed Davis, LB, Michigan State. It happened in the preseason, but the veteran star was a huge loss for Mark Dantonio's team.

Biggest story: Ohio State quarterbacks. This was supposed to be a luxury problem in Columbus: Which stud QB should the Buckeyes start-postseason stud Cardale Jones or 2014 Big Ten Offensive Player of the Year J.T. Barrett? OSU couldn?t make a bad choice, right? Well, the sailing hasn?t been smooth, as neither has impressed. Lack of an apparent logical plan on how to use the signal-callers also has had to have had a negative impact.

Runner-up: Northwestern. The team, in general, but, more specific, the defense. Prior to last Saturday's win over Ball State, the Wildcats had allowed one touchdown in the first three games (vs. Stanford, vs. Eastern Illinois, at Duke). Add it all up, and Northwestern is surrendering 8.8 points per game, good enough for third in FBS.

Biggest upcoming game: Michigan State at Ohio State. Nov. 21 has been circled for months. This very well could be a clash of unbeaten teams ranked 1-2 in the nation. How big would this game be?

Runner-up: Michigan State/Ohio State at Michigan. The surging and improved Wolverines host the Spartans on Oct. 17 and the defending national champs in the season finale Nov. 28. Don?t be shocked if the upstart Wolverines knock off one of those clubs.