What did Tom Dienhart learn about Big Ten in Week 4? Find out here! 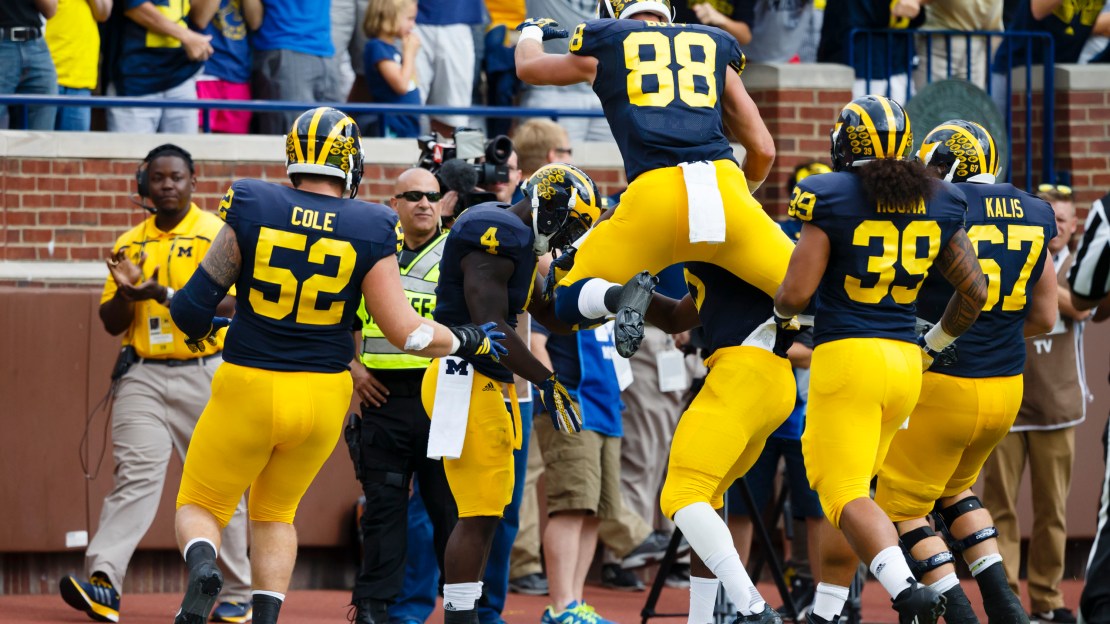 With 14 games in Week 4, the final week on full-on non-conference play, there was a lot to learn this Saturday in the Big Ten. Take a seat and listen.

1. Michigan is gonna have a say in the Big Ten race. The Wolverines may be better than any of us suspected and could pose huge issues for the Spartans (Oct. 17) and Buckeyes (Nov. 28) when they come to Ann Arbor. Most felt this team would win seven or eight games. Now, the Wolverines may push by those expectations after an impressive 3-1 start. Saturday?s 31-0 domination of No. 22 BYU was awe-inspiring. Jim Harbaugh has his power-running game in high gear. And the defense is rolling, shutting out BYU. The Cougars hadn?t been blanked since 2003.

2. Ohio State?s quarterback situation looks OK ? for at least one week. Cardale Jones started for the fourth time, hitting 19-of-33 passes for 288 yards with two TDs and a pick. The 19 completions and 288 yards were career highs in the 38-12 win vs. Western Michigan. But if Jones had struggled, would he have been pulled in favor of J.T. Barrett? This is still a situation that needs to be monitored closely.

3. Wisconsin is lurking in the weeds. While Ohio State, Michigan State, Michigan, Iowa and Northwestern steal the headlines, the Badgers have won three in a row since opening with a loss to Alabama. Yes, the offense is still finding its way in the absence of RB Corey Clement (out 4-6 weeks with injury), but Wisconsin did eclipse the 200-yard rushing mark for the first time in 2015 on Saturday. And the defense continues to shine, as Wisconsin has outscored its last three foes, 114-3, including the 28-0 whitewashing of Hawaii. A visit from Iowa next week will be telling for the Badgers.

4. Rutgers should send Kansas a big ?thank you? note for visiting Piscataway. The Scarlet Knights got a much-needed 27-14 win vs. the 0-3 Jayhawks to end a two-game losing skid. This was a much-needed taste of success for a program still dealing with the suspension of coach Kyle Flood as it adjusts to personnel losses from off-field incidents. Rutgers has had six players kicked off the team since August because of arrests and had star receiver Leonte Carroo suspended indefinitely for an altercation outside the stadium after a loss to Washington State. And before the game, defensive tackle Darius Hamilton announced that he would not play again this season because of a lower-body injury. RU needed some positive mojo with a brutal October in the Big Ten conference coming up with No. 2 Michigan State, No. 1 Ohio State and No. 22 Wisconsin on tap plus currently undefeated Indiana.

5. Mitch Leidner is what he is. Look, the burly junior Minnesota signal-caller never will remind us of Dan Marino. While it isn't always pretty and he can often frustrate Minnesota fans, Leidner gets the job done. He showed his leadership, moxie and savvy in engineering a game-winning 78-yard TD drive late in the fourth quarter to forge a 27-24 win vs. Ohio. He hit 22-of-32 passes for a career-high 264 yards a week after there were cries for his head in a listless 10-7 triumph vs. Kent State.

6. Iowa isn?t going anywhere. The Hawkeyes? 62-16 win vs. North Texas was the program?s most explosive offensive effort since 2002. This offense looks nothing like it has in recent years. The Hawkeyes have run-pass balance with Jordan Canzeri and C.J. Beathard, who has been a revelation with his ability to throw down field. Iowa showed great balance vs. North Texas with 278 yards passing and 210 yards rushing. Next week?s game at Wisconsin will be a great litmus test for Iowa.

7. Indiana is bowl-bound. I know, the 4-0 Hoosiers still need to win two more games. But they have eight to play. And, you have to like IU?s chances to win two of the following games: at Penn State, vs. Rutgers, at Maryland and at Purdue. Indiana hasn?t been to a bowl since 2007. The Hoosiers have now won five in a row dating to last season, the longest streak since 1987.

8. Maryland and Purdue are in dire straits. The Terrapins are a train wreck on defense. West Virginia notched 601 yards in cruising to a 45-6 win. Earlier this season, Maryland was strafed for 692 yards and 48 points in a loss to Bowling Green. The Terps switched defensive coordinators and schemes, going from a 3-4 to a 4-3. The change isn?t paying dividends. If all of that isn?t bad enough, Maryland?s quarterback situation is disastrous. The Terps already have tossed 12 picks in just four games. As Purdue, optimism was high in August as it entered its third season under Darrell Hazell. Following Saturday's home loss to Bowling Green, the Boilermakers are 1-3. The October schedule is brutal, opening at Michigan State, vs. Minnesota, at Wisconsin and vs. Nebraska. So, a 1-7 start is very possible. Hazell is 5-23 at Purdue. Three of the wins are vs. FCS schools; another is vs. a MAC team; the other is vs. Illinois. Danny Hope can?t be blamed for all of this.

9. You better get used to these close ones, Nebraska fans. Another Saturday, another Nebraska game that went down to the wire. The Cornhuskers held off Southern Miss, which erupted for 21 points in the fourth quarter, to make it three out of four games decided by one score. For a nice change, though, this time Nebraska was on the right end of the narrow decision, this after losing on a last-second Hail Mary to BYU in the opener and falling in overtime last week at Miami (FL).

10. Northwestern?s defense has been a big story all season. Now, the Wildcats may be coming to life on offense with 546 yards in a 24-19 win vs. Ball State. Justin Jackson ran for 184 yards. Best of all, QB Clayton Thorson may have taken a step forward by hitting 18-of-31 passes for 256 yards with three TDs.