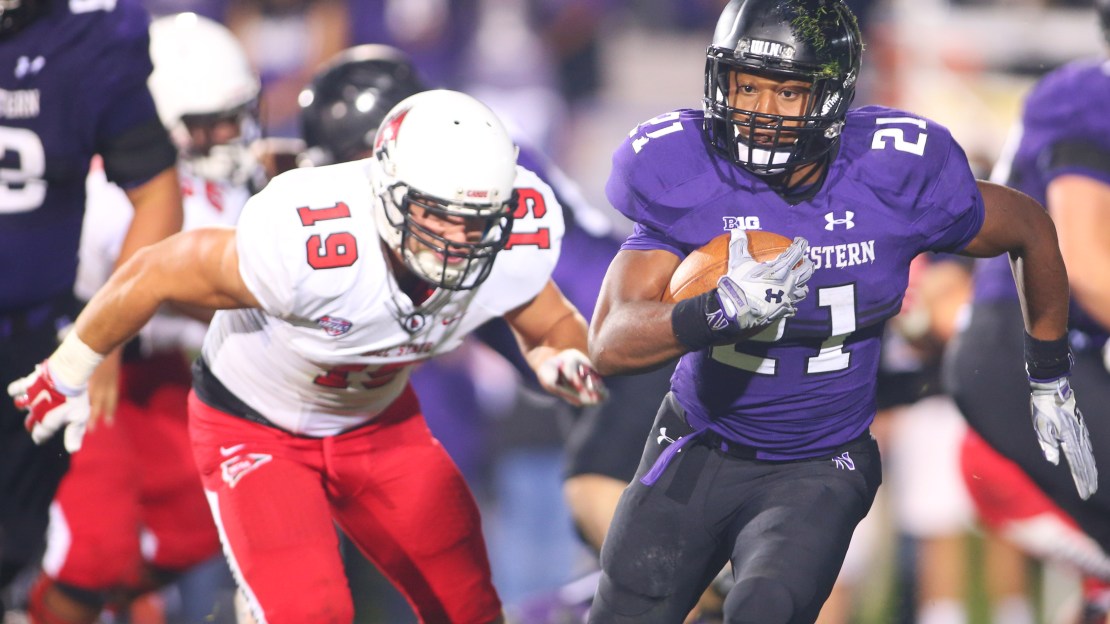 What a day of Big Ten football!

The conference finished 12-2 on Saturday, highlighted by Michigan's impressive 31-0 victory over BYU.

With 14 total games on the slate, there were plenty of outstanding individual performances as well.

Here is a look at my top 10 performers from Saturday?s Big Ten football action.

Shilique Calhoun, DE, Michigan State. This guy looked like a man among boys in Michigan State's 30-10 win over Central Michigan on Saturday. Calhoun recorded six tackles, three sacks, one pass breakup and a blocked field goal in the victory. That's what you call stuffing the stat sheet!

C.J. Beathard, QB, Iowa. Beathard continues to impress this season. The Hawkeyes' quarterback opened the game with 15 straight completions, the best start by a Big Ten quarterback since Wisconsin?s Russell Wilson (16-16) in 2011. He finished 18-of-21 for a career-high 278 yards and two touchdowns in Iowa's commanding 62-16 win over North Texas.

Tommy Armstrong, QB, Nebraska. Is there a Big Ten quarterback playing better than Armstrong? He was outstanding again on Saturday, completing 23-of-35 passes for 368 yards and two touchdowns in an impressive 36-28 win over Southern Miss. Armstrong also added 63 yards on the ground and a rushing touchdown. That will earn you a spot on this list every time!

Jordan Howard, RB, Indiana. How good has Howard been this season? Through four games, Howard's numbers are better than All-American Melvin Gordon's were at this point last season. He had another huge game on Saturday, rushing for 168 yards and a score in Indiana's 31-24 victory over Wake Forest.

More on Jordan Howard: only FBS player in last 20 seasons with 140+ rush yards in each of his first 4 games at a school. #Indiana #Hoosiers

Cardale Jones, QB, Ohio State. This was Jones' best game of the season. The Buckeyes' do-it-all quarterback threw for a career-high 288 yards and two touchdowns in Ohio State's 38-12 victory over Western Michigan. He also added 32 yards on the ground in the win. Those are the type of numbers fans expected from the Buckeyes' star quarterback this season.

Jordan Canzeri with 8 rush TD this season, most by #Iowa player through 4 games since 12 by Tavian Banks in 1997. #Hawkeyes

David Blough, QB, Purdue. Making his first career start, Blough was nothing short of outstanding on Saturday. He completed 29-of-39 passes for 340 yards and two scores in Purdue's 35-28 loss to Bowling Green. Blough also added 11 yards and a touchdown on the ground. If he can continue to put up those type of numbers, Purdue should win some games.

Taiwan Deal, RB, Wisconsin. No Corey Clement, no problem. Deal was outstanding in the backfield for the Badgers, rushing for a career-high 147 yards and two scores in Wisconsin's 28-0 win over Hawaii. As a team, Deal and the Badgers racked up 321 rushing yards, while holding Hawaii to just 15 yards on the ground. That will win you some games.

Justin Jackson, RB, Northwestern. Jackson ran all over Ball State's defense on Saturday night, racking up a career-best 184 yards in Northwestern's 24-19 win. The Wildcats' talented back also caught two passes for 20 yards in the victory. He has now totaled 516 yards on the ground this season and looks on pace to top the 1,000-yard mark against this year.