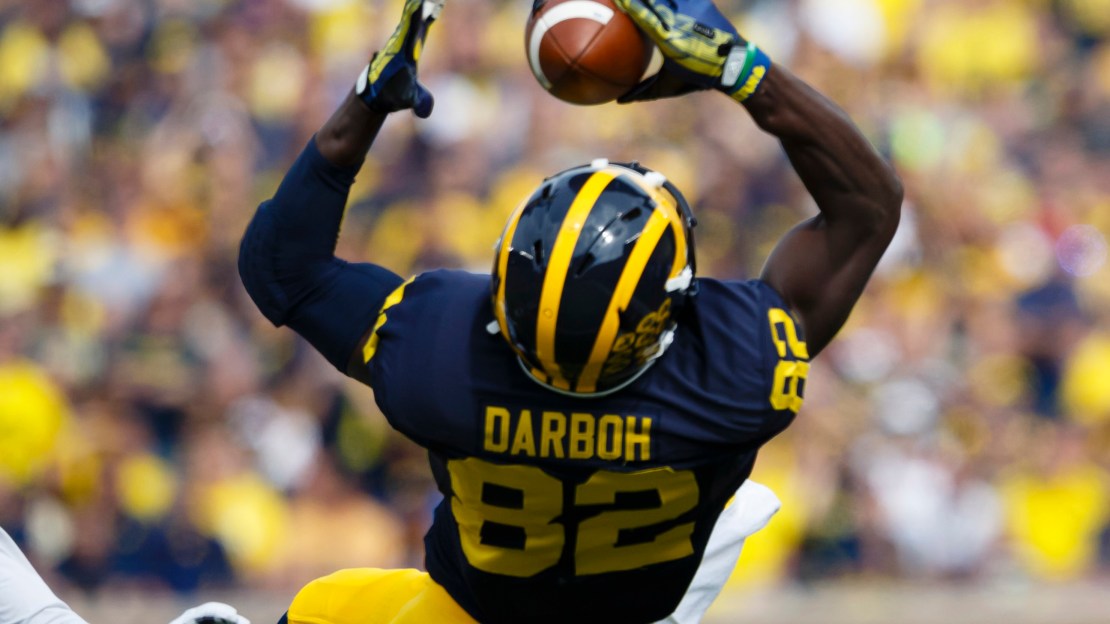 The Big Ten put a lid on almost all of its non-league play (just two games left) in Week 4. And, it was impossible not to notice the dominance of Michigan.

Get my roundup of Week 4 in the Big Ten below:

Biggest surprise: It wasn?t a surprise to see Michigan beat No. 22 BYU. But it WAS a surprise to see the Wolverines win, 31-0. Michigan held the Cougars to 105 yards and shut them out for the first time since 2003. BYU QB Tanner Mangum was just 12-of-28 passing for 55 yards. Read my take on Michigan.

Biggest disappointment: Purdue. The Boilermakers were stocked with veteran talent entering Darrell Hazell?s third season. Progress was expected. Alas, 2015 is beginning to look a lot like 2013 and 2014 after a depressing home loss to Bowling Green moved Purdue to 1-3. Will the Boilermakers win another game? It?s a legitimate question for a program that simply can?t get on track.

Play this again: Let?s go with Minnesota?s 27-24 victory vs. Ohio. It was filled with drama at the end. The Bobcats kicked a field goal with 2:36 left to push their lead to 24-20. But the Golden Gophers rallied to score a game-winning TD with 30 seconds left to take a 27-24 lead. Embattled QB Mitch Leidner engineered the 78-yard game-winning drive and finished 22-of-32 for a career-high 264 yards. It wasn't over there, though. Ohio got a big return to near midfield, and, attempting to send the game to overtime with a field goal, Ohio was called for a controversial delay of game penalty. The flag pushed Ohio out of field goal range and forced it to attempt a last-second Hail Mary, which went incomplete.

Never play this again: Iowa?s 62-16 whipping of North Texas was as lopsided as the final score would indicate. The Hawkeyes led 35-13 at halftime and never looked back. The win was the 119th Big Ten triumph for Kirk Ferentz, which ties him with Barry Alvarez for ninth on the all-time Big Ten list.

Best play: Tough call, as Michigan had two worthy plays. Amara Darboh made a spectacular one-handed catch that reminded many of Odell Beckham Jr.'s circus catch last season. Not long after that, De?Veon Smith made a run for the ages. Really. He emerged from a scrum of players to spring down field. He then made a BYU defender trying to tackle him in the open field look hapless en route to scoring a TD on a 60-yard jaunt.

Are you kidding?? WOW!

Illinois: B-
Indiana: A
Iowa: A+
Maryland: F
Michigan: A
Michigan State: B-
Minnesota: C+
Nebraska: B-
Northwestern: B
Ohio State: B+
Penn State: B
Purdue: F
Rutgers: B
Wisconsin: A

Indiana. The Hoosiers moved to 4-0 with a 31-24 win at Wake Forest. It?s the first time since 1990 that Indiana is 4-0. And, bowl-eligibility looks to be a foregone conclusion. Now, a bigger question: How many wins can IU get? And how good of a bowl bid can it secure?

Michigan. After opening with a 24-17 loss at Utah, which sure looks legit, by the way, the Wolverines have ripped off three dominating victories in a row vs. Oregon State, UNLV and now BYU. Michigan could be 5-1 when it welcomes Michigan State on Oct. 17, as it plays at Maryland next week and then at home vs. Northwestern.

Northwestern. The Wildcats hummed along to 4-0 with a methodical 24-19 win vs. Ball State that saw the offense come to life with 546 yards.

Purdue. All of the optimistic talk from August has evaporated in a depressing 1-3 start that has included losses at Marshall and at home to Bowling Green. A rugged October schedule looms for Purdue, which could be staring at a 1-7 start.

Maryland. The Terrapins got crushed, 45-6, at West Virginia, its ninth win in the last 10 meetings vs. Maryland. Nothing went right. The Mountaineers had 601 yards of offense. Earlier this season, Bowling Green ripped Maryland for 692 yards and 48 points.

Michigan RB De?Veon Smith ran 16 times for 125 with one spectacular 60-yard TD run that was one for the ages vs. BYU.

Purdue QB David Blough hit 29-of-39 passes for 340 yards with two TDs and a pick in the first start of his career.

Nebraska QB Tommy Armstrong hit 23-of-35 passes for 368 yards with two touchdowns and a pick in a win vs. Southern Miss.

1. 2. 3. 4! Jordan Canzeri has tied the @HawkeyeFootball record for most touchdowns in a single game. http://t.co/PNdsjUFGbV

Indiana RB Jordan Howard, the nation's leading rusher, racked up 168 yards and one touchdown in the Hoosiers' win at Wake Forest.

Ohio State LB Raekwon McMillan tallied a career-high 16 tackles and added a sack in the Buckeyes' win vs. Western Michigan.

Minnesota RB Shannon Brooks introduced himself to the Big Ten with 10 carries for 82 yards with two TDs-including the game-winner–vs. Ohio. The freshman looks good.

Penn State QB Christian Hackenberg hit 21-of-35 passes for 296 yards with three TDs vs. San Diego State. He entered the game with one touchdown pass.

Penn State DT Anthony Zettel, playing hours after his father's death, tallied a team-high seven tackles, to go along with 0.5 sacks and a fumble recovery.

Northwestern RB Justin Jackson ran for a career-high 184 yards on 33 carries in a win vs. Ball State.

Wisconsin RB Taiwan Deal ran 26 times for 147 yards and two TDs in a win vs. Hawaii. Deal was a big reason why the Badgers finished with 326 yards rushing.

12, games in a row that Michigan State has scored at least 30 points. The Spartans dispatched Central Michigan, 30-10.

27, career wins for Connor Cook, which is tied with Kirk Cousins for the best in school history.

14, career touchdown catches for Josiah Price, which ranks No. 1 among tight ends in Michigan State history.

17, consecutive wins for reigning national champ and No. 1 Ohio State.

5, wins in a row for Indiana, dating to last season. The last time IU won five in a row was 1987; interceptions thrown by Maryland vs. WVU.

15, consecutive completions to start the game for Iowa QB C.J. Beathard; yards rushing allowed by Wisconsin vs. Hawaii, which finished with 255 yards in being shutout.

3, TD passes for Northwestern?s Clayton Thorson, who had 256 yards passing; points Wisconsin has allowed in three wins since season-opening loss to Alabama

11, catches by Nebraska?s Jordan Westerkamp which went for 118 yards and a TD. Brandon Reilly also had a game, making three catches for 112 vs. USM.

8, wins in a row for Michigan State, dating back to last season.

20, games in a row Ohio State?s Michael Thomas has caught a pass.

71, yards Penn State DT Austin Johnson rumbled for a TD with a fumble.

20, yards Ohio State DT Adolphus Washington rumbled for a TD with an interception.

"I thought I was down for a second. Once I got to the second level, I was not going to let No. 15 tackle me." - Michigan RB De'Veon Smith, on highlight-reel touchdown run

"We didn't want this to be a trap game, we didn't want to look ahead (to playing Ohio State) and end up slipping up. But games like this are bringing us closer together, showing us that we've got to keep fighting throughout the game." - Indiana RB Jordan Howard, on Indiana?s fourth straight win to open the season

"Four and 0 is exactly where we wanted to be. We can't let that get to us…we'll be ready for Big Ten play." - Iowa RB Jordan Canzeri, on Iowa?s 4-0 start

?I've been a competitive kid my entire life and at no point was I going to back down from any type of competition." - Minnesota QB Mitch Leidner, on his rough start to the season