Dienhart: Is it time for Big Ten to start being afraid of Michigan? 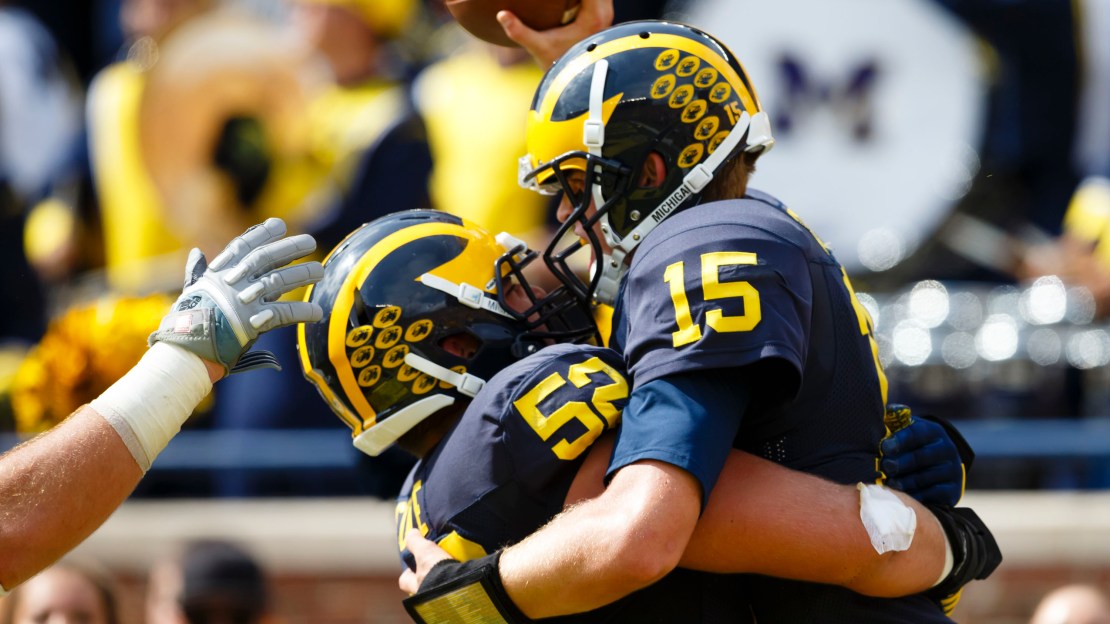 Is it time to re-think expectations for Michigan?

The Wolverines? 31-0 domination of BYU was impressive and complete in every way imaginable. It?s difficult to envision Michigan playing much better this season. This was a BYU squad that was ranked No. 22 and was battle-tested, winning at Nebraska and vs. No. 20 Boise State before falling by one point at No. 10 UCLA last week. But the Cougars looked like a FCS team today in Ann Arbor, suffering their first shutout in 143 games dating back 12 years to 2003.

"Our team started fast, both offensively and defensively, scoring on five straight drives and four three-and-outs by the defense," Michigan coach Jim Harbaugh said. "It was a heck of a job by the defense, a great shutout and to only give up 105 yards, I haven't been a part of one of those, so great effort by all of our defensive players and coaches.?

Now hear this: The Big Ten title will go through Ann Arbor. The No. 2 Spartans come to Michigan on Oct. 17. And in the season-finale on Nov. 28, No. 1 Ohio State comes to town.

Are you thinking what I am thinking? That?s right, the Wolverines could have a good shot to beat one of those two teams. Heck, maybe Michigan will beat them both and win the Big Ten East. Hey, now is the time to dream big. After today?s annihilation of BYU, anything seems possible for the Wolverines.

This Michigan squad has confidence and is well-coached. Headset-less Brady Hoke and his short-sleeved shirt have been replaced with hyper Jim Harbaugh and his Sharpie, play card and Mother Goose glasses. It?s a whole new ball game in the Big House. It may be time for the rest of the Big Ten to start getting afraid.

Michigan is now 3-1 as it enters Big Ten play. That?s the record most pundits felt the Wolverines would have after four weeks-but it has been very dominating in going 3-1. And, Michigan easily could be 4-0, falling by just a touchdown in the opener at Utah. If only Jake Rudock had hit those wide-open receivers.

Peeking ahead, Michigan may be able to push its record to 5-1, as the Wolverines open league play at Maryland next week and then return home to take on Northwestern. Then comes a visit from Michigan State on Oct. 17. How big would that game be if Michigan was 5-1 and the Spartans were 6-0?

"DJ Durkin deserves to take a deep, long bow there, as well as everybody on the defensive side of the ball," Harbaugh said about his defensive coordinator.

This is Michigan football.

The style was epitomized by a rugged 60-yard TD run by De?Veon Smith-who later left with an ankle/foot injury–that saw him power through a pile of Cougars and run over another in the open field. Yes, it?s early in the season, but it may end up being the play of the year for Michigan.

"I think the news will be good on De'Veon (and his injury)," Harbaugh said. "Should be good."

Are there concerns for Harbaugh? You bet. There isn?t a lot of big-play ability on offense. And Jake Rudock is-at best-a game manager. He?s college quarterbacking?s answer to wing tips: safe, conservative, not flashy, gets the job done.

Rudock must continue to play within himself like he did today in hitting 14-of-25 passes for 194 yards with a TD. Make the makeable pass, limit mistakes and turnovers.

"I saw (Rudock) having fun and loosening up and coming along really well,? said Harbaugh. ?We all believe in him, have faith in him, and I thought he had a heck of a ball game.?

The power rushing attack that continues to emerge should provide Rudock with plenty of opportunity to hit some play-action passes to a nice collection of pass catchers led by Amara Darboh and Jehu Chesson on the edge and tight end Jake Butt. Darboh was a star today. He became a U.S. citizen earlier this week and celebrated with a spectacular one-handed catch.

The optimism around Harbaugh?s arrival caused Michigan fans to hyperventilate in the offseason. Now, this 3-1 start capped by a destruction of a ranked BYU squad should cause full-scale seizures among Wolverine fans who are dreaming of big possibilities.

?(It was) a great win for (Rudock) and for everybody on our team; a good team victory and now we've got to go on the road, that'll be a big challenge starting the Big Ten season," Harbaugh said.

This is gonna be fun.games.games.