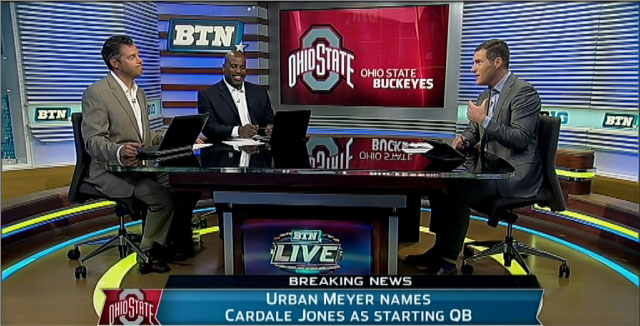 Week 4 is on our doorstep-and it?s the last round of non-conference games. After this Saturday, most schools should have a pretty good idea of what type of team they have heading into Big Ten action.

Here are some hard takes entering a hefty Saturday of action that features 14 games.

1. It took a few days, but Urban Meyer finally revealed to America that Cardale Jones will remain Ohio State?s starting quarterback. That?s just dandy. What I really want to know is this: Is Meyer ready to stick with him? That hasn?t been the case, as the staff has yanked Jones when he has struggled and subbed in J.T. Barrett. I get the notion that ?you have to perform to keep you job, blah, blah, blah.? But quarterback is a bit different. I think Jones needs to be given time to work through his rough stretches without fear of getting pulled. The longer this lack of clarity at quarterback drags on, the more likely it could prove to be detrimental to Ohio State?s big dream season.

2. No Corey Clement for four to six weeks because of a sports hernia injury, no problem at Wisconsin. Reserves Dare Ogunbowale and Taiwan Deal aren?t of Clement?s ilk, but they are capable enough. Besides, Paul Chryst is an offensive guru who will make this attack go even if he has to lean on QB Joel Stave (which may not be a bad option). While many focus on the 3-0 starts of Northwestern and Iowa in the Big Ten West, don?t sleep on 2-1 Wisconsin. In fact, doesn?t it seem like many already have forgotten about the Badgers? The Badgers-whose lone loss was to Alabama–are still the team to beat. Wisconsin should make quick work of Hawaii this week. Then comes the Big Ten opener vs. Iowa, which should be very revealing.

3. Is this the week Minnesota turns the page on the Mitch Leidner era? Perhaps. True freshman Demry Croft was warming up last week as Leidner sailed ducks across TCF Bank Stadium. You get the feeling it?s gonna take a dire circumstance for Jerry Kill to make a QB switch-like Minnesota losing at home to Ohio. I hope it doesn?t come to that.

4. Got to applaud Purdue coach Darrell Hazell for switching quarterbacks just three weeks into the season. Austin Appleby won the job in camp and proceeded to throw a horrendous Pick Six on Purdue?s very first play of 2015. Not a good omen. Now, the David Blough era begins in West Lafayette. True, he couldn?t beat out Appleby in camp. Still, Blough is a former Elite Eleven quarterback whose upside is intriguing. This may be the beginning of something great ? or not. Besides, what does Purdue have to lose by making a QB flip? Exactly. Blough can throws picks just as easily as Appleby.

5. Indiana is 3-0, and that's a cool thing. It?s nice to see the patience of Hoosier A.D. Fred Glass get rewarded. He has stuck by Kevin Wilson, who slowly has established a foundation in Bloomington since arriving in 2011. Now, IU looks poised to earn its first bowl since 2007-and just its second since 1993. Indiana has at least five games left that it should have a good chance to win: at Wake Forest; at Penn State; Rutgers; at Maryland; at Purdue. If the Hoosiers don?t punch their postseason ticket this season, then when will it happen? Did I just jinx IU?

6. There has been no more hard-luck team than Nebraska, which is 1-2 for the first time since 1981. The Huskers lost their opener on a Hail Mary to BYU. Last week, Nebraska fell in overtime at Miami (Fla.) after rallying for 23 points in the fourth quarter to forge a tie. Imagine how different the narrative would be in Lincoln if NU was 3-0 in Mike Riley?s debut? Either way, no need to panic. Riley?s cool hand is perfect for situations like this. The Cornhuskers still can be a contender in the West-if the defense gets into shape. Nebraska is No. 13 overall in defense (451.3 ypg) with most of the damage coming via the pass, as NU is No. 13 (357.0 ypg). The Huskers should win their next two-vs. Southern Miss and at Illinois. Then comes a visit from nemesis Wisconsin on Oct. 10 that will be revealing.

7. No Big Ten team has been more impressive in 2015 than Northwestern. The home win vs. No. 21 Stanford and then the triumph at Duke give the Wildcats the two most impressive wins for any Big Ten team so far in 2015. Home games with Ball State and Minnesota are next. What?s it mean? NU could be 5-0 when it goes to Michigan on Oct. 10. How neat would that be?

8. More Northwestern, because I just can?t get enough Purple. While defense and running the ball have been huge keys for the Wildcats, special teams also have been a big factor. NU ran back a kickoff 98 yards for a TD at Duke. The punt team is allowing minus-two yards per return (No. 2 in the nation). The kickoff return team is averaging 40.2 yards per return (No. 3 in the nation). And NU has hit 7-of-8 field goals. No doubt, some of the success can be attributed to Jeff Genyk, the former Wisconsin special teams coach who is working as a consultant for NU.

9. The formula for success for Michigan is pretty obvious: Run the ball, run it again and play tough defense. It?s the same philosophy Jim Harbaugh has used in his previous coaching stops. No shocker. The Wolverines are No. 3 in the Big Ten in scoring defense (12.7 ppg) and No. 3 in total defense (236.7 ypg). And the rushing game is No. 8 in the league (185.0 ypg), a number held back by a poor effort in the opener at Utah. Since then, the Wolverines ran for 254 against UNLV and for 225 yards vs. Oregon State. What?s really exciting for Michigan fans: What?s gonna happen to this attack once Harbaugh gets his Andrew Luck?

10. In case you haven?t noticed: Penn State has won two in a row since that disastrous 27-10 season-opening loss at Temple. The defense has excelled, while the offense is discovering a ground attack with 530 rushing yards the last two games. (Don?t fret about QB Christian Hackenberg. He will come around.) The Nittany Lions are in the midst of a five-game homestand and need to make hay by winning them all. And, that?s a distinct possibility with San Diego State, Army and Indiana on deck before a trip to Ohio State on Oct. 17.