Best of Week 4: BYU's trip to Michigan is intriguing 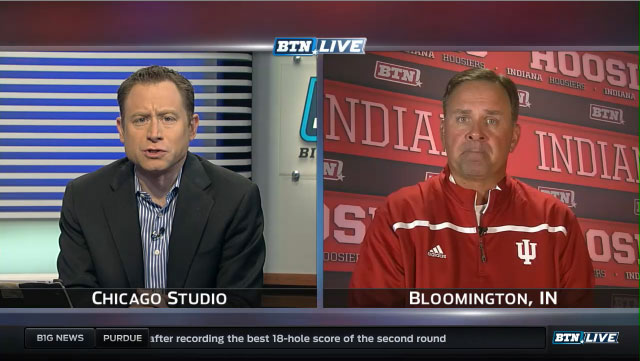 Week 4 is highlighted by two road games: Indiana at Wake Forest and Maryland at West Virginia. The other intriguing tilt in a week that features 14 games: BYU at Michigan. No, Wake Forest isn't a football power in the ACC, but it looks like Goliath compared to Indiana's first three opponents-Southern Illinois, Florida International, Western Kentucky. But know this: Wake has been to one bowl in the last six seasons and went 3-9 in Dave Clawson's first year in 2014. This is a great shot for the Hoosiers to push to 4-0, which hasn't happened since 1990.

Going to West Virginia will be difficult for Maryland. These old rivals played a barn-burner last year that the Mountaineers won in College Park, 40-37. These schools have played 51 times, with the Mountaineers winning eight of the last nine encounters. Maryland hasn't won in Morgantown since 2002.

North Texas will come to Kinnick Stadium led by Coach Dan McCarney, who knows the place well. He is an Iowa alum and was a Hawkeye assistant from 1979-89 under Hayden Fry and later was head coach at Iowa State from 1995-2006. Iowa is trying to start 4-0 for the first time since 2009 when they started 9-0.

It would not be a shock to see Bowling Green waltz into Ross-Ade Stadium and march out with a win vs. Purdue. BG already has won at Maryland. Falcons coach Dino Babers-a Purdue assistant from 1991-93 under Jim Colletto–has a prolific offense led by QB Matt Johnson. Purdue has lost to a MAC team four times in the last six years. BG won in Ross-Ade Stadium 17-14 back in 1972 and it won 27-26 in 2003.

Nebraska has won the last two games vs. Southern Miss. But, no doubt, Cornhuskers fans recall the Golden Eagles taking a 21-17 win in 2004 in Lincoln. This is a Huskers team looking for some mojo after a 1-2 start and trying to avoid its first 1-3 start since 1957.

Northwestern will try to smother Ball State with its awesome defense. The Wildcats have allowed just 16 points this season and they have held their opponents to 10 points or fewer over a three-game stretch for the first time since the 1971-72 seasons. Pat Fitzgerald has to feel like it's Christmas in September.

When Kansas-losers of 10 of its last 11 games–plays at Rutgers, it will mark the first meeting between the programs. The same will be the case when San Diego State plays at Penn State, and Western Michigan plays at Ohio State, which is still playing QB roulette. Cardale Jones is still the starter-but how much will he play Saturday?

Wisconsin will look to continue its home-field mastery in non-conference games. The Badgers have won 34 consecutive non-Big Ten home games, which is the eighth-longest streak in NCAA history.

Reminder: BTN is on YouTube now. Watch a lot of our videos there, including the one so far in our Week 4 football playlist below, and click on the icon in the upper left for more Week 4 videos

Here is a look at the Best of Week 4.

BEST GAME: BYU's trip to Michigan is intriguing. The Wolverines appear to be hitting their stride, winning two in a row after opening with a loss at Utah. The Cougars have played a schedule on steroids so far. BYU began the season winning at Nebraska, beat a ranked Boise State at home, lost by one point at a ranked UCLA team and now they play at Michigan. Oh, star signal-caller Taysom Hill is out for the year with injury so BYU is playing a freshman QB in Tanner Mangum, who threw the Hail Mary pass to beat Nebraska. Michigan's defense has shined. But this will be its toughest test yet. The Wolverines need to avoid trading points with BYU and rely on their run game to grind out a victory.

PLAYER ON THE SPOT: Maryland QB Caleb Rowe needs to play well if the Terps want any shot to win at West Virginia. He was a bit of a mixed bag in his first start last week. Rowe took more shots down field, completing 64 percent of his passes while averaging nine yards per attempt. Perry Hills threw for 306 yards as the starter in the first two games while Rowe had 297 this past Saturday. Hills also averaged only six yards per attempt in the first two games. The bad from Rowe were the turnovers, which have been an issue in his career. He had three interceptions in the win vs. South Florida last week. For his career, Rowe has 16 touchdowns and 15 interceptions.

BEST MATCHUP: It has to be the BYU wideouts vs. the Michigan corners. Cougar targets Mitchell Juergens and Mitch Mathews are formidable. Juergens leads the team with 244 receiving yards, while the 6-6 Mathews leads the squad in catches (17) and touchdowns (3). They each caught a game-winning TD pass in the final minute in the first two games. Wolverine corners Channing Stribling and Jourdan Lewis need to be on their game. Each has been good so far in 2015.

BEST COACHING MATCHUP: There are some good ones. Michigan's Jim Harbaugh vs. BYU's Bronco Mendenhall ? West Virginia's Dana Holgorsen vs. Maryland's Randy Edsall ? Ohio's Frank Solich vs. Minnesota's Jerry Kill ? . But let's go with North Texas' Dan McCarney vs. Iowa's Kirk Ferentz. Each served on Hayden Fry's Iowa staff in the 1980s. And McCarney is an Iowa City native and ex-Hawkeye offensive lineman who is coming home. He also was the head coach at Iowa State. These are two smart coaches.

BEST COORDINATOR MATCHUP: BYU offensive coordinator Robert Anae vs. Michigan defensive coordinator D.J. Durkin. The Wolverines defense looks legit and it will likely get its biggest test of the young season as it faces BYU. The Cougars are averaging more than 432 yards per game with nearly 311 of those yards coming through the air even though star QB Taysom Hill was lost to a season-ending injury in the opener at Nebraska.

UPSET ALERT: Minnesota needs to be careful when Ohio visits. The struggles of the Golden Gopher offense are well-documented. And the Bobcats can move the ball. The last time Ohio played a Big Ten team on the road was in 2012, when it won at Penn State in the season opener. Ohio is 3-0 this season after winning at Idaho and beating Marshall and Southeast Louisiana at home. QB Derrius Vick leads the Bobcats. He has completed more than 69 percent of his passes for 548 yards with four touchdowns and two interceptions. The defense also does well. It has forced nine turnovers in three games this season, which is tied for the fourth-most in the nation. Now would be a good time for Gopher QB Mitch Leidner to snap out of the doldrums. The junior took a step back last week vs. Kent State after not playing badly in his first two games. He threw for a season-low 184 yards and tossed his first two picks. If Leidner struggles, will he finally get pulled?