Two Wisconsin players ejected for targeting in win over Troy 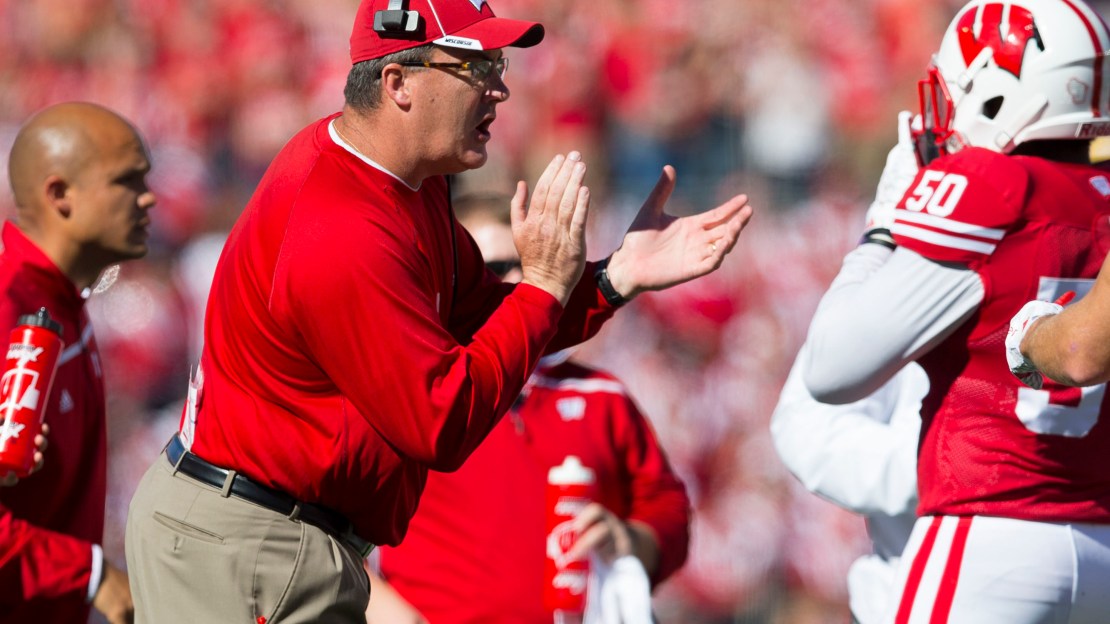 Tough loss as @badgerfootball LB Leon Jacobs was ejected after this hit on the Troy QB.
http://t.co/aWoAxx2ShA

Two Wisconsin football players were ejected for targeting in Wisconsin's 28-3 win over Troy on Saturday afternoon.

The first ejection came late in the first quarter when Badgers linebacker Leon Jacobs made a big hit on Troy quarterback Brandon Silvers on a first down play.

Silvers' helmet flew off after the hit, which you can see in the video at the top of this post.

Later on in the third quarter, Wisconsin sophomore Derrick Tindal was also ejected from the game. This came after Tindal's hit on Troy receiver Ismail Saleem at the end of a catch.

Here is a look at that play.

ICYMI: Here is a look at the hit that led to Derrick Tindal being ejected in today's game against Troy. http://t.co/FGyFnKE8Ph

Both ejections were confirmed after official reviews, which led to boos from the home crowd.

"There's always the gray, and yet it's been clear, the officials are always going to err on the side of player safety," Wisconsin coach Paul Chryst said, "and knowing that there is some gray in it and I think that's the right thing."

Following the game, a pool reporter met with referee Jeffrey Servinski to gather future details about the ejections. Here is a transcript of the interview.

Pool reporter question: What rule was applied on first play that led to the ejection?
Answer: We have the targeting foul, that we have two components of targeting in NCAA football: using the crown of the helmet, as well as targeting a defenseless player. And there are definitions of defenseless players. If you want, I can read you those. The quarterback is one. So it was the quarterback - he?s defenseless. So with a quarterback, any forcible contact to the head or neck area is targeting. So he?s in a defenseless mode, because he had just thrown the ball. It was not roughing the passer, because of the timing of it. So roughing the passer was not on the table. But the contact was to the head or neck area, so we need to look at was it forcible contact to the head or the neck. It was determined that it was. So that was the rule that was applied.

Pool reporter question: Which rule is it?
Answer: That is 9-1-4.

Pool reporter question: So in your opinion the Wisconsin player made contact with the quarterback?s neck or head?
Answer: My opinion is that the foul gets called, we go to replay. Replay either confirms, they stand or they reverse it. The shots that they had confirmed the foul that there was that scenario. I would give you my opinion, but I can?t because I didn?t have the foul.

Pool reporter question: Can you tell me the rule that was applied the second play that led to the ejection?
Answer: We have a receiver, he falls into a defenseless category. Any contact to the head or neck, just like in the other one, we?re going to have a foul. So it?s 9-1-4 that was applied in the second scenario as well.

Pool reporter question: Is there any gray area with that rule? On the AFCA website, it defines what targeting is and it says ?to take aim at an opponent for purposes of attacking with apparent intent that goes beyond making a legal tackle or a legal block or playing the ball. So in the opinion of the crew and the replay official, the second play the Wisconsin player was going beyond making a legal tackle?
Answer: Correct.

Pool reporter question: Do you factor that the receiver is a moving target and the play is happening so fast?
Answer: No.

Pool reporter question: Any benefit of the doubt for the defensive player?
Answer: No.

Pool reporter question: Would you say the benefit of the doubt goes to the offensive player?
Answer: The defensive player, when we have a defenseless player, can not target to the head or neck area.

Pool reporter question: If an offensive player ducks his head, like in the case of the second play, when he?s falling to the ground and ducking his head, does that make a difference?
Answer: He?s a defenseless player. If there?s contact to the head or neck area, we have a targeting.

Pool reporter question: Was the second play a forearm? Any mention of that?
Answer: When you talk about targeting, helmet, forearm, shoulder, anything from that perspective that targets into the head or neck area, it?s a foul. So from replay?s perspective, they just needed to make sure that there?s forcible contact to the head or neck area with a shoulder, forearm or head. To tell you which one it was, I can?t tell you that, other than they confirmed that foul.

Pool reporter question: Replay could have said ? (question interrupted)
Answer: If there would not have been contact to the head or neck area, we would have reversed both scenarios.