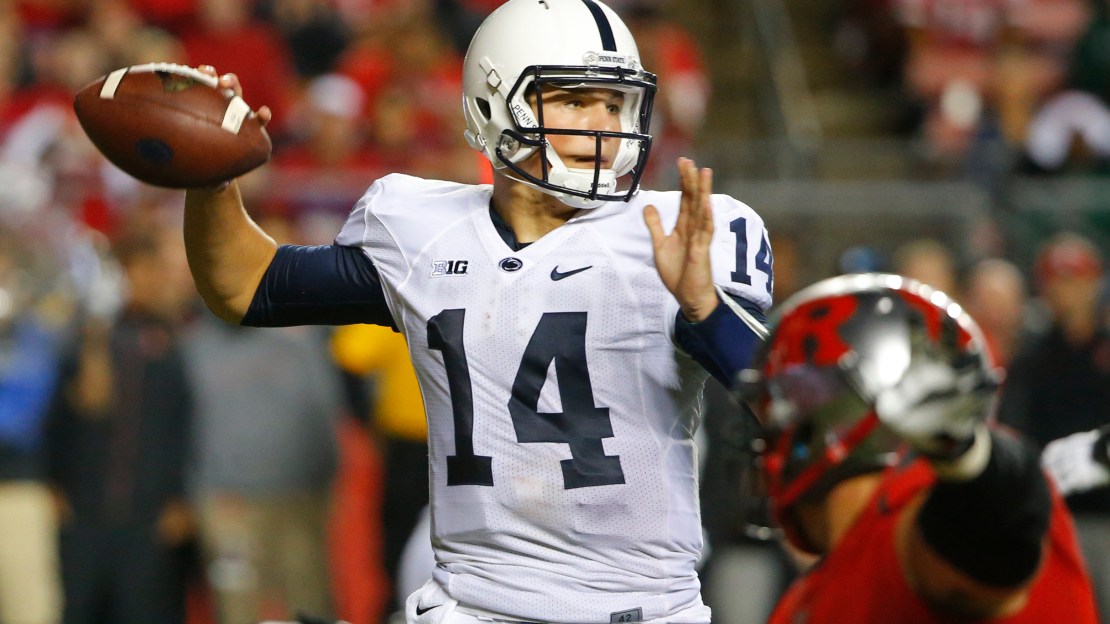 Week 3 offers some intriguing matchups-and it also has the first Big Ten game of the year with Rutgers at Penn State opening the conference slate for the second consecutive season.

Big Ten surprise Northwestern travels to Duke for a ?Revenge of the Nerds? game. Wear white socks with your sandals when watching this one. We will get a chance to see if unbeaten (yes, unbeaten) Illinois is legit as it visits North Carolina. And is 2-0 Iowa really that good? At home vs. Pittsburgh will be another good test. Nebraska can impress by winning at Miami (Fla.).

Here is a look at the 13 games this Saturday.

UNLV (0-2) at Michigan (1-1) – noon ET, BTN/BTN2Go. The odds of UNLV winning in Ann Arbor? Slim and none-especially with health issues surrounding the Rebels? QB. UNLV is 0-2-losing to Northern Illinois and UCLA. And, get this, it is led by a first-year coach (Tony Sanchez) who arrived from the high school ranks. Really. Jim Harbaugh? The guy has coached in the Super Bowl, for crying out loud! The Super Bowl vs. Friday Night Lights? Are you kidding me? Harbaugh can just throw his Sharpie and whistle onto the field and win this one. How about that Michigan defense? It allowed just two yards in the final three quarters vs. Oregon State. The defense has allowed just 237 yards per game thus far. (See, I can make it through one Michigan item and not type ?khakis.?)

Kent State (1-1) at Minnesota (1-1) – noon ET, BTN/BTN2Go. Few schools opened 2015 with a more daunting 1-2 punch than the Golden Gophers, who fell at home to then-No. 2 TCU and then won in overtime at Colorado State. Now, Kent State visits. And, thank god for Kent State, which already has played (and gotten hammered) by a Big Ten team this season in falling 52-3 at Illinois in the opener. Expect Minnesota to rush for, oh, 350 yards and ram-rod the Golden Flashes. Enjoy this one, Minnesota fans! None of you will be complaining about Mitch Leidner after this one.

South Florida (1-1) at Maryland (1-1) – noon ET, ESPNU. How will the Terrapins rebound from last week?s demoralizing 48-27 home loss to Bowling Green, which cratered the Maryland defense for 692 yards? Maryland led 13-6 at halftime-then allowed 42 points. The Bulls have beaten Florida A&M and lost to Florida State. The Terps need to get the bad taste out of their mouth-quickly. Give Randy Edsall credit: He isn?t going to stand by while Maryland struggles. He has made a change at quarterback, tabbing Caleb Rowe the starter. Former starter Perry Hills? He isn?t even on the depth chart anymore. Wow. Last year, the Terps went to Tampa and won, 24-17, in the team?s only meeting.

Air Force (2-0) at Michigan State (2-0) – noon ET, ABC. OK, let?s all say it together-?let down.? That?s exactly what the Spartans could suffer when the Falcons land in East Lansing for the first meeting between these programs. How can Michigan State not come out a little flat coming off yet another program-changing win, this one vs. Oregon? Mark Dantonio will say all the right things, but it may not matter. But this does matter: A report from Colorado says Air Force's quarterback will be out with a knee injury. The backup is a senior, so the Air Force triple-option still may take a few quarters to figure out-and give Spartan fans a few gray hairs. They know the Falcons are 2-0 and have outscored foes 100-23.

Illinois (2-0) at North Carolina (1-1) – noon ET, ESPN2. Could things have started any better for the Fighting Illini? This 2-0 beginning has been the perfect salve for a program that was wounded by turmoil. Illinois has outscored foes, 96-3. How about that defense?! It?s the first time they haven?t allowed a touchdown in a two-game stretch since 1988, and the three points surrendered are the fewest through the first two games since 1942. Now, Illinois takes its show on the road to play 1-1 North Carolina, which opened with a loss to South Carolina and beat FCS North Carolina A&T last week. The Tar Heels are led by one-time Illinois assistant Larry Fedora. Illinois is 0-2 all-time vs. North Carolina. The last meeting was a 34-14 Illini loss in Chapel Hill in 1987.

Northwestern (2-0) at Duke (2-0) – 12:30 p.m. ET, ESPN3. NU already has beaten one nerd this year in Stanford. Now, the Wildcats will take their pocket protectors and black-rimmed glasses to Durham to battle another dork: Duke. David Cutcliffe has the Blue Devils rolling, leading the program to three bowls in a row and a 25-15 mark the last three seasons entering 2015. The Blue Devils are 2-0 this year, beating Tulane and North Carolina Central. The Wildcats have been a Big Ten surprise with a 2-0 start. A big key to success: defense, which has yet to yield a TD. NU has held its opponents to just six points this season. That is the fewest points allowed in any two-game stretch since 1958. A win here, and things will get crazy in Evanston ? well, as crazy as they can get in mid-September.

Troy (1-1) at Wisconsin (1-1) – 3:30 p.m. ET, BTN/BTN2Go. After that lackluster loss to Alabama in the opener, Wisconsin looked more like-well-Wisconsin in blasting Miami (OH) 58-0 last week. Does Troy stand a chance in Madison? Nah. Paul Chryst?s team has some issues to sort through on offense. Is the running game up to par? The Badgers have won 33 straight home games against non-conference opponents, which is tied for the eighth-longest streak in D-I history. Troy will be No. 34. In case you were wondering, the last time Wisconsin lost a non-conference home game was September 13, 2003 against UNLV.

Nebraska (1-1) at Miami (FL) (2-0) – 3:30 p.m. ET, ABC/ESPN. Too bad it isn?t 1983. Regardless, these two programs have potential-and lots of brand recognition. Each is trying to become nationally relevant. A win here sure would help. The Hurricanes have played two blood donors in Bethune-Cookman and Florida Atlantic. What did we learn about the ?U?? Nothing. The Huskers took out their frustrations vs. South Alabama last week after that Hail Mary loss to BYU. Thanks for showing up, Jaguars! Now, Nebraska takes to the road for the first time. This may be the best quarterback and set of wideouts the Huskers will see all season. How will the cornerbacks respond? They haven?t been stellar so far in 2015. Look for Nebraska to ride RB Terrell Newby. Against BYU, no Husker had more than 10 carries. Against South Alabama, Newby had 28 carries for 198 yards with two TDs.

Northern Illinois (2-0) at Ohio State (2-0) – 3:30 p.m. ET, ABC/ESPN2. Another week, another chance to analyze the Buckeye quarterback situation to death. Look, we have eight weeks until Michigan State comes to Columbus. We have to fret and dissect something concerning the Buckeyes. Cardale Jones and J.T. Barrett both struggled to throw the ball last week, combining to complete just 20 of 33 passes for 181 yards. And the Buckeyes didn?t have a touchdown pass for the first time in 25 games. Jones will remain the starter, but Barrett will play. In the end, it won?t matter if left offensive tackle Taylor Decker is taking snaps vs. the always pesky Huskies. OSU will roll. But check out NIU dual-threat QB Drew Hare. He may throw a scare into Buckeye fans for, oh, five minutes.

Virginia Tech (1-1) at Purdue (1-1) – 3:30 p.m. ET, ESPNU. This non-conference schedule certainly isn?t doing Darrell Hazell any favors. First, Purdue opens at Marshall. Last week?s visit from FCS Indiana State was a needed speed bump before the Boilers jump back into the deep end. Now, here comes Va Tech. And, after that: Bowling Green comes to West Lafayette. The Boilers are better, but they aren?t ready for the Hokies, who will have arguably the best defense they will see all season. If Austin Appleby has to throw over 40 passes, Purdue figures to be in trouble. Instead, the Boilers need to ride RBs D.J. Knox and Markell Jones behind that big o-line. The Boilermaker defense needs to get after Hokie freshman quarterback Brenden Motely, who is making the first road start of his collegiate career.

Western Kentucky (2-0) at Indiana (2-0) – 4 p.m. ET, ESPN News. Time for the Hoosiers to swallow really hard. Yes, IU is 2-0. But, the Hoosiers have been tied in the fourth quarter of both games with a one-point escape vs. FCS Southern Illinois in the opener and a less-than-sensational victory vs. a school that sounds like an airport: ?Florida International.? WKU is 2-0, dumping Vanderbilt and Louisiana Tech to open 2015. This team is dangerous ? and legit. The Hilltoppers? Brandon Doughty is the best quarterback you never have heard of, hitting 69 percent of his passes for 650 yards. Is the young Indiana secondary ready?

Pittsburgh (2-0) at Iowa (2-0) – 8 p.m. ET, BTN/BTN2Go. When these teams met last year in the Steel City, C.J. Beathard came on in relief of Jake Rudock and led the Hawkeyes to a comeback 24-20 win, hitting 7-of-8 passes for 98 yards. Foreshadowing? Coached by former Michigan State DC Pat Narduzzi, the Panthers are off to a 2-0 start with wins vs. FCS Youngstown State and Akron but already have lost star RB James Conner to a knee injury and are unsettled at quarterback. Iowa has scored 31 points in both of its wins (and the defense has allowed a total of 31), showing good balance on offense. Can this attack keep purring? Iowa is trying to start 3-0 for the first time since 2009 when it started 9-0.

Rutgers (1-1) at Penn State (1-1) – 8 p.m. ET, BTN/BTN2Go. This a meeting of two teams desperate for more success. The Scarlet Knights seemingly can?t put out fires around the program. Once one is extinguished, another is set. The latest blaze: stud WR Leonte Carroo has been suspended indefinitely following an arrest after last week?s game. (That is two suspensions in less than three weeks for Carroo. I am sensing a trend. A bad trend.) Speaking of last week?s game ? it was a bummer. The Scarlet Knights let Washington State score a game-winning TD with 13 seconds left. Maybe the sight of the Nittany Lions will make RU forget all of its troubles. Maybe not. Penn State stole one from Rutgers last year, scoring a game-winning TD with 1:13 left to take a 13-10 decision and spoil the Scarlet Knights? Big Ten debut. The Nittany Lions hope to be on track after a workmanlike win in the rain last week vs. Buffalo. Is the offense OK? Christian Hackenberg is off his game, completing 48 percent of his passes for just 231 yards with one touchdown pass. Through two games last year, he had 773 passing yards and four touchdown tosses. Which team needs to win this one most?