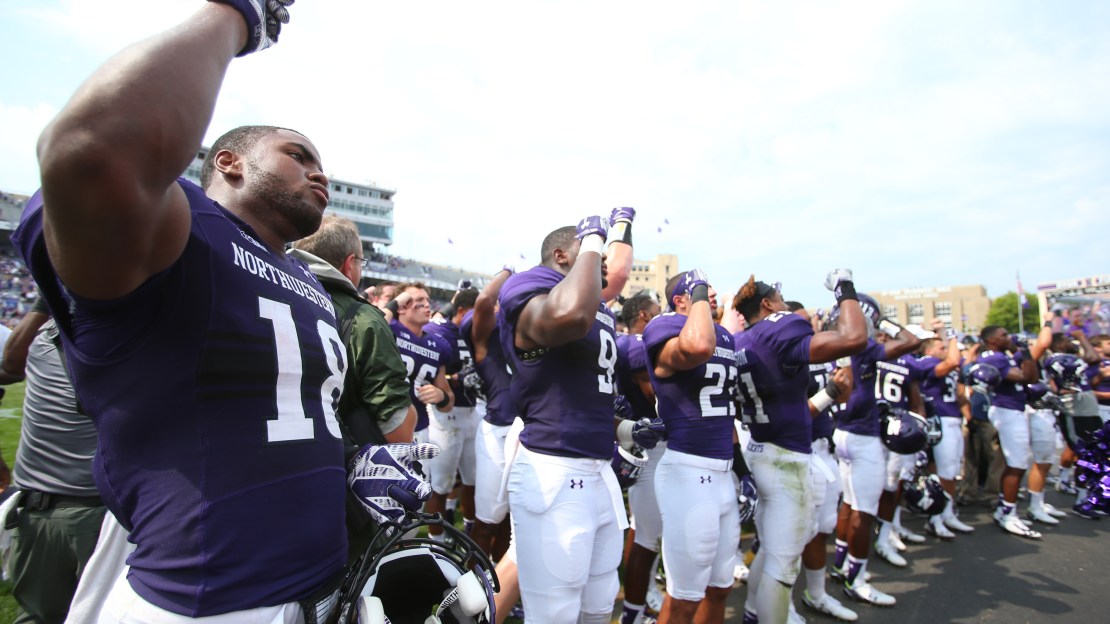 Trash talk? Between Northwestern and Duke? This is sweet. You know what they say: If you live long enough, you?ll see everything. Turns out Wildcats DE Ifeadi Odenigbo said he expects NU to shutout Duke. Blue Devils RB Shaun Wilson fired back on Twitter.

So far this season, Northwestern has allowed just six points (two field goals), while Duke has averaged 46 in its first two contests. The Blue Devils have been held scoreless just once under head coach David Cutcliffe. I actually can?t wait for this game!

I am a sucker for nostalgia. So, that?s why I pass along this galley from Pennlive.com from the 1978 Rutgers-Penn State game. The Nittany Lions won this game, 26-10.

The schools meet Saturday in State College. Each needs a win-badly.

Now this is a shake-your-head type of factoid: C.J. Beathard earned Big Ten Offensive Player of the Week honors last week ? the first time a Hawkeye had netted that award since 2011.

I guess this explains a lot.

Good news for Michigan State: Right offensive tackle Kodi Kieler will be back in the near future after leaving the Oregon game with injury. His backups did just fine.

But Mark Dantonio won?t discuss starting cornerback Vayante Copeland, who went down early in the fourth quarter with an upper-body injury and did not return. I would rest Copeland vs. Air Force, which really doesn?t pass much from its triple-option attack.

More Spartans: Michigan State catches a break, as Air Force?s starting QB is out for the season with a knee injury.

I never thought I?d use the word ?lackluster? to describe a 38-0 win. But, that?s what the Buckeyes? victory over Hawaii was. And, the QBs deserve some blame. Cardale Jones went 12-for-18 for 111 yards against the Warriors. J.T. Barrett went 8-for-15 for 70 yards. Neither threw a touchdown pass. Jones is still the starter. But, should he be?

?The approach I?ve taken is Cardale started,? Meyer said. ?He?s the starting quarterback. I met with him yesterday. J.T. has not beat him out yet. He?s going to continue to have opportunities to do that because J.T. is a very good player and Cardale?s got to perform.?

OSU has from now until Michigan State visits on Nov. 21 to figure out this QB spot.

Yes, Minnesota is 1-1, coming off a big overtime victory at Colorado State. But offensive struggles and injuries are concerns.

The Gophers have added Jon Christenson, KJ Maye and Brandon Lingen to their growing list of injury concerns. And the Minneapolis Star-Tribune notes that some fans want a change at quarterback. This is the type of stuff that can threaten a promising season. But one thing is apparent about the 2015: The defense is VERY good.

Last year?s Miami-Nebraska game got chippy. It will be important for the Huskers to keep their cool if they want to come home from south Florida 2-1.

By the end of the 41-31 Nebraska win vs. Canes last year, Jon Nyatawa of Omaha.com notes that most of the Miami players were directed not to shake hands with the Huskers to avoid further conflict. The Hurricanes exited to their locker room as boos reigned down from the Memorial Stadium stands.

?It was really physical. Very verbal,? senior cornerback Jonathan Rose said. ?They kind of made it a personal game.?

That all adds spice to this year?s clash. It?s gonna be good.

Purdue star WR Danny Anthrop had his 2014 end early because of a right knee injury that was operated on in December. Now, he has been having issues with the repair. But the senior has no plans to redshirt.

"We have no plans on redshirting him right now. I just think he's too valuable to us this year," Darrell Hazell said. "I think he's going to get better as we go along, week-to-week. That's the approach we're taking."

The kid is growing up before our eyes-and he?s stepping up, which is needed with Mikey Dudek out with injury. I really like this Illini team, especially the way the defense been playing. Can Illinois win at North Carolina?