What did Tom Dienhart learn about Big Ten in Week 2? Find out here! 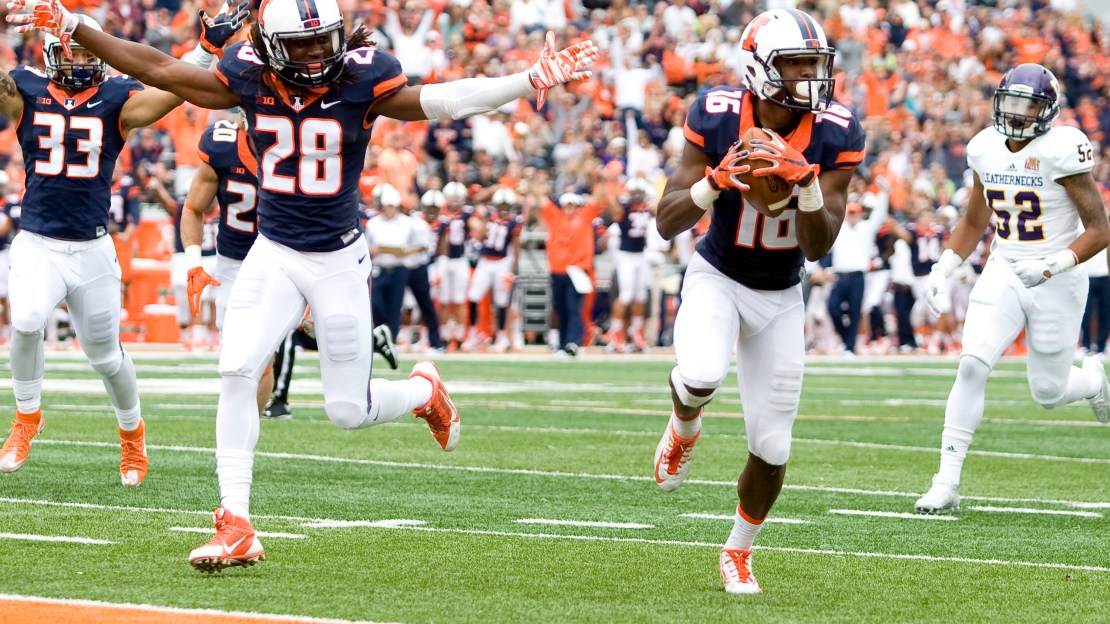 Ohio State rolled on, but does it have a quarterback problem? Did Michigan State have a ?program-defining? win? Is Northwestern legit?

Here is what I learned in Week 2:

1. Michigan State means business. The Spartans took care of business in a 31-28 win vs. Oregon, avenging last year?s loss in Eugene. Was it a program-defining win? It was a big one, yes, although we are talking about a program that is now 5-1 in its last six games vs. AP top 10 teams. With a win like this, as early as it is, the Big Ten could be looking at two playoff teams. And how about that d-line! It?s yet another brick in the mighty wall Mark Dantonio is building in East Lansing. Now, the Spartans can set their aim on winning three big road games: at Michigan, at Nebraska ? and then, the biggie: at Ohio State on Nov. 21-where MSU can avenge its other 2014 loss.

2. That Northwestern defense is for real. Two games in, including win vs. then-No. 21 Stanford, and the Wildcats still haven?t allowed a TD. I can?t believe I typed that. The Wildcats rationed Eastern Illinois 138 yards on Saturday. Stanford had just 240 yards and six points last week vs. NU. That?s 378 total yards allowed in two games-which comes to 189 yards per game. Plus, NU has generated four turnovers (and has just one). That?s championship defense. The game at Duke on Saturday is extra juicy.

3. Ohio State doesn't appear to have its starting quarterback yet. The Buckeyes flipped and flopped quarterbacks Cardale Jones and J.T. Barrett vs. Hawaii, neither of whom looked great. Is this how it?s gonna be all season? At the first sign of Jones struggling, he?s gonna get pulled? I think that?s a mistake. The Buckeyes should let Jones work through his rough spots. He has to figure out how to fight through adversity and excel when things aren?t going his way. Jones may start playing more tentative if he knows he?ll get the hook at the first sign of trouble. QB isn?t like other positions, where guys can be pulled willy-nilly. A team needs a leader. And, no this isn?t like Urban Meyer?s situation at Florida in 2006, when the Gators won a national title with Chris Leak and Tim Tebow playing. Those guys weren?t rotated/played based on a hot hand. Tebow was a situational signal-caller. This situation under center may be Ohio State?s kryptonite in the end. Start either Jones or Barrett. Pick one, and stick with him.

4. Illinois may be legit. The Fighting Illini have outscored their first two foes, 96-3. Yes, the opponents were Kent State and FCS Western Illinois. Still, this is a great beginning for a program that began the season enveloped in turmoil. Interim head coach Bill Cubit has the offense rolling. And the defense has yielded only 386 yards total-which is the huge story. Last year, the Illini ranked No. 109 in the nation in total defense, allowing 456.4 ypg. This Saturday?s trip to North Carolina will be telling.

5. I still don?t know what to make of Wisconsin after it annihilated Miami (Ohio), 58-0. The Badgers did everything they didn?t do in that opening loss to Alabama. The offense clicked (451 yards) and the defense dominated (157) to help Paul Chryst get his first UW victory. But, the RedHawks are bad. Regardless, this is what Wisconsin needed to help get on track. Good to see Joel Stave toss three TD passes and Tanner McEvoy be a Swiss Army knife weapon. Love that guy.

6. The Michigan rushing attack has potential. After the offensive line paved the way for just 76 yards rushing in an opening loss at Utah, the big boys helped the Wolverines blast for 225 yards rushing vs. Oregon State. De?Veon Smith has emerged as the workhorse back. He ran 23 times for 126 yards and three touchdowns. Smith is tough, strong and just fast enough.

7. There is hope for Penn State. Things looked bleak after that opening 27-10 loss at Temple, when the Nittany Lions flipped and flopped to just 183 yards of offense with 10 sacks allowed. In a 27-14 win vs. Buffalo on Saturday, Penn State notched 328 yards. Even better: PSU QB Christian Hackenberg wasn?t sacked. This was a baby step-a needed baby step.

8. Maryland may be in trouble. The Terps got rolled at home by Bowling Green, falling 48-27 to a squad from the MAC. The Maryland defense was torn asunder, yielding 692 yards (477 passing) and 28 fourth-quarter points. That opening win vs. FCS Richmond already seems a distant memory. And things don?t get much easier for Maryland. Its next eight games: South Florida; at West Virginia; Michigan; at Ohio State; vs. Penn State in Baltimore; at Iowa; Wisconsin; at Michigan State. Ugh. Can the Terps go 4-4 over that stretch?

9. He isn?t always pretty, but Minnesota QB Mitch Leidner gets it done. The savvy vet showed his value in a huge 23-20 overtime win at Colorado State. After a 1-of-7 start, Leidner finished 23-of-45 passing for 233 yards and two TDs. He also ran 11 times for 47 yards. Leidner hit KJ Maye for a 22-yard scoring pass with 55 seconds left to give Minnesota a 20-17 lead. This was a nice rebound from going 19-of-35 for 197 yards with a TD in the opening loss to TCU. Don?t underestimate this guy, who is the key for the Gophers having a big season.