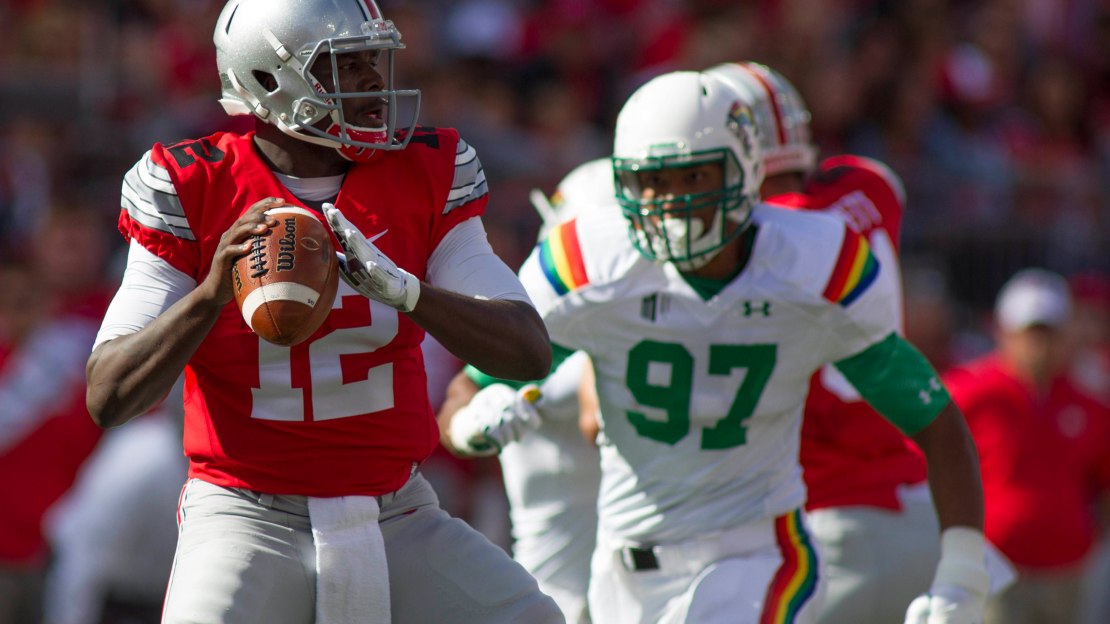 Another Saturday, another win for Ohio State. That?s 15 in a row, if you are counting. Ho-hum, right? Maybe not.

The No. 1-ranked Buckeyes moved to 2-0 by dispatching Hawaii, 38-0. But that wasn?t the real story from Columbus. Nope. The Buckeye quarterbacks were all anyone wanted to talk about-again.

It has been that way for months. And, it?s not going away until some clarity is brought to the oh-so-important position. Think of it as the nit that will be picked at-over and over and over–by pundits.

Such is life for defending national champ Ohio State, which remains on a pedestal high above the rest of the college football world. The Buckeyes are the gold standard by which all other teams are measured. They are perfection-or at least the closest thing to it. Winning seemingly won?t be enough from week to week.

This team will have its quarterback spot scrutinized and analyzed until some sense of order is established-if that ever happens. Today, it was messy. With starter Cardale Jones off mark, he was pulled and J.T. Barrett was inserted. Is this how it?s gonna work? One guy struggles, the other goes in?

Urban Meyer? He sounds confused, too.

?I still have to evaluate how we're doing that and what's the best opportunity to go down the field and score,? said Meyer to reporters after the win. ?This is — I can't recall in major college football history when I remember witnessing something like that, where you have two good guys. I have to self-evaluate too and make sure we're doing the right thing by those guys.

?I'll have more answers for you after I think it through and watch the film. The way my mindset is who is going to help us right at that moment.?

Why not let Jones-who hit 12-of-18 passes for 111 yards vs. Hawaii–fight through his rough start instead of putting in Barrett, who was 8-of-15 for 70 yards? Jones won the job, right? He can be pulled that easily?

Learning how to deal with adversity is good. Jones didn?t really have any during his magical three-game march at the end of last season, when he led Ohio State past Wisconsin, Alabama and Oregon and into college football lore as one of the sport?s most improbable champs ever.

Knowing you?ll get yanked if you struggle can?t be good for a quarterback?s psyche. And who does the offense look to as the leader? Can you really swap QBs like you swap, say, left guards?

This white-hot Ohio State quarterback situation that was discussed and debated-Who should start?–the moment the last strand of confetti from the 2014 national championship party was swept up rages on.

And, that?s not good.

What seems like an optimal situation-having two highly skilled and qualified quarterbacks-may not be such a great thing in the long run.

When asked on Saturday how he thinks he has handled the quarterback situation so far, Meyer became short.

?How do you think I've handled it?? shot Meyer. ?We're 2-0. Would you like a grade or something, how have I handled it?

?I wanted to throw them both. J.T. had 15 opportunities to throw the ball. Cardale, 18. That doesn't include the pressures and the scrambles. Because we did not protect very well today. We have to get that fixed.?

Some are quick to point out: Meyer has used two quarterbacks successfully in the past. Remember 2006? You know, when he rode Chris Leak and Tim Tebow to the national title at Florida? That?s true, but Leak and Tebow weren?t pulled/inserted based on who had the hot hand-which appears to be the M.O. of the 2015 Buckeye staff with Jones and Barrett. Leak was the No. 1; Tebow was a situational weapon.

?We?re gonna go with my opinion in that moment because you really can?t have too many people?s input because all it does is confuse the situation,? Meyer said after the Tech game. ?J.T. has to stay warm and if J.T. is in the game, Cardale has to stay warm. Is that the right thing to do? At this point it is. Will that change throughout the year? I don?t know.?

All offseason, Meyer would not tip his hand as to who the starter was going to be, waiting right until the offense came onto the field for its first series of the season last Monday before America discovered postseason hero Jones would be the man over regular-season superstar Barrett. (I never did see the logic-or advantage-to waiting so long to make this decision.)

Jones looked solid in the 42-24 opening win at Virginia Tech, hitting 10-of-19 passes for 187 yards with two touchdowns and a pick. With the game in hand, Barrett came on late. That seemed reasonable use of both guys.

So, why did Meyer tab Jones in the first place?

?The way I looked at it, Cardale finished the season as the starter and that kind of started the thinking that he had to get beat out and he wasn?t beat out, it was very close,? Meyer said after the win vs. the Hokies. ?I almost went to J.T. earlier but it was such a pressure game that with Cardale?s size I thought he could get over the top and their defensive front was all over the place and that was the decision.?

In the end, Ohio State marched on today. And, that?s what matters. The Buckeyes should cruise through their next eight games before Michigan State comes to Columbus on Nov. 21 for a huge showdown. How will the Ohio State quarterback situation look then? More importantly: Will the quarterback spot have any negative repercussions for this mighty Ohio State team and its quest for perfection and another national title? An effort like today won?t cut it.

"We did not execute well," Meyer said.

"It wasn't a performance that I wanted," said Jones, who had two fumbles.

Meyer has said he wants to use them both. But, is that really practical? Or smart for a team that seemingly has it all (skill players, great defense, special teams) to be kings of the sport again? Meyer is paid millions of dollars to make decisions. He needs to make one at quarterback-and let it ride.