Wes Lunt Q&A: 'He's a player's coach and wants the best for us' 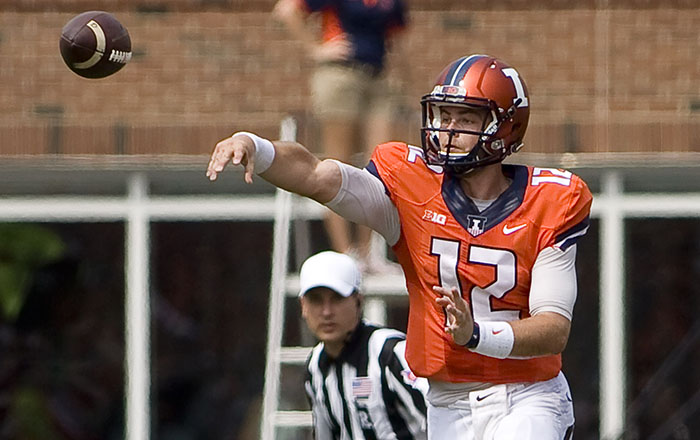 Everything is new again for Wes Lunt. And that?s good. The Illinois junior quarterback needed to hit the reset button.

Lunt?s debut at Illinois didn?t go as expected after he transferred back to his home state from Oklahoma State. Lunt dealt with injury and ended up giving way to Reilly O?Toole at the end of the year. Lunt didn?t even play in five games. He was anointed the starter in the offseason ? then saw the coach who lured him to Champaign get fired a week before the season and offensive coordinator Bill Cubit named interim head coach.

I caught up with Lunt-who hit 63.5 percent of his passes in 2014 for 1,763 yards, 14 touchdowns and three interceptions–as he prepped to play host to FCS Western Illinois on Saturday.

Q: How key was it to get off to a good start this season, given the tumult around the team?
A: The opener went well. We hadn?t had a big win for a while, scored a lot of points, and the defense did a good job making the offense?s job easier with good field position all day. It was a good day for our whole team.

Q: How are the wideouts coming together?
A: They are getting better every day. They always are in the film room watching. Coach Cubit does a good job with those guys, and Coach (Mike) Bellamy, too. Every week, they get better. There are a lot of good players in that film room.

Q: Have you been pleased with your development?
A: I think I had a good offseason. I worked hard with the receivers and the line. I think the biggest things I am trying to do is avoid hits and moving in the pocket and not rolling out when I don?t need to ? staying in the pocket and moving that extra foot to get that pass off. We have been drilling since January and I have improved.

Q: What were your thoughts and emotions when you heard Tim Beckman was being fired?
A: I was very surprised. The timing of it was the biggest shock to everyone, and how it just kind of happened. I never had been through anything like that and didn?t know what to expect. I feel bad for him and his family. But Coach Cubit has done a good job keeping things similar for all of us. Every day, it gets a bit more normal as we move along without Coach Beckman.

Q: What were some of the first things Bill Cubit said to the team after taking over?
A: He loves us and told us that it is our team and wanted to help guide us. He?s a player's coach and wants the best for us. He wants us to approach him if we have a question or problem. He has done a good job keeping the same kind of scheduling as Coach Beckman. He doesn?t want us to get out of our comfort zone.

Q: Have you taken on more of a leadership role?
A: I would say so. Being the guy this year and not really competing. I have been named the guy since January, which has helped a lot. Everyone has been behind me. And being a captain, you are in position to speak up when needed. As every week goes by, I get more vocal.

Q: Do you have a favorite pass play?
A: I don?t. There are a few I don?t like. Coach Cubit does a good job. His systems are complicated at first. But every play, you are keying one or two guys and it makes it really simple for the quarterbacks. The receivers are on the same page.

Q: Is it bowl or bust for Illinois this season?
A: A bowl, absolutely. But now, we are just thinking about Western Illinois and taking it a week at a time. We are 1-0, starting off good. That is all you can ask for after a week. We need to continue that mind-set.