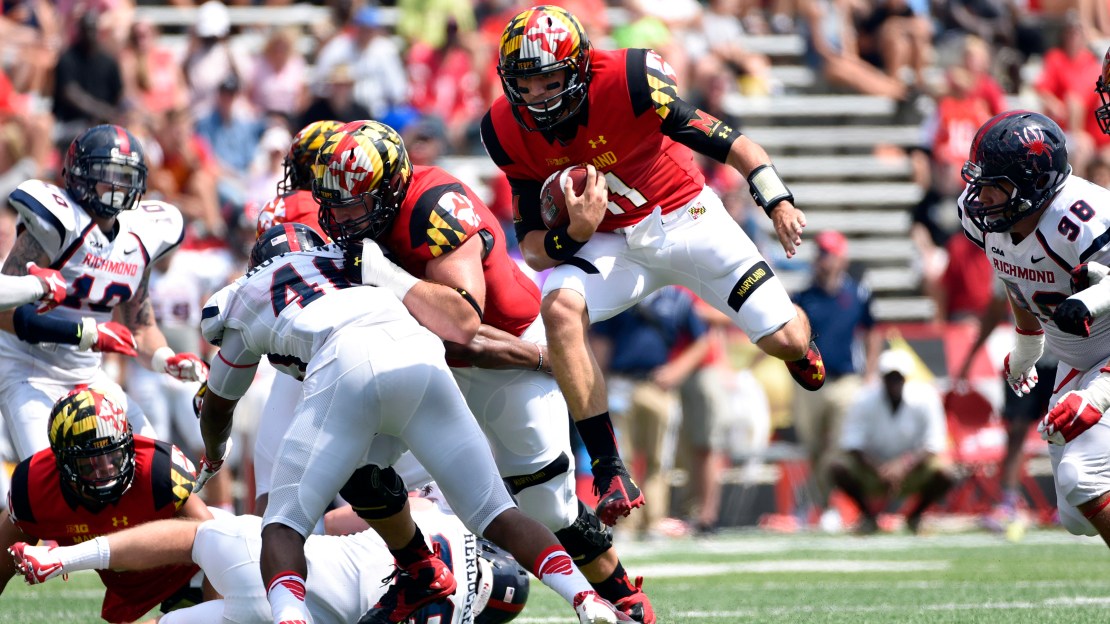 It?s that time when I reach into my big burlap mail sack, pull out letters, start reading ? and then cry. Let?s answer some of your more pressing queries while planning a parade route for Ohio State in January.

Do you think Harbaugh will continue to go with Jake Rudock throughout the non-conference season? Do you see Shane Morris getting some quality snaps in any games prior to the opening Big Ten game against Maryland? – Kenneth Gay

Well, Harbaugh recently came out with strong vocal support for Rudock. I linked to it recently in Daily Links. So, it sounds like Rudock is the guy. Get used to it. He did some nice things at Utah and is a workable solution for 2015. Some felt Harbaugh may play both QBs to help differentiate. But that does not look like it will happen.

OK performance by Terps' QB Perry Hills in the opener. But I have a gut feeling that Caleb Rowe or transfer Daxx Garman will likely be the starter come conference schedule. Rowe is still recovering from an ACL injury and had a bad camp. Garman still is learning the offense. What are your thoughts on the QB situation at Maryland? – Josh

Interesting observations. None of the QBs really wowed when we were in College Park in August. Hills was the front-runner then, but he is pedestrian. Rowe could be the guy, but I was under the thought he was healthy. Garman is a nice talent. He does have a lot to learn; OC Mike Locksley told me as much in August. I am sure Garman is about up to speed. I doubt Hills is a ?rock solid? starter, so this spot could be interesting. But, I don?t think any of the choices will look much different from the other. There is no ?star? in the group.

What options does Purdue?s Darrell Hazell have at quarterback? Do you keep playing Austin Appleby, who appears not to be improving? Or do you opt for a new QB? The rest of the team seems to be at a place where it can win a few more games. – Jim Brooks

Good observations. The quarterback spot continues to be a big drain on Hazell?s program. Robert Marve was the last semi-decent signal-caller Purdue had-and he was damaged goods. The fact Danny Etling did not pan out was a big blow to a program that has opened each of the last five seasons with a new QB. That turnstile has to stop. Appleby doesn?t look like the answer. Why not look at redshirt freshman David Blough or true freshman Elijah Sindelar, if he is healthy? What does Purdue have to lose? Purdue has an apparent identity as a power-run team behind a big, veteran line and two good young backs. But, again, the quarterback? You saw what I saw on Sunday. Yes, Appleby did lots of good stuff. But a guy with Appleby?s experience can?t make those game-killing mistakes-yet, he did ? twice. He is now 1-7 as a starter with seven losses in a row.

Look, any decision Urban Meyer made at quarterback would have worked, right? C?mon. People make it seem like there was a big difference between the two. It?s like picking which super model to date: Can you really make a bad call?

How differently might have the Ohio State at Va Tech game played out had there not been suspensions? – Lee Lyons

Ohio State would have won 140-0. Just kidding. Having DE Joey Bosa and H-backs Jalin Marshall and Dontre Wilson with wideout Corey Smith would have helped the Buckeyes. But, I don?t think the final score would have looked much different. OSU was just way better than Tech at every spot. Can anyone derail this Buckeye juggernaut?

Do the Huskers have a chance to win the Big Ten West even with the loss to BYU? Also, what are the other games we will lose? – Ryan

Sure, Nebraska still can win the West. The likelihood of that gut-punch loss to BYU having an impact on that quest isn?t likely since it?s a non-league game-and many tiebreakers involving league play figure to come into play to determine a division champ if there is a tie. As for other possible losses ? well, there are few potential ?potholes? lurking. The trip to Miami (Fla.) is scary, as are visits from Wisconsin, Michigan State and Iowa. And a trip to Minnesota could be scary. Bottom line: buckle up.