What did Tom Dienhart learn about Big Ten in Week 1? Find out here! 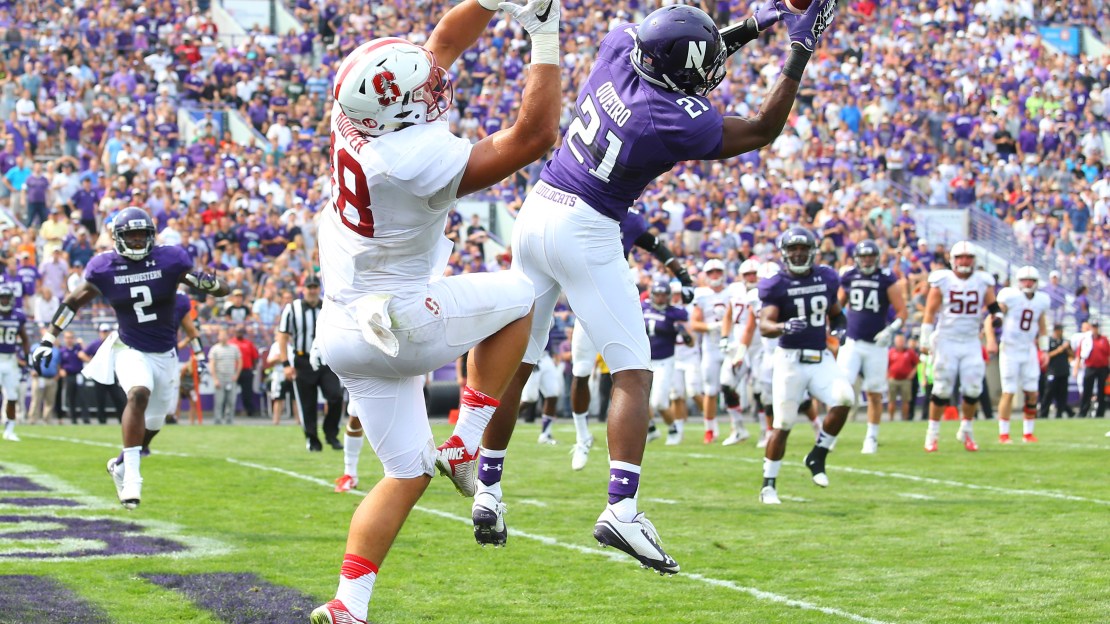 Yes, it was a tough opening week for the Big Ten, which went 8-6 to open the 2015 campaign. But, the league also had a rough beginning last season-and things turned out quite well for the conference.

1. Michigan State will be OK at running back. Yes, Jeremy Langford left a big void. But three backs ran 35 times for 190 yards in the opener. True freshman LJ Scott turned head with 77 yards on 13 carries; Gerald Holmes had 54 yards on nine attempts; Madre London carried 13 times for 59 yards with two TDs in a 37-24 win at Western Michigan.

2. Michigan will win its share of games if it can amp up its rushing attack and cut down on turnovers. The Wolverines ran 29 times for 76 yards. And that comes to 2.6 yards per carry. That won?t cut it. A veteran offensive line must do a better job in getting a push. A better rushing attack will take pressure off Jake Rudock, who threw 43 passes with three picks in a 24-17 loss at Utah. That?s too many passes.

3. I don?t want to put too much emphasis on what Wisconsin did. After all, the Badgers were playing mighty Alabama, which was ranked No. 3. Not many teams would look good vs. that juggernaut-especially if your team is breaking in a reworked o-line and lost its best defensive and offensive player during the game. Wisconsin will be OK. Just give the Badgers time. QB Joel Stave looked good. Still, having said all that, I am still a bit worried about the offensive line and its three new starters.

4. Northwestern looks tough. And, that has been an issue the last two seasons, which resulted in 5-7 marks each year. The Wildcats looked physical, strong and nasty along the offensive line in rushing for 225 yards in an impressive 16-6 home win vs. No. 21 Stanford. Maybe Northwestern can be a factor in the wide-open Big Ten West this season.

5. Penn State looks a lot like it did last season. And, that?s not ideal. In a 27-10 loss at Temple, the offensive line once again had issues pass blocking, as Christian Hackenberg was sacked 10 times after getting bagged 44 times last season. He hit just 11-of-25 passes for 103 yards with no touchdowns and one pick. The offense finished with just 180 yards (77 yards rushing; 103 yards passing) and the attack floundered after staking PSU to a 10-0 first-quarter lead. The Nittany Lions ran 24 plays in the second half for a scant 31 yards.

6. Illinois and Rutgers were focused. It was difficult to anticipate how each program would respond coming off some tumultuous days. The Illini fired Tim Beckman a week before the opener, turning to OC Bill Cubit. Rutgers coach Kyle Flood has been under the microscope for contacting a professor; then saw five players get arrested and then booted from the team. Despite those distractions, both teams thrived. Illinois crushed Kent State, while Rutgers smashed FCS Norfolk State.

7. Nebraska has work to do on both sides of the ball. The defense allowed 511 yards to BYU (132 rushing; 379 passing). And the rushing attack needs more oomph after notching 126 yards on 37 carries (3.4 ypc). The Husker offense probably will be best off if Tommy Armstrong isn?t throwing 41 passes, like he did vs. BYU for 319 yards and three TDs.

8. The season could not have begun any better for Iowa. Some pundits felt the Hawkeyes were poised to be upset by FCS Illinois State. But, the game never was in doubt, as Iowa cruised to a 31-0 lead early in the fourth quarter on the way to a 31-14 win. The play of the offense was most pleasing, as QB C.J. Beathard excelled in his first start at Kinnick Stadium, hitting 15-of-24 passes for 211 yards with a TD and RB LeShun Daniels ran 26 times for 123 yards in a balanced attack that had 431 yards (210 rush/221 pass) behind a revamped line that impressed.

9. There?s reason for some optimism at Purdue. The Boilermakers lost at Marshall, becoming the first Big Ten team to lose to the Thundering Herd, but the defense was solid and the offense has an identity: physical running behind a big, veteran line and two promising backs in sophomore D.J. Knox and true freshman Markell Jones. More explosive plays are needed in the passing game for the Boilermakers to improve in Darrell Hazell's third season. QB Austin Appleby is what he is: A very limited weapon who isn?t going to win a game for this team. He is now 1-7 as a starter and tossed four picks in a loss at Marshall, including two returned for TDs.

10. Ohio State is as good as advertised. The Buckeyes whipped Virginia Tech despite having four key players suspended. The Buckeyes are loaded with an arsenal of weapons on offense that will be difficult for any defense to stop. The newest weapon, quarterback-turned-receiver Braxton Miller, looked fantastic in his first start as a receiver. And the defense is tough and talented. This squad looks better than the one that won the 2014 national title. Scary. Now, sit back and watch OSU cruise to a 10-0 start before welcoming Michigan State on Nov. 21.