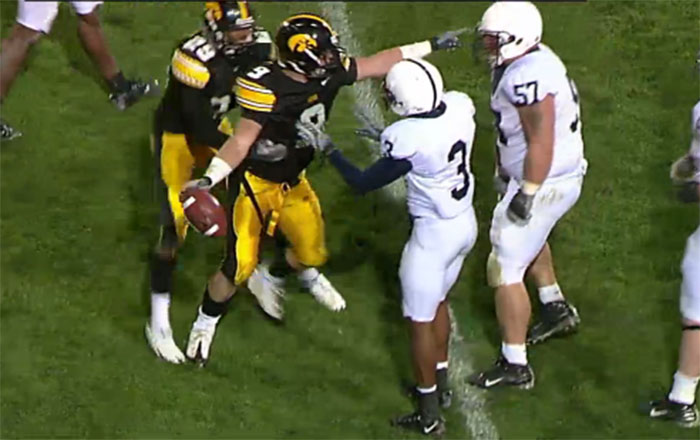 (AP) The Iowa state medical examiner says Tyler Sash, a safety who won a Super Bowl with the New York Giants after starring at the University of Iowa, has died at the age of 27.

John Kraemer, the director of forensic operations for the medical examiner, tells The Associated Press that his office is investigating Sash's death along with police in Oskaloosa, Iowa, Sash's hometown. No cause of death has been determined, but an autopsy is scheduled for Wednesday morning.

Sash started 37 games for the Hawkeyes from 2008-10, earning first-team All-Big Ten honors in 2009 and 2010. He was fourth all-time in interception return yardage in the Big Ten when he graduated, and his 13 picks were fifth-best in school history.

Iowa released an official statement on the matter late this afternoon, after postponing Kirk Ferentz's Tuesday press conference "due to a private issue, unrelated to game preparation."

Ferentz had the following to say in the release.

?We are all very saddened to hear about the untimely loss of Tyler,? Ferentz said. ?It is always so difficult when it involves someone this young. Our heartfelt condolences and prayers go out to Tyler?s family during this extremely difficult time - and we want them to know they are not in this alone. The commitment, passion, and excitement that Tyler brought to football and to life will always endear him to Hawkeye coaches, teammates, and fans. He touched our hearts in many ways and will be missed by all of us.?

Devastating news to hear about a great friend & teammate in Tyler Sash memories with us will live on forever you're in a better place now.

Sad to hear that my #HAWKEYE brother Tyler Sash has pass away. Rest at ease my man. RIP#hawkeyenation

Saddened by the tragic news. Rest In Peace Tyler.

So difficult to wrap my head around this. You'll always be my brother. RIP Tyler.

Sad news for all of #HawkeyeNation. My thoughts and prayers are with the Sash family. You will be missed Tyler, but never forgotten...

From the day we met all we talked about was making plays for Iowa and together we did. I'll love you forever brother. pic.twitter.com/KpwsGEu1oE

I will miss Tyler's unparalleled passion for football and his contagious enthusiasm for life. I will cherish our every memory. RIP #TSwag

Damn! Gone too soon @TSash. This one hurts

Damn man. You never know the demons someone else is facing. It's a sad day when you lose a brother. R.I.P. Tyler Sash.

Sad news to hear of @TSash passing, he was a teammate growing up and a good friend. Someone that would always have your back.