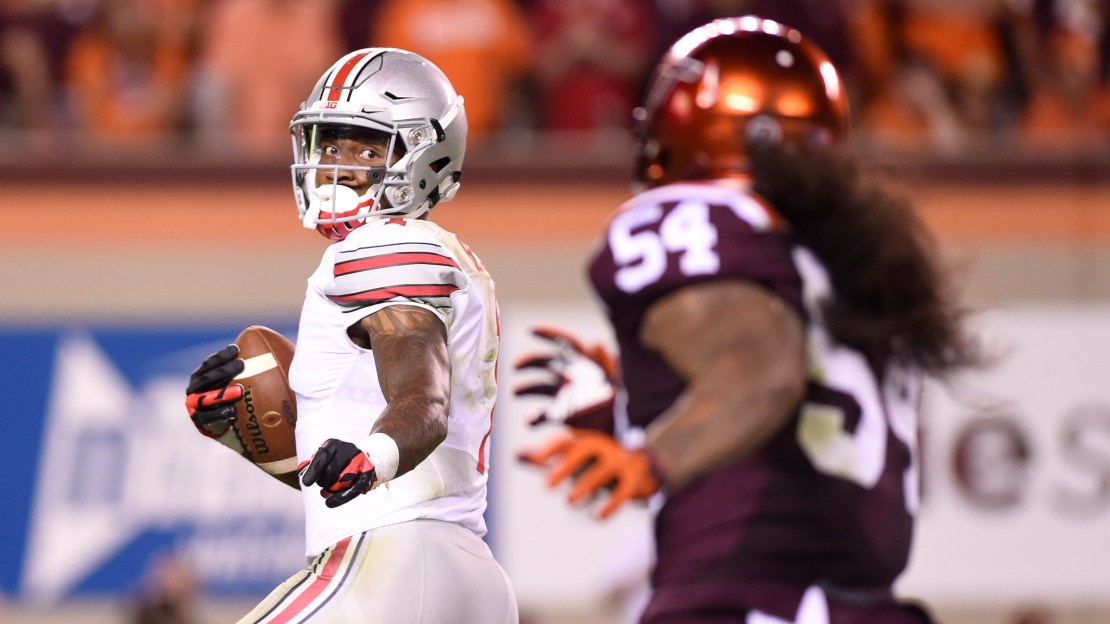 Who else made their lists?

1. Braxton Miller, WR, Ohio State. One word: spin-o-rama. Nothing more needs to be typed-except for this: genuflect before Miller.

2. William Likely, CB, Maryland. Look, anytime you break a record held by the dipped-in-bronze Nile Kinnick, you know you are special.

3. Anthony Walker, LB, Northwestern. The Wildcats? season-opening win vs. Stanford was all about the defense. And the NU defense was all about Walker, who had a career-high 10 tackles with three TFLs, two PBUs, a fumble recovery and half a sack. Walker also hit the library Saturday night to do thermodynamics homework. What a guy.

4. Leonte Carroo, WR, Rutgers. Maybe the guy should get suspended for the first half of every game. Worked well last week. Sure, Carroo caught just three measly passes. But they went for 129 yards and three TDs. Efficient.

5. Ezekiel Elliott, RB, Ohio State. Just in case you forgot what a totally bad mamba-jamba Elliott is, he reminded you on Monday night. Did his 122 yards rushing on 11 carries refresh your memories of his 2014 godliness? Good.

1. William Likely, CB, Maryland. He had a historic day on Saturday, which included a Big Ten-record 233 punt return yards and a touchdown. He also had two kickoff returns for 63 yards. I'm no math expert, but that's nearly 300 total return yards. That's good enough for No. 1 on my list. No question about it.

2. Braxton Miller, WR, Ohio State. The Big Ten's most exciting player is back, and that's a good thing for the conference. Miller looked like a natural at his new wide receiver position, hauling in two catches for 78 yards and a touchdown, while adding 62 yards on the ground, including a highlight touchdown run that looked like a play straight out of a video game.

3. Jordan Howard, RB, Indiana. There were plenty of fresh faces in Big Ten uniforms, but Howard was the best of the bunch. The UAB transfer was outstanding in his Indiana debut, rushing for 145 yards and three touchdowns. This guy could be the Big Ten's leading rusher this season, he's that good.

4. Leonte Carroo, WR, Rutgers. After sitting out the entire first half of the game due to a curfew violation, Carroo wasted little time making his presence felt. The preseason All-Big Ten wideout caught three passes, all of which went for touchdowns. That's impressive.

5. Ezekiel Elliott, RB, Ohio State. This guy was my No. 1-ranked player heading into the season, so I can't leave him off the list after putting up 138 total yards and a touchdown against a solid Virginia Tech defense. Oh, by the way, he did that on just 13 touches (11 runs, 2 catches). That's going to change in the upcoming games.