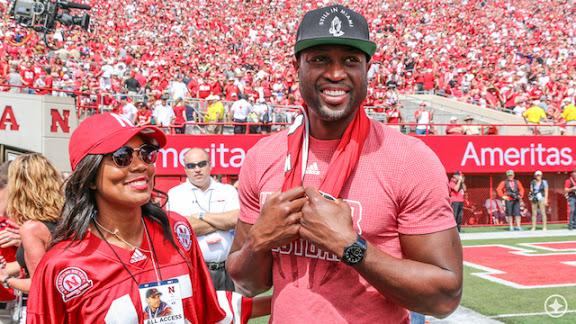 When it comes to Big Ten celebrity fans, Gabrielle Union is one of the biggest names around.

Union is an Omaha native and a huge Huskers football fan.

Union is in attendance at today's Nebraska vs. BYU game, and it looks like she brought her husband, NBA star Dwayne Wade.

@HuskerFBNation captured the following images of Union and Wade before today's game, which can be seen at the top of this post.

Union is sporting her Tommie Frazier Huskers jersey at the game, which can be seen in this sideline photo from @NebraskaonScout.

You can also spot some Huskers gear on Wade, who chimed in on Twitter, sending out the following tweet this morning.

ok ok! it's time to see why part of my house is decorated with Nebraska memorabilia. Headed to Lincoln for my very first @Huskers game.

The two spent some time touring the football and basketball facilities, while also playing a little catch before the game kicked off.

Little pregame throw and catch with @itsgabrielleu and @DwyaneWade before the #Huskers take on BYU. pic.twitter.com/VBVqlx03c0